PETALUMA, Calif., Jan. 3, 2017 /PRNewswire/ -- Athleta is starting 2017 with the launch of a Power of She campaign showcasing the power of women coming together to create social impact through a foundation of health and wellness.

The new campaign builds on the Power of She platform the brand launched in April 2016.  The Power of She brings to life the brand's mission to ignite a community of active, confident women and girls to reach their limitless potential and celebrates the power of sisterhood with the mantra "Alone We Are Strong, United We Thrive." 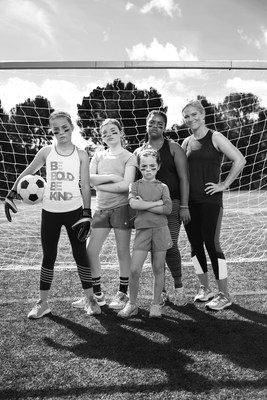 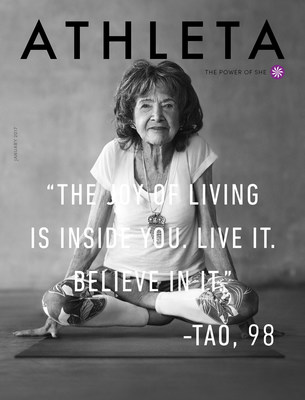 "Athleta stands for inclusivity," said Athleta President Nancy Green.  "We want to break down stereotypes and help redefine perceptions of wellness and strength while celebrating the power of the female collective to make an impact."

The centerpiece of the campaign is a collection of stories each highlighting one 'power' of Power of She – including positivity, potential, community and confidence:

Positivity: Tao + TerriAt 98 years old, Tao Porchon-Lynch is the world's oldest yoga instructor whose philosophy is "there is nothing we cannot do if we harness the power within us."  She and Dr. Terri Kennedy collaborated on a book about Tao's life Dancing Light: The Spiritual Side of Being and travel the world together to inspire and impact the lives of women across the globe.

Potential: Audrey + Estelle + Melanie + KimiWhen Audrey 's daughter Estelle was born with Down syndrome, she helped create Club 21 Learning and Resource Center as a community for parents of children with Down syndrome dedicated to including people with Down syndrome in society.  She partnered with local studio Rose City Yoga, where instructors Melanie and Kimi lead classes teaching their students confidence and the power of their potential.

Community: Clancy + Kristen + RomaThis trio of athletes turned their passion for running into a way to support and bring awareness to maternal health for women around the world through Every Mother Counts (EMC).  Clancy, Kristen and Roma participate in races to raise awareness and funds to provide skilled healthcare to new and soon-to-be moms around the world.

Confidence: Kate + Ella + AliceKate T. Parker is a professional photographer who takes photos of girls the way they are naturally – in her words, "silly, adventurous, frustrated, happy, athletic, fierce, funny." She has collected her photos in a new book Strong is the New Pretty (Workman Publishing; available in March) celebrating the strength and spirit of girls being 100% themselves.

"These women embody the Power of She and represent the impact each of us can have in our community and in the world," added Green.

Each of the stories will be prominently featured in Athleta's catalog, in its stores and across digital channels.  The brand's Chi Blog hosts the campaign content and where Athleta has also added resources for women who are inspired by the campaign to get involved with the organizations featured.  The brand will be hosting in-store events throughout the campaign to give women and girls the chance to showcase their Power of She.

Additionally, Athleta announced that it is a member of #SeeHer, a movement to accurately portray all women and girls in media spearheaded by the Association of National Advertiser (ANA)'s Alliance for Family Entertainment.

"We are delighted to have Athleta and their new campaign 'The Power of She' join our #SeeHer movement.  Athleta's portrayal of women as strong, smart, beautiful, fun and fearless is a valuable addition to our mission of championing an accurate representation of women in media.  We applaud Athleta for amplifying this important message," said Stephen Quinn, Chairman, ANA Alliance for Family Entertainment.

In support of its goal to increase the accurate portrayal of women in media 20 percent by 2020, the group created a proprietary Gender Equality Measure, GEM™ in which ad content is compared to thousands of other ads.  In the analysis, executed by #SeeHer research partner ABX, Athleta's 2017 Power of She launch video scored in the top 1% of approximately 10,000 ads measured for its portrayal of women and girls.

ABOUT ATHLETAAthleta creates versatile premium performance apparel designed by women athletes to inspire a community of active, confident women and girls to reach their limitless potential. Founded in 1998, Athleta integrates performance and technical features across its collection to carry a woman through her life in motion.  In 2016 the company launched Athleta Girl mirroring its signature performance in styles for the next generation. Based in Petaluma, CA and a Gap Inc. brand (NYSE:GPS), Athleta apparel is available at its 130 retail stores across the country, through its catalog, and at www.athleta.com.