LOS ANGELES and NEW YORK, Dec. 13, 2018 /PRNewswire/ -- New research by Parrot Analytics and Kagan, a media research group within S&P Global Market Intelligence, shows support for one of Netflix's most important strategic goals: To have 50% of its content be comprised of Netflix originals. According to the report, which leverages Parrot Analytics' globally standardized Demand Expressions® metric1, demand for Netflix Originals is estimated to overtake the share of demand for licensed titles by October 2019. 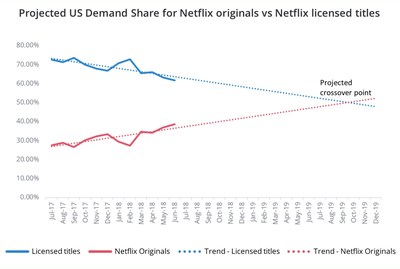 Parrot Analytics, the leading big data TV analytics firm specializing in audience demand measurement worldwide, and Kagan joined forces to produce a comprehensive report on demand for television content across streaming subscription video-on-demand (SVOD) platforms in the United States. Overall, the report found demand for content on all major SVOD platforms, including Netflix, Hulu, HBO Now, Showtime, and Starz, has increased over the past year.

In its analysis of demand for Netflix's content, the report compared the sum of U.S. demand for both Netflix original series and the licensed titles available on the U.S. Netflix service each month. While currently the most in-demand content tends to be licensed titles, the proportion of the demand share from Netflix original titles has generally grown month over month. Overall, for the 12 months analyzed, the demand share for Netflix originals grew an average of 1.0% each month. From July 2017 to June 2018, the streaming service's reliance on licensed content dropped by 10.9%. Based on this 12 months of data, the report forecasts that Netflix will generate 50% of U.S. audience content demand with its own original content from October 2019 onwards.

For the premium channel VOD platforms (HBO Now, Showtime, and Starz), new content from their linear channels tends to be the most in-demand. However, Parrot Analytics affinity analysis2 reveals that the respective back catalog of each VOD platform continues to play an important role, indicating that older titles likely remain an important driver of subscriber loyalty.

"The future for the industry is likely to be even more crowded and the winners are still unknown," said Deana Myers, Research Director, S&P Global Market Intelligence. "Walt Disney is expected to debut its SVOD service in 2019 and its proposed buy of the studio and libraries of 21st Century Fox will add a vast amount of content to this service. Other anticipated SVOD launches include those by Apple and Warner Media. We estimate the overall US SVOD industry has many strong years of growth in its future, particularly as competition from Disney and Apple could impact the market."

Other new entrants to the online video space, like Facebook Watch, YouTube and DC Universe, are also investing heavily in originals and acquired content. At the same time, content spending for Netflix, Amazon and Hulu is expected to continue to grow at double digit rates.

For the full report, visit: https://insights.parrotanalytics.com/svod-tv-demand-2018

2 Affinity is a measure of the relationship between two shows based on the number of people who watched both titles on video download and streaming platforms as tracked by Parrot Analytics' patented technology.

Increased use of digital channels opens door to a bright 2021 for ...