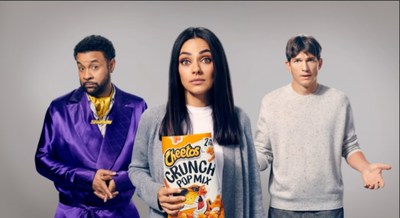 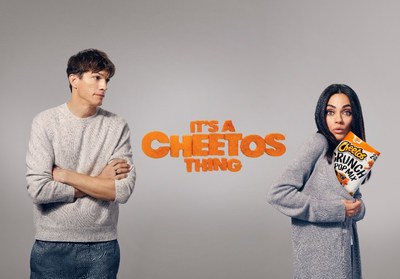 Fans were left stumped with the release of teasers, "Evidence" and "Advice," wondering about the evidence Kutcher found. What could Mila have done? What advice did Shaggy offer her? All their questions are finally answered [see here] as Ashton continuously catches Mila 'orange-handed' around the house — eating his bag of Cheetos Crunch Pop Mix. But every time he questions her, Mila has the perfect response: "It Wasn't Me," thanks to Shaggy. The release of the commercial for Super Bowl LV also marks the 20th anniversary of the retail release of the reggae icon's timeless hit "It Wasn't Me."

"Mila and I both remember when 'It Wasn't Me' came out 20 years ago when we were first working together on That 70s Show, so it's really cool to come full circle with Cheetos, work together again and remix this song," Kutcher said. "We've rarely done projects together since then, but the concept was so fun and relatable. And we couldn't pass up the chance to be in this Super Bowl commercial."

With the release of Cheetos Crunch Pop Mix – a delicious combination of two fan favorites in Cheetos Popcorn with Cheetos Crunchy – last month, Chester Cheetah mock-warned fans to keep their eyes peeled for any Cheetle-coated surfaces as this would be the most sought-after snack in their pantry. He even issued his own survey to back-up his theory: According to a recent consumer survey commissioned by Cheetos, nearly half of Americans (48 percent) admit to sneaking snacks from friends or loved ones, and among those, one in four (25 percent) even admit to doing it with some regularity*.

"Cheetos burst back onto the Super Bowl scene last year and this year's Cheetos campaign is no different, perfectly depicting the lengths our fans will go for their Cheetos," said Rachel Ferdinando, SVP and Chief Marketing Officer, Frito-Lay North America. "And to be able to partner with Ashton, Mila and Shaggy, whose comedic delivery and timing brings this campaign to life, is truly amazing and something I'm sure the millions of viewers tuning into the Super Bowl will love — and relate to."

Snap to Steal In a first-of-its-kind activation, this year's Cheetos Super Bowl spot is giving fans the opportunity to snatch their own bag of Cheetos Crunch Pop Mix directly from the commercial when it airs on Super Bowl Sunday. All fans need to do is simply open Snapchat, point their camera at the new Cheetos commercial and hold down on their screen to unlock a free bag of Cheetos Crunch Pop Mix.

To let fans in on this gameday hack, a national snap lens starring Chester Cheetah goes live Sunday morning, styled like a secret video call, giving the scoop on how to scan and steal Cheetos Crunch Pop Mix from the spot.

Cheetos is also giving fans the chance to win a year's worth of Cheetos and swag every time the defense steals the ball during Super Bowl LV. Anytime a turnover happens in the game, Chester will send out a Turnover Tweet where fans can enter to win epic Cheetos swag. Follow @ChesterCheetah on Twitter for more information on how you can win big on Super Bowl Sunday.

Finally, fans living near Brooklyn, New York can scan the QR code included in a Cheetos advertisement on the corner of Wythe and North 10th to score a free bag of Cheetos Crunch Pop Mix, now through February 7, or until supplies last.

TikTok Challenge Following Super Bowl Sunday, Cheetos will be launching a TikTok challenge for fans to create their own version of the Super Bowl commercial, singing "It Wasn't Me" in response to a handful of up-and-coming creators. This campaign is rooted in the brand's mission to inspire and encourage fans to express their creativity with a bit of a mischievous twist.

Frito-Lay Dominates Super Bowl LV The Cheetos commercial will be one of three brand campaigns from Frito-Lay on Super Bowl Sunday, making it the broadest presence the company has had to date during the Super Bowl. The Doritos campaign will feature the return of the highly anticipated Doritos 3D Crunch and a new look for #FlatMatthew. And for the first time, the Frito-Lay portfolio of brands will premiere a Super Bowl Sunday commercial that includes the most NFL legends ever featured in a PepsiCo commercial.

Tostitos and Danny Trejo Give Fans 'Five Ways To Cinco' this...