INDIANAPOLIS, April 8, 2021 /PRNewswire/ -- In a series of humorous videos on social media this week, racing legend Jimmie Johnson finds the missing No. 48 Honda NTT INDYCAR SERIES car safe in the hands of his teammate, 2013 Indianapolis 500 Winner Tony Kanaan. Fans positively reacted to the Twitter and Facebook campaign in posts by Chip Ganassi Racing and The American Legion showcasing Kanaan answering phones at The American Legion National Headquarters in Indianapolis, hiding from Johnson and channeling his 20th run in the Indianapolis 500 in the red, white and blue American Legion livery. 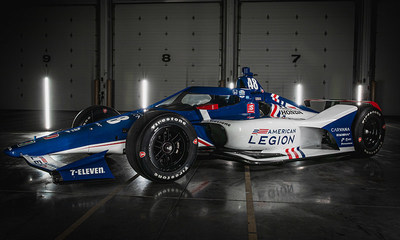 "I'm excited to work with The American Legion this year," Kanaan said. "Jimmie and I had some fun filming the unveil videos. This livery is really sharp looking, and I'm so happy to be running my 20th Indianapolis 500 in it. The American Legion is an important resource for veterans in helping make sure they get the benefits they have earned through their service, and I am proud to represent them, and all veterans."

The American Legion, the nation's largest veterans service organization, is using its presence in INDYCAR to elevate awareness and introduce a new modern brand expression before millions of fans. The new logo will not replace the historic American Legion emblem, but rather complement it by honoring the history, heritage and symbols which Legionnaires hold dear.

"Just like each one of our military branches, The American Legion will always have and utilize our traditional seal which has deep meaning to each and every Legionnaire," said Dean Kessel, chief marketing officer for The American Legion. "Our new marketing logo on the No. 48 Honda livery looks fantastic and provides a modern and contemporary expression for the brand. The American Legion name is clearly visible and honors our nation's veterans while still honoring who we are as an organization."

The American Legion is prominently featured on the No. 48 Honda during every race in the 2021 and 2022 NTT INDYCAR SERIES. It is the primary paint scheme for two races in 2021, including, "The Greatest Spectacle in Racing" -- the Indianapolis 500 on Memorial Day weekend – and at the Texas Motor Speedway May 2.

Throughout the year, The American Legion will use the series and national television exposure to bring attention to some of the most important issues facing today's veterans, including veteran suicide, honoring the fallen and remembering the service and sacrifice rendered as a result of 9/11 and other topics. For more information on The American Legion and its NTT INDYCAR SERIES participation, visit Legion.org/48.

About Chip Ganassi Racing Chip Ganassi has been a fixture in the auto racing industry for over 30 years and is considered one of the most successful as well as innovative owners the sport has anywhere in the world. Today his teams include four cars in the NTT INDYCAR SERIES, two cars in the NASCAR Cup Series, and one car in both the IMSA WeatherTech SportsCar Championship and Extreme E. Overall, his teams have 20 championships and over 225 victories, including four Indianapolis 500s, a Daytona 500, a Brickyard 400, eight Rolex 24 At Daytonas, the 12 Hours of Sebring and the 24 Hours of Le Mans. Ganassi boasts state-of-the-art race shop facilities in Indianapolis and Concord, N.C., with a corporate office in Pittsburgh. For more information log onto www.chipganassiracing.com

Veteran from Lake Kiowa, Texas, Elected National Commander of The ...