DALLAS, March 30, 2021 /PRNewswire/ -- Cosm, a global technology company that builds end-to-end solutions that power immersive experiences, announced today that its division, LiveLike VR, has been rebranded as Cosm Immersive. The new name reflects the company's ability to deliver live immersive experiences to fans across its partners' products, mediums and technologies; including VR headsets, mobile apps, and the web. 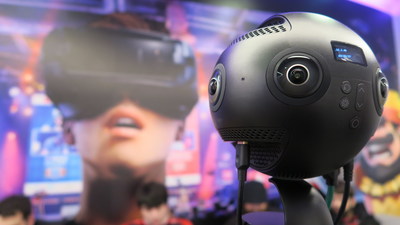 Cosm acquired LiveLike VR, the immersive arm of LiveLike, Inc. in 2020. LiveLike, Inc., will continue the development of its Audience Engagement Suite for mobile apps and web independently, under the leadership of Miheer Walavalkar.

"Under Fabrice and Jérémie's leadership, the team has pioneered VR production and immersive experiences over the last decade," said Devin Poolman, Cosm's Chief Product and Technology Officer. "We are excited to have them lead our new efforts to evolve the incredible VR and AR viewing experiences."

"What excited me most about becoming part of Cosm, is a renewed ability to innovate," said Lorenceau. "Our live production has four tenets: immersive, content rich, interactive and social; and Cosm allows us to push all four of these to places we have only imagined."

Additionally, the company's work within Oculus Venues brings together fans from around the world for live concerts and sporting events, collectively experienced in virtual reality. Cosm Immersive brings customizable and scalable broadcast-friendly workflows with MR and game-engine-powered graphics capabilities to make these productions turnkey.

"Cosm Immersive is a world leading partner for the capture, production and distribution of immersive viewing experiences," said Matt McCartney, Head of Immersive Technology at Sky. "They basically developed what is now the modern and broadcast friendly workflow."

"With this new chapter, we have the ability to create immersive experiences that have never been seen before thanks to new Cosm technologies," said Lasnier.

Cosm is currently showcasing live and immersive content in its new Salt Lake City-based Experience Center, which features its technology solutions housed in a 20-meter diameter immersive 8K LED dome, also known as DomeX, the only one of its kind in the world.  The experience is powered by the seventh iteration of Evans & Sutherland's core 3D rendering engine, Digistar, showing real-time rendered environments, live-streamed and recorded videos, and live content integrations with Unreal Engine and Unity. The Cosm technology platform combination of DomeX, Digistar, and live content capture and distribution takes immersive experiences to a whole new level across its three primary content verticals; now including the sports and entertainment market.

In addition to Cosm Immersive, Cosm is comprised of Evans & Sutherland (E&S), a leading software and display technology company, with a 70-year legacy of providing spatial computing and immersive rendering software, projection and LED screen technology, and full dome theater systems; and Spitz, Inc. (an E&S Subsidiary), known for the Spitz NanoSeam panel, and a pioneer in the planetarium and custom curved projection screen industry. The company provides design and structural engineering expertise, custom domes and spherical structure manufacturing, and additional curved and domed architectural designs. With over 2,000 experiences delivered and over 500 active installs, the combined companies are the market leader in the planetarium industry. In addition, the companies have also delivered signature experiences at prominent theme parks and attractions such as SeaWorld and other well-known parks; counting some of the world's most notable flying and dark rides as successful screen design and development projects.

For media assets and images:  https://cosm.com/press

About CosmCosm is a global technology company that redefines the way the world experiences content across three primary markets: Sports and Entertainment, Science and Education, and Parks and Attractions. Cosm Companies include Evans & Sutherland, Spitz, Inc., and Cosm Immersive with 150 employees worldwide.