ANAHEIM, California, Aug. 12, 2021 /PRNewswire/ -- With the aim of promoting the offering of technologies and capabilities of Costa Rican companies to an audience of professionals, executives and engineers from the global medical device sector; a Costa Rican delegation - composed of companies from the industry, the Promotora del Comercio Exterior (PROCOMER) [Foreign Trade Promoter] and the Coalición Costarricense de Iniciativas de Desarrollo (CINDE) [Costa Rican Coalition of Development Initiatives] - is participating in the sector's most important fair: Medical Design and Manufacturing (MD&M) West 2021. 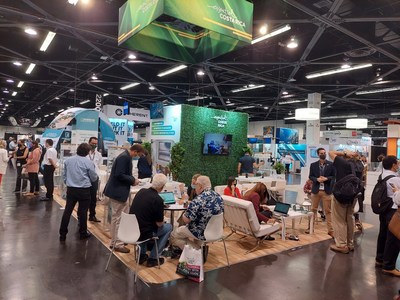 From 10 to 12 August, the Costa Rican delegation will promote its medical device industry's exports and the benefits of its country as a key destination for investment in this type of companies.

For Pedro Beirute Prada, General Manager of PROCOMER, Costa Rica's participation in this fair is strategic because it is the country's main export sector. "Precision and medical equipment makes up 35% of our country's total exports of goods. In addition, it experienced 46% growth in the first half of 2021 compared to the same period of the previous year. This makes it a priority sector because of its growth and capacity to generate employment, but also because of the linkages it generates with small and medium-sized local suppliers and the transfer of knowledge that are gradually energizing and strengthening the medical devices cluster we have in the country.  The success and resilience of this sector translates into well-being for the country, which is what we seek with PROCOMER's export promotion strategy," he said.

Jorge Sequeira, General Director of CINDE, commented "Participation in this fair is one of the international promotion efforts in which we position Costa Rica as an investment destination. The space allows us to transmit to potential investors the value proposition of people, planet and prosperity and to reflect the environment of technological convergence that the country offers to attract leading companies in Industry 4.0, and that are also looking for reliable options for new nearshoring, an area in which Costa Rica has been leading for several years".

According to CINDE data, Costa Rica is home to a robust ecosystem of companies in the life sciences sector, comprising more than 80 multinationals in technology and medical devices committed to the mission of saving lives around the world. Furthermore, Costa Rica is home to 13 of the top 20 original equipment manufacturers and 16 leaders in cutting-edge technology.

MD&M West is one of the most relevant expositions in the medical device sector and is expected to have the participation of at least 13,000 professionals from the main medical device manufacturing companies. This fair is the convergence point for the sector, providing Costa Rican companies the opportunity to be one step ahead in the latest technologies, contacts and solutions in contract manufacturing, automation, manufacturing equipment, research and development, medical device components, materials, plastics, among others.

More presence in the United States

As of June 2021, PROCOMER has a new commercial office in a California city, from where it is strengthening the promotion of Costa Rican exports on the West Coast of the United States. This office is under the supervision of PROCOMER's Trade Promotion Office (TPO) in New York, headed by Director Maykool López. (link LinkedIn).

This new Costa Rican office on U.S. soil is in charge of offering Costa Rican products and services to buyers on the West Coast, as well as promoting the country's brand Esencial Costa Rica, seeking alliances with business chambers, entrepreneurship and innovation centers, etc.

For more information about Costa Rica and its exportable offer, please write to [email protected].

Costa Rica increases its presence in the USA with a new trade...