The special pterodactyl exhibition "Emperors of the Skies" presents a pterosaur with a physique that is different from other previously-known species. Well-preserved remains show that this is the largest and most robust pterodactyl ever found. 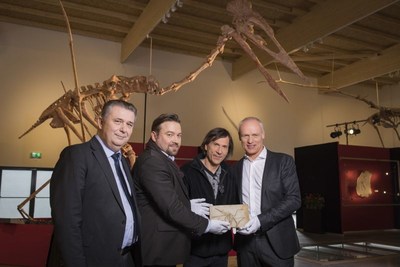 (Photo: https://mma.prnewswire.com/media/656713/Altmuehltal_Dinosaur_Museum.jpg ) The special pterosaur exhibition "Emperors of the Skies" presented by the Altmuehltal Dinosaur Museum features 24 important exhibits from the Altmuehl Jurassic along with a sensational find from Transylvania. Nicknamed "Dracula" because of its origin in Transylvania, this pterosaur has a physique that is different from other previously known species. Because of its excellently preserved remains, researchers conclude that it is the most powerful pterodactyl ever excavated. "The carpal bone alone was larger than that of a mammoth, and the neck was the width of a full-grown man," says paleontologist Mátyás Vremir, member of the Transylvanian Museum Society. He discovered the first bone on a steep slope near the Romanian town of Sebeș in 2009.

Scientists estimate Dracula's weight to be at least half a ton and its wingspan at more than 12 meters. "The pterodactyl may have had a wingspan of up to 20 meters, and standing upright, it was probably as tall as a giraffe," says Mark Norell, Curator, Division Chair and Professor Division of Paleontology at the American Museum of Natural History in New York. Norell was involved in the excavations in Romania.

"No large predators were found in the region around the site, which was probably a subtropical island landscape in the Cretaceous period. We assume that he was at the top of the food chain," explains Raimund Albersdörfer, an excavator and geologist who was involved and financed the work for many years. Like T. rex that ruled another continent at the same time, "Dracula" was a witness and victim of the mass extinction of dinosaurs.

"This sensation underscores the Dinosaur Museum Altmuehltal's claim to be one of the world's most important exhibition venues for prehistoric times," says museum founder Michael Völker. The "Emperors of the Skies" exhibition is open from March 23 to November 4, 2018.

Press materials along with cost/license-free TV footage are available from the following download link: https://flowcenter1.flowworks.de/flowrooms/screeningroom/XrsPzXMAmoDioHBuhNZs_layoutneutral/284/