DENVER, Sept. 27, 2019 /PRNewswire/ -- Fathom Events and BYUtv will present the long-awaited adaptation of the New York Times bestseller "Christmas Jars" in more than 800 theaters nationwide on Monday, Nov. 4 at 7 p.m. local time. Tickets for the inspiring movie can be purchased at www.FathomEvents.com and participating theater box offices. 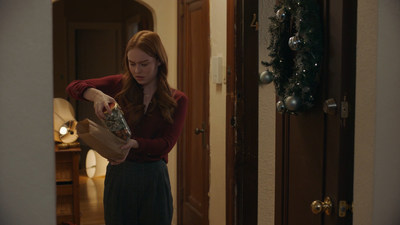 "'Christmas Jars' is a special kind of film that will draw audiences into the lives of its characters in a deeply moving way," said Michael Dunn, managing director of BYUtv. "It is an emotional, entertaining ride that we knew needed to be shared as widely as possible. Partnering with Fathom Events allows us to take this story to communities across the country and help families everywhere launch their holiday celebrations in a meaningful way."

Based on the beloved novel by Jason F. Wright, "Christmas Jars" tells the story of reporter Hope Jensen, who uncovers the remarkable secret behind the glass jars filled with coins and bills anonymously left for people in need. "Christmas Jars" is a phenomenon with a reach far beyond that of typical fiction, as it created a new tradition that has changed the lives of many people in their time of need all over the country.

"It's tough to articulate what it means to see 'Christmas Jars' finally coming to life," said Wright. "I'm so thrilled with what the team has done and that I don't have to pretend to like the adaptation of my novel. I'm absolutely in love with it. Even more than buying a ticket and eating some popcorn, I want folks to go home and join the 'Christmas Jars' movement by putting a jar on their counter, filling it up and giving it away anonymously to someone in need during the holidays."

"Christmas Jars" will be presented on select theater screens across the U.S. through Fathom's Digital Broadcast Network (DBN). For a complete list of theater locations, visit the Fathom Events website (theaters and participants are subject to change).

About BYUtvBYUtv provides families more than 1,700 hours of entertaining and compelling programming they can enjoy together. The network's content is trusted, contemporary and clean, yet clever and sophisticated enough to inspire children and parents alike. BYUtv's diverse portfolio of original, co-produced and acquired content includes scripted and unscripted dramas and comedies, 700+ hours of live HD collegiate sports, game shows, and holiday special made-for-tv movies, docudramas and concerts. BYUtv is available in 50 million homes in every state of the country on DISH Network, DirecTV and 146 other major cable systems. A digital pioneer, BYUtv was the first U.S. television network to stream all of its content live and unencrypted over the internet. Today, BYUtv has over 1 million YouTube subscribers and 1 billion views and is available live and on-demand on multiple digital platforms free of charge, including Apple TV, YouTube, Roku, Amazon Fire, Chromecast, Xbox One, Windows Media, digital apps for iOS and Android, and BYUtv.org. Based in Provo, Utah, BYUtv is part of BYU Broadcasting, which is owned by Brigham Young University.

BYUtv Greenlights Season 2 of "Ruby and the Well" Ahead of Series ...