RICE LAKE, Wis., June 8, 2021 /PRNewswire/ -- American firearms manufacturer Henry Repeating Arms is donating a series of 50 custom Golden Boy lever action rifles to raise funds for the family of 8-year-old Kalel Hamilton who is battling Duchenne muscular dystrophy (DMD), a rare and terminal genetic disease with no known cure. All of the proceeds raised from the "Flex For Kalel" edition rifles will benefit the non-profit organization Cure Rare Disease on the Hamilton family's behalf so that Kalel becomes eligible for a custom gene therapy treatment. 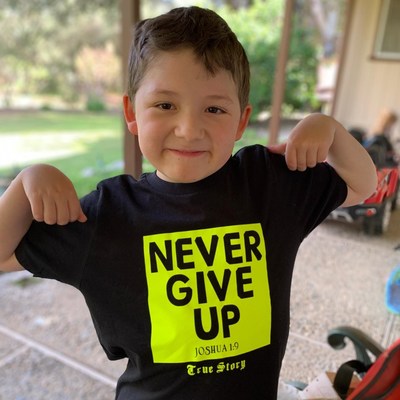 Last year, Henry Repeating Arms raised more than $175,000 for the families of four sick children, and the "Flex For Kalel" campaign will raise over $25,000 to secure Kalel's spot in line for the experimental treatment that could potentially save his life and others diagnosed with DMD.

Rick Hamilton, Kalel's father and U.S. military veteran says, "We are thankful for generous individuals and businesses such as Henry Repeating Arms." Hamilton continues, "Without them we would not have the ability to help advance science, save our son, and hopefully save others like him."

The "Flex For Kalel" edition rifles feature a superhero motif as a symbol of Kalel's endurance and a nod to his name, which is inspired by Kal-El, the birth name of Clark Kent, AKA Superman. Built on Henry's award-winning Golden Boy platform, the rifles are chambered in .22 S/L/LR and feature a Brasslite receiver cover, blued steel octagon barrel, and genuine American walnut furniture with laser engraving and hand painted accents that include a green muscular dystrophy awareness ribbon. The embellishment work for every rifle is a donation from Baron Engraving of Trumbull, Connecticut. Each rifle in the series is marked with a unique serial number ranging from "FLEXFORKAL01" through "FLEXFORKAL50."

Anthony Imperato, President and Owner of Henry Repeating Arms says, "For the first time in Guns For Great Causes history, we have the opportunity to assist a family with getting a potentially breakthrough treatment for a disease with no known cure." Imperato continues, "This could make a huge impact not just for Kalel and his family but thousands of others in a similar situation, and I will be cheering him on along with the rest of the Henry family."

About Henry Repeating Arms: Henry Repeating Arms is one of the leading rifle and shotgun manufacturers in the United States and a world leader in the lever action category. The company motto is "Made in America, Or Not Made At All," and its firearms come with a lifetime guarantee backed by award-winning customer service. The company is also known for its charitable endeavors under its Guns For Great Causes program, which focuses on sick children, both individual cases and children's hospitals, veteran organizations, and Second Amendment and wildlife conservation organizations. The company currently employs over 500 people and has 250,000 square-feet of manufacturing space between its headquarters in Rice Lake, Wisconsin and second facility in Bayonne, New Jersey. The company is named in honor of Benjamin Tyler Henry, who invented and patented the first successful lever action rifle in 1860, which is America's unique contribution to international firearms design and is one of the most legendary, respected and sought-after rifles in the history of firearms. Visit Henry Repeating Arms online at www.HenryUSA.com, on Facebook at www.facebook.com/henryrepeating, and Instagram @Henry_Rifles.