NASHVILLE, Tenn., Sept. 13, 2019 /PRNewswire/ -- After an impactful re-launch at Winter and Summer NAMM, artists, players and fans are continuing to experience Gibson, the iconic American instrument brand, rejuvenated. Gibson announced today it will return to Japan and China for the re-launch of the leading guitar brand's new vision and new products throughout Asia. Gibson will showcase an array of new guitars, top talent and a handful of rare guitars at Music China 2019--Asia's largest trade show in the music industry--October 10-13 at the Shanghai International Expo Centre. 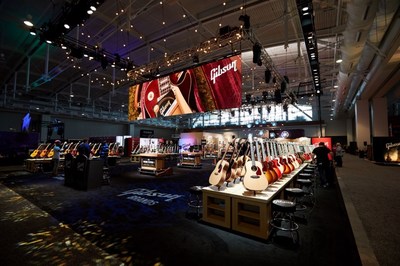 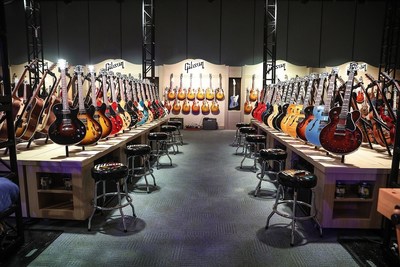 Gibson's new CEO and President James "JC" Curleigh will be on hand in Japan and China to meet with dealers, artists and partners at the Gibson Showroom in Tokyo, Japan (Oct 7-8) and at the Gibson booth #W4F20 at Music China 2019 in Shanghai (Oct 10-13). Music China--gathers more than 2,200 international exhibitors from over 30 countries and regions throughout Asia. At Music China 2019, Gibson will be on the ground to connect with Dealers, Strategic partners and Distributors, to forge new relationships and explore new opportunities for growth in retail, branding, management, as well as secure support for authorized dealers and local artists throughout the region. JC's visit marks the first time in a decade a top executive at Gibson has visited Music China in Shanghai.

"We recognize that there is an opportunity to bring our renewed Gibson momentum to the Asian market to drive future growth," says JC, President and CEO of Gibson. "I look forward to connecting with our Dealers, Partners and Fans including current and future Asian artists."

The Gibson booth and experience at Music China will feature exciting, award-winning new products from the brand including the new G-45 Series Collection--the G-45 Standard and G-45 Studio guitars. Hand-crafted by skilled artisans at the Gibson acoustic facility in Bozeman, Montana--who build the most cherished and iconic acoustic models--the G-Series offers acoustic players of all levels the perfect mix of tone and performance with traditional Gibson style and value.

The newly released Gibson Original, Modern and Custom Shop Collections as well as the recently launched String Collections will be on display in full at Music China. Featuring the Les Paul Standard 50's, Les Paul Standard 60's, Les Paul Special in TV Yellow, Les Paul Junior in Tobacco Burst, the SG 61 Standard with factory stop-tail, Maestro and Sideways vibrolas, SG Special and Junior, the classic ES-335 Figured and DOT, Firebird, Flying V and Explorer, the J-45 and Hummingbird as well as the J-200, the Gibson Original Collection brings classic design, innovation and authenticity back into the hands of Gibson fans.

The Gibson Modern Collection builds on Gibson's solid legacy of coveted innovation by introducing modern features players have embraced, such as lighter-weight bodies, push-pull systems to switch between the Burst Bucker and P90 sounds, innovative slim-taper necks with asymmetrical profiles, shaved heels for effortless access to the highest frets as well as maximum sustain and stability. The Les Paul and SG Modern, Les Paul Studio and Tribute models, the new ES-235 and modern versions of the ES-335, Flying V and Explorer B-2, and modern Hummingbird, J-45 and J-15 as well as the Parlor acoustic models round out the Gibson Modern Collection.

As the pinnacle of craftsmanship, quality and sound excellence, Gibson Custom Shop celebrates Gibson's legacy through accuracy, authenticity and attention to detail. This year, we celebrate the 60th anniversary of the 1959 Les Paul Standard--the holy grail--this release marks our most historically accurate recreation of the most iconic guitar in history.

About Gibson: Gibson Brands, the world's most iconic guitar brand, has shaped the sounds of generations of musicians and music lovers across genres for more than 100 years. Founded in 1894 and headquartered in Nashville, TN, Gibson Brands has a legacy of world-class craftsmanship, legendary music partnerships and progressive product evolution that is unrivaled among musical instrument companies. The Gibson Brands portfolio includes Gibson, the number one guitar brand, as well as many of the most beloved and recognizable music brands, including Epiphone, Kramer, Steinberger and Gibson Pro Audio division brands Cerwin Vega, KRK Systems and Stanton. Gibson Brands is dedicated to quality, innovation and sound excellence so that music lovers for generations to come will continue to experience music shaped by Gibson Brands. Learn more at http://www.gibson.com and follow us on Twitter, Facebook and Instagram.

For press enquiries, interviews and reviews regarding Gibson, contact:

Gibson Wins Historic And Definitive Ruling On Its Iconic Guitar...