SCOTTSDALE, Ariz., Dec. 12, 2019 /PRNewswire/ -- GoDaddy Inc. (NYSE: GDDY), the company that empowers everyday entrepreneurs, today published its annual diversity and salary parity data. The data shows that GoDaddy pays men and women in similar jobs at parity across the company, marking the fifth consecutive year the company has achieved this goal. The data also illustrates that GoDaddy continues to make progress to reduce bias, yet there is work to do to increase the overall population of females and ethnic minorities across the company. 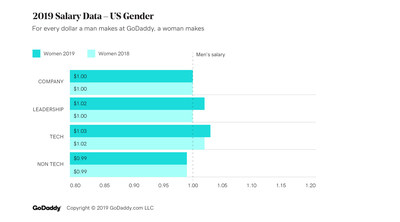 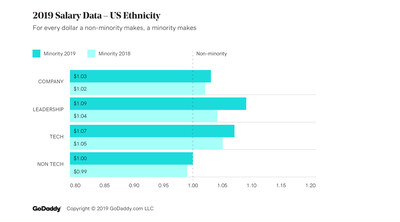 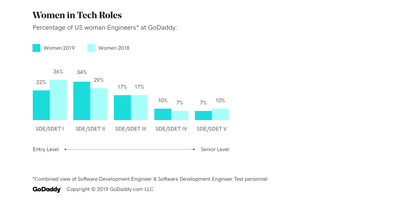 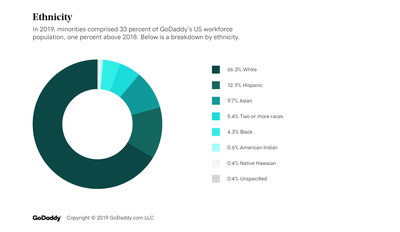 "GoDaddy is proud of the progress we've made in creating a more inclusive and diverse workplace, and of the rigorous programs we've put in place to ensure employees are paid and treated fairly," said Chief People Officer Monica Bailey. "The numbers also show that our efforts to minimize unconscious bias across the organization, specifically in the areas of performance reviews and career advancement, continue to generate positive results. GoDaddy remains steadfast in our commitment to create a workforce that is as diverse as the customers we serve and we believe we're on the right path."

GoDaddy Salary DataThe 2019 global salary data shows that GoDaddy is paying men and women at parity across the company, when comparing men and women in like roles. GoDaddy analyzes total rewards including base salary, target bonus and stock grants to capture a complete view of pay.

The 2019 US salary data shows that, in the technical ranks, women make three cents more on the dollar than men, and women in non-technical roles make one cent less than their male counterparts. Women in leadership roles make two cents more.

Women comprise 32 percent of global leadership positions at GoDaddy, defined as Director and above level roles and their individual contributor equivalent. In the US, women comprise 33 percent of leaderships positions, which is flat versus 2018 and up from 31 percent in 2017. Additionally, women account for 39 percent of GoDaddy's top leadership team, a three percent increase from 2018. These positive gains result from a system introduced in 2016 that proactively identifies qualified women, and other qualified candidates, who should be considered for promotion so that no one is overlooked during reviews.

In 2019, minorities comprised 33 percent of GoDaddy's US workforce population, one percent above 2018. Below is a breakdown by ethnicity.

Below is a closer look at GoDaddy's minority population in the US across different company roles and departments.

GoDaddy is empowering everyday entrepreneurs around the world by providing all of the help and tools to succeed online. With 19 million customers worldwide, GoDaddy is the place people come to name their idea, build a professional website, attract customers and manage their work. Our mission is to give our customers the tools, insights and the people to transform their ideas and personal initiative into success. To learn more about the company visit www.GoDaddy.com.

GoDaddy Inc. To Present At The Morgan Stanley Technology, Media...