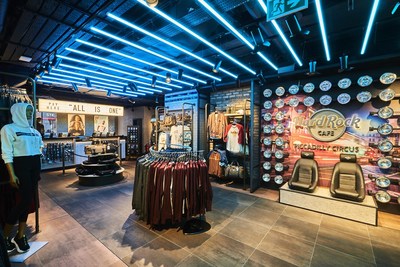 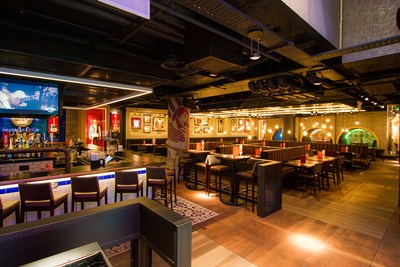 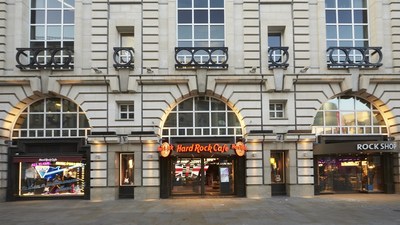 "We are thrilled to open the doors of our new flagship location in Piccadilly Circus. As our first Cafe opened in London in 1971, the brand has a deep history in this city. Through this new location we're staying true to our roots, while providing a modern vision to our classic style," said Stephen K. Judge, President of Cafe Operations for Hard Rock International. "The Piccadilly Circus Cafe brings brand innovation to the forefront with the modern design of the Cafe and our new menu that offers guests a world-class dining experience."

The more than 19,000-square-foot, multi-level, state-of-the-art Cafe features Hard Rock's one-of-a-kind blend of music, entertainment, iconic merchandise and authentic American food and drink. This location showcases an open kitchen concept with the brand's "Love All – Serve All" mantra prominently displayed above it, as well as Hard Rock's new brand style that draws on inspiration from the city. For epic group entertainment experiences, a stage is centered in the main dining room and a private events room is available for up to 40 guests.

Guests will be drawn to the liveliness of the Cafe before stepping foot inside thanks to state-of-the-art flexible LED video panels cascading over the stairway that take fans through a journey showcasing today's music and culture from London and around the UK. The Piccadilly Circus Cafe brings a new culinary experience to guests through a selection of innovative new menu options, as well as an open kitchen layout that features a stone pizza oven and a milkshake station where guests can look on as their milkshakes are individually crafted. The Cafe also honors London's famous transportation system with Tube Station dining booths, seating and décor that utilize specific colors of the subway tiles from stations throughout London.

Expanding on the fusion of classic and modern, Hard Rock Cafe Piccadilly Circus boasts a star-studded memorabilia collection with items from iconic British artists such as Elton John, John Lennon and David Bowie, as well as contemporary artists like Ed Sheeran, Rita Ora, Lorde and Ellie Goulding. Nearly 70 percent of the memorabilia items on exhibit at Hard Rock Cafe Piccadilly Circus have never been on display at any Hard Rock location worldwide, with items ranging from Ed Sheeran's outfit from his 2014 hit music video for "Thinking Out Loud" to a pair of John Lennon's legendary round glasses and more!

At Hard Rock Cafe Piccadilly Circus, guests will discover the latest Hard Rock merchandise collections that will be displayed throughout the largest Rock Shop in the world. The Rock Shop, which is inspired by the iconic Union Jack flag, includes items from merchandise collections such as the Classics Collection, a true traveler's trophy to new products, the Guitar Company Collection, which takes cues from an evolution of non-conforming musical legends to deliver designs customized exclusively for Hard Rock, as well as the Heritage Collection, which is inspired by Hard Rock's founding year of 1971. For the brand's loyal pin collectors, the Piccadilly Circus Cafe will offer three limited-edition grand opening pins, along with the latest pin puzzle celebrating the three locations in London.

"Expanding our brand within the city where it all began is an exciting opportunity for Hard Rock as we debut our modern vision for the future," said David Pellow, Senior Vice President of Cafe Operations for Hard Rock International. "We have a deep commitment and love for London, and being from the UK, I am grateful that the brand continues to show its commitment to the community and visitors from around the world."

Hard Rock International Honored By Forbes Magazine As One Of...