WASHINGTON, Nov. 8, 2019 /PRNewswire/ -- Through continued investment in safety and the customer experience, Amtrak delivered its best operating performance in company history this past fiscal year. The company set new records for ridership, revenue, and financial performance on its path to achieve operational breakeven in fiscal year 2020. Preliminary results for fiscal year 2019 (Oct. 2018-Sept. 2019) include: 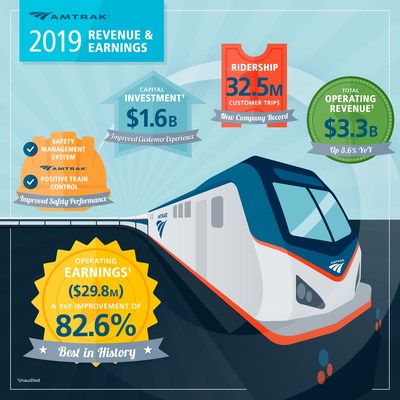 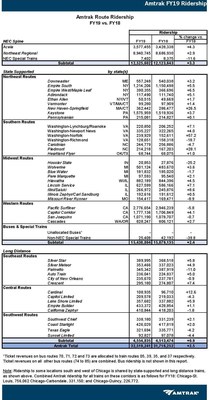 In fiscal year 2019, Amtrak was the first major U.S.-based railroad to implement a Safety Management System, a proactive approach to managing safety, resulting in significant improvements, including: a 26% reduction in customer incidents; 72% fewer serious employee injuries; a 10% reduction in Federal Railroad Administration reportable injuries; and a 3% reduction in trespasser and grade crossing incidents. Additionally, PTC installation was completed on nearly all Amtrak-owned and controlled track.

Another driver of this year's success was the superior customer service delivered by Amtrak employees and a record $1.6 billion investment on capital assets. This includes: refreshed equipment, including the entire Acela fleet and Amfleet II cars for Coach class along the East Coast; technology upgrades like updating the Amtrak mobile app and offering assigned seating;  state-of-good-repair work on the Northeast Corridor (NEC) improved overall reliability and performance; station upgrades and enhanced lounges; and other customer-friendly benefits that support the long-term growth of intercity passenger rail.

Additionally, Amtrak is undertaking the largest fleet renewal in history. Manufacturing continues on the new Acela fleet, a contract was awarded for 75 new locomotives to replace some of our aging National Network locomotive fleet, and a Request for Proposals (RFP) was issued for a new fleet of single-level passenger rail vehicles.

Amtrak customers noticed the improvements, with nearly 9 out of 10 customers surveyed expressing overall satisfaction with their experience. Amtrak achieved a year-over-year increase in customer satisfaction scores in many categories, including clean train interiors, restroom cleanliness, and information about delays. Acela and Northeast Regional customers noticed improvements and were increasingly likely to recommend Amtrak to family, friends, and colleagues.

Initial terminal performance was strong with 93% of trains across the system departing on time. The strongest performance was on the NEC, where trains departed on time from Washington, DC, more than 97% of the time.

NEC and State Supported lines all experienced record growth in ridership, with Acela leading the charge at 4.3%, Northeast Regional at 2.9% and State-Supported services at 2.4%. Long Distance ridership was up nearly 1%.

This year, Amtrak received a credit upgrade to 'A' from S&P and an affirmation of an 'A1' credit rating by Moody's, reflecting significantly reduced operating losses and a stronger balance sheet, with no net debt. Fiscal year 2019 is also the first full year in which all congressionally-mandated state and commuter partner cost-sharing agreements have been in effect.

"We are growing and modernizing Amtrak. We have an industry-leading safety program and have invested billions in improving the customer experience, resulting in more people choosing Amtrak as their preferred mode of transportation," said Amtrak Board Chair Tony Coscia. "These changes have put us on track to breakeven in 2020, which would be a first in Amtrak's history."

"We listened, we invested, we improved, and our customers are noticing a difference," said Amtrak President & CEO Richard Anderson. "And we are not stopping. We have an aggressive plan to continue to advance our safety program, refresh train interiors, improve amenities, and renew stations and infrastructure."

Amtrak highlights in fiscal year 2019 include:

Amtrak Offers Buy One Get One Free with the Amtrak Loves You Sale...