SAN FRANCISCO, Aug. 7, 2018 /PRNewswire/ -- Invitae Corporation (NYSE: NVTA), one of the fastest growing genetics companies, today announced financial and operating results for the second quarter ended June 30, 2018. Based on progress in the quarter, Invitae is raising its revenue guidance from more than $130 million to between $135 and $140 million in 2018. 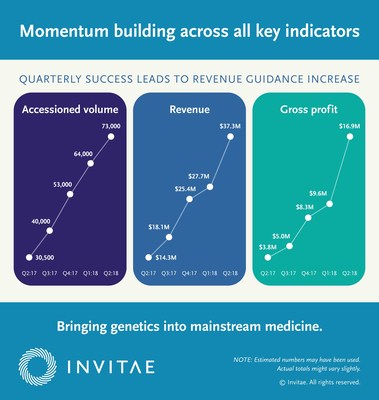 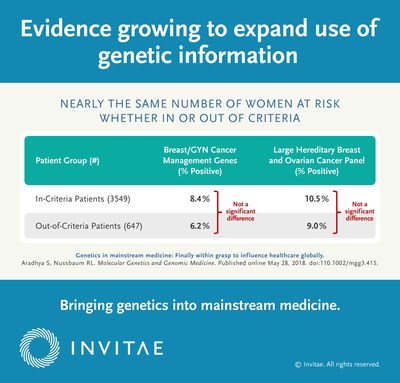 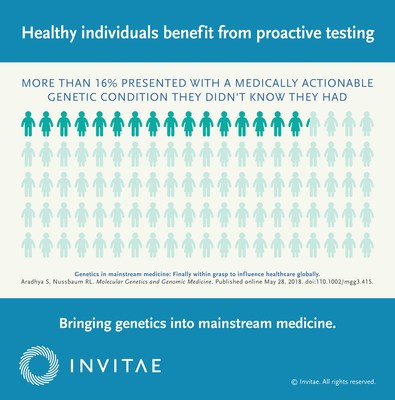 "The combination of our broad and affordable diagnostic, reproductive health and proactive testing capabilities enables Invitae to answer genetic-related healthcare questions across all stages of life and opens up opportunity for growth as we bring genetics into mainstream medicine," said Sean George, co-founder and chief executive officer of Invitae. "Amidst the rapid growth in both volume and revenue, Invitae is emerging as a leader in the world of genetics. Given our progress, we're increasing our annual revenue guidance."

Cash used in operating activities for the quarter was $26.5 million, compared to $35.1 million in the first quarter of 2018. At June 30, 2018, cash, cash equivalents, restricted cash and marketable securities totaled $91.4 million which includes $53.5 million in net proceeds from an equity offering that closed in April. The company also has access to $20 million in additional debt, bringing total available capital at the quarter close to more than $110 million.

Management will host a conference call and webcast today at 4:30 p.m. Eastern / 1:30 p.m. Pacific to discuss financial results and recent developments. The dial-in numbers for the conference call are (866) 393-4306 for domestic callers and (734) 385-2616 for international callers, and the reservation number for both is 3497996. Following prepared remarks, management will respond to questions from investors and analysts, subject to time limitations.

Invitae Corporation (NYSE: NVTA) is a genetics company whose mission is to bring comprehensive genetic information into mainstream medical practice to improve the quality of healthcare for billions of people. Invitae's goal is to aggregate most of the world's genetic tests into a single service with higher quality, faster turnaround time and lower prices.

Invitae Reports $46.2 Million in Revenue Driven by More Than...