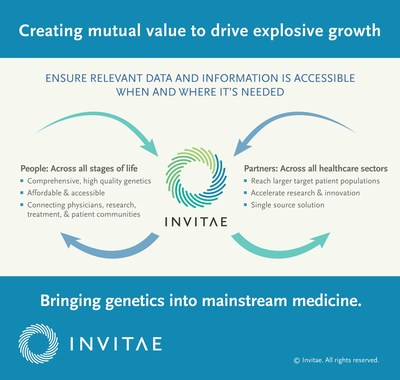 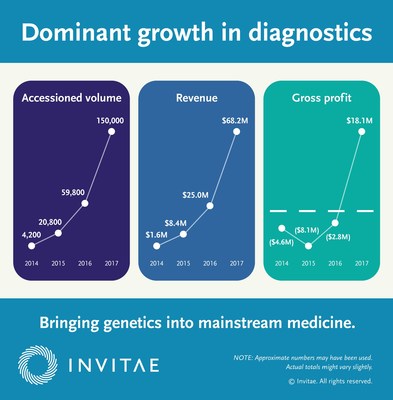 "Over the past year, we have made significant strategic investments that we believe uniquely position our company to deliver affordable, high-quality, comprehensive genetic information and empower individuals to do more with that information," commented Sean George, chief executive officer of Invitae. "Our continued triple-digit volume and revenue growth demonstrates the power of our approach. Our cost structure, scalability and reputation has made us the fastest-growing genetic information company in hereditary cancer, and we are now leveraging that strength across all stages of life to become the partner of choice for individuals, health systems, biopharma partners and advocacy communities bringing genetic information into mainstream medical practice."

On November 14, 2017, Invitae completed its previously announced acquisition of CombiMatrix. Invitae's consolidated operating results below for the three and 12 months ended December 31, 2017, include the results of CombiMatrix beginning on the acquisition date. References to "base Invitae business" operating results and business measurements refer to Invitae fourth quarter and full-year 2017 results excluding any contribution from Good Start Genetics, acquired in August 2017, or CombiMatrix.

For 2018, the company announced it anticipates accessioning at least 250,000 samples and generating at least $120 million in revenue for the combined organization.

Management will host a conference call and webcast today at 4:30 p.m. Eastern / 1:30 p.m. Pacific to discuss financial results and recent developments. The dial-in numbers for the conference call are (866) 393-4306 for domestic callers and (734) 385-2616 for international callers, and the reservation number for both is 1395729. Following prepared remarks, management will respond to questions from investors and analysts, subject to time limitations.

Invitae Corporation (NYSE: NVTA) is bringing comprehensive genetic information into mainstream medical practice to improve the quality of healthcare for billions of people. As one of the fastest growing genetic information company, Invitae is advancing the broad potential of genetics, helping to expand its use across the healthcare continuum. The company provides genetic information services for all stages of life – from preconception screening, to newborn diagnosis, to inherited disease screening, to proactive health management – and a unique, rapidly expanding network of patients, hospital systems, and advocacy partners that is moving genetics from one-dimensional testing to complex information management. For more information visit www.invitae.com, or follow us on Twitter, Facebook or LinkedIn.