Two Of The World's Leading Music Artists Drop A Landmark Summer Album, Making Waves With The Sound Of Their Shared Caribbean Culture. A Video For First Single "Qué Pretendes" Has Also Just Been Released

"Do you know what an Oasis is? – Those beautiful places that stand out in the middle of dryness… You see it, and go: 'That's special…That's different' …And, the way you write it is the same in English & Spanish" - J Balvin recently on "Beats 1"

"[J Balvin & Bad Bunny] have been curiously quiet about the record… but Song of the Summer contenders be warned: …you'll hear from the two in 2019." - Rolling Stone 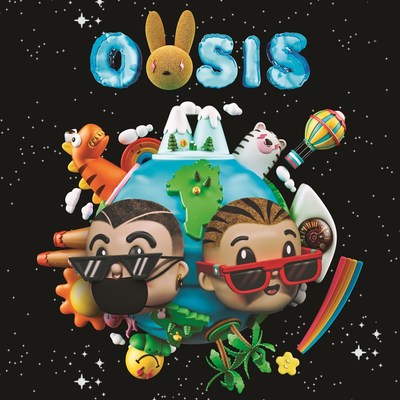 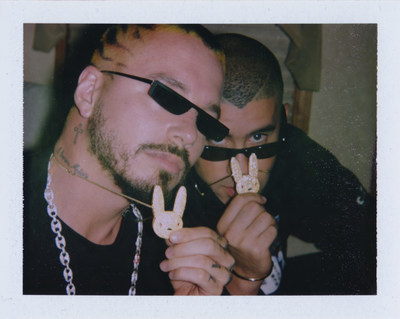 As their distinctive Latin Urban sound has surged to a still-growing worldwide embrace, a unique factor has been the strong support and continued creative collaborations, as opposed to musical rivalry, that have developed among some of the genre's leading artists.  This is especially apparent in the bond of near brotherhood that has formed between these two artists from opposite Caribbean shorelines.  Between Colombia's 'Global Ambassador of  Reggaeton' and Puerto Rico's 'Leader of the Latin Trap explosion,' J Balvin and Bad Bunny have been at the forefront of propelling Latin music to unprecedented success. Now, close friends Jose and Benito have joined forces to 'make waves with a fresh Caribbean flow' on a landmark album taking fans to a summer music Oasis.

"Oasis is a transcendental and refreshing album; it is a rescue, a relief. An Oasis helps you to supply yourself with what you're missing and to find what you lack spiritually; this is what this album represents. We have been working on it for a long time, and finally, we found its moment. Working with J Balvin has undoubtedly been an unparalleled experience, I have always admired and respected him a lot and we have had an excellent vibe throughout this whole process." – Bad Bunny

"I am proud to say I LOVE Bad Bunny; we always seem to be on the same wavelength, as he likes what I like. He is also all about celebrating our culture, while remaining super humble. Working with Benito again has been a musical joy.  I am blessed to not only call him my brother, but now a partner on an album that has even become a personal Oasis. I've been traveling all over the world the last few months, and anytime it started to feel overwhelming, I've been able to listen to the tracks we created, and instantly return 'Home'  to our own musical paradise.  I'm so glad the time has arrived where fans can now share those same new vibes with us." – J Balvin

About J Balvin Declared as "Reggaeton's Global Ambassador" by the New York Times, J Balvin is now one of the top streaming music artists in the world (currently #2 YouTube, #2 Spotify), regardless of language, and has developed a legion of fans represented by over 60 Million social media followers. Likewise hailed by Billboard as "the biggest breakout act Latin music has seen in many years" and Pitchfork as "the face of modern Reggaeton," J Balvin is leading a second generation of Musica Urbano stars that have propelled Latin music to an unprecedented global embrace.  Simultaneously, Balvin has become Latin music's strongest cultural envoy to both the fashion and pop art communities, while becoming one of the music industry's most in-demand collaborators, and worldwide major festival performers.

J Balvin's most recent album VIBRAS debuted at #1, gave birth to Latin music's most-praised tour of 2018, and was hailed by TIME. Rolling Stone, Billboard and many more as: "One of the Best Albums of 2018" ­- while also propelling the Colombian star to frequent #1 global rankings on both YouTube & Spotify's charts. This year has already seen J Balvin perform in the opening segment of The GRAMMY Awards, named the Premios Lo Nuestro "Artist of the Year" for an unprecedented third consecutive year, notch his 13th #1 Billboard single for his genre anthem "Reggaeton", and become the first male Latin music artist to launch his own fashion line with GUESS' "VIBRAS" collection.   As Latin music's leading representative on this year's global festival schedule, J Balvin has already been named the first-ever Latin music artist set to headline Lollapalooza, and just delivered the first-ever Reggaeton set on the mainstage at Coachella. That game-changing pop art production was praised by Variety as: 'one of the most eye-popping and elaborate sets ever to be immortalized on festival's stage… a monumental achievement — one of the greatest Coachella has ever seen."  This same unique production will also drive J Balvin's highly anticipated Arcoiris Fall tour of The United States.

About Bad BunnyBad Bunny, originally from Puerto Rico, is most recognized for his explosive and infectious trap songs. Rolling Stone magazine has named him "The Four-Billion-Stream Man leading the Latin Trap Explosion." This talented artist has demonstrated his already overwhelming power, influence and demand with completely sold-out concerts on both of his headlining tours, "La Nueva Religión Tour" (The New Religion Tour) and the "X 100PRE Tour", all over Europe, Latin America and the U.S. His unmistakable voice and rhythm have led him to transition to the general market, where he's already created waves of revolution with his participation in "I Like It" alongside Cardi B and J Balvin, which reached #1 on Billboard's Hot 100 chart. As well as his hit collaboration with Drake, "Mia", part of his debut album "X 100PRE" which has maintained itself at the top of the Billboard charts "Top Latin Albums" and "Latin Rhythm Albums" for 21 consecutive weeks. He has won several awards and has been nominated to the iHeart Radio Music Award, MTV VMA's, Latin AMAs, Latin GRAMMYs, and E! People Choice Awards. Furthermore, Bad Bunny celebrated being the face of the cover of FADER magazine where the artist boasts a feature story that perfectly recaps his story and properly introduces him to the American market as the Latin trap superstar he has become. He also added yet another major accomplishment to his book of accolades by appearing on the cover of COMPLEX magazine, along with J Balvin. This is a historic moment, as it is the first time in the magazine's history that Latin Urban artists are featured in the cover, showing the extent of Bad Bunny's reach across the globe, breaking cultural boundaries and language barriers and seamlessly transcending into the American market as a full-fledged urban artist of his own right. Consequently, the doors to the general market media had been open for him, leading him to be on the cover of other prominent magazines such as, Interview Magazine, Paper Magazine, Galore Magazine, and GQ Magazine. Currently, Bad Bunny has billions of views on YouTube and an overwhelming number of visits on other digital platforms such as Apple Music and Spotify, which pens him as one of the top Latin urban artists of the moment and one of the pioneers of the Latin Trap movement.