QINGDAO, China, Dec. 9, 2020 /PRNewswire/ -- The governments of Qingdao, Yantai, Weifang, Weihai and Rizhao jointly held the Jiaodong Economic Circle Integration Promotion Conference in Beijing on December 8. The event, themed "Tapping into New Development Pattern and Fostering New Growth Poles," gathered officials from related national ministries and commissions as well as executives of renowned Chinese think tanks and domestic and international enterprises. It provided a new platform for resource matching and sharing of the dividend from the integrated development of the Jiaodong Economic Circle. 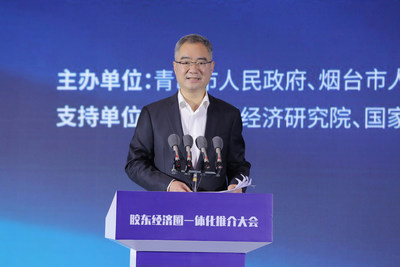 Wang Shujian said the CPC Shandong Committee and the provincial government attach great importance to integrated regional development, and have made it one of eight development strategies for the development of the Shandong Peninsula city cluster, the national central cities of Jinan and Qingdao and the provincial capital, Jiaodong and south Shandong economic circles. He said Jiaodong Economic Circle is at the forefront for opening-up to Japan and the Republic of Korea, boasting the highest-level opening-up, the most robust economy and the greatest development potential in Shandong province.

Wang Qingxian said Jiaodong Economic Circle is of great strategic importance in linking the southern and northern parts of China, and has significant influence on the development of the eastern and western parts of the country. He added the economic circle also serves as a key node to connect Japan and the ROK to the east and the New Eurasian Land Bridge (part of China's Belt and Road Initiative) to the west. He believed that the economic circle has unique value in the implementation of the country's "dual circulation" development strategy in which domestic and foreign markets can boost each other and "domestic circulation" is the mainstay, and it has the foundation and responsibility to take the lead in carrying out the development strategy for ecological protection and high-level development of the Yellow River basin and serve as a window for the opening-up of the basin. He hoped that more and more partners could join the economic circle to jointly foster new growth poles for China's economy under the new development pattern.

At the event, the financial departments of the five cities mentioned above and Shandong Hi-Speed Group established a RMB100 billion fund for investment in infrastructure in the Shandong Peninsula city cluster.