NEW YORK, March 3, 2020 /PRNewswire/ -- KIND Healthy Snacks (KIND) today launched KIND EQUALITY, a multi-faceted program to support the Equal Rights Amendment (ERA), a monumental constitutional amendment that would guarantee equal legal rights for all American citizens regardless of sex. To rally support, KIND today unveiled the EQUALITY Bot, a service for Americans to text their support for the ERA's adoption to state senators in two minutes or less, alongside the introduction of a limited-edition KIND® EQUALITY bar that celebrates and supports gender equality. 100% of the proceeds of the KIND EQUALITY bar will be donated to the Alice Paul Institute (API), a non-profit organization dedicated to advancing gender equality, with a minimum donation of $10,000, assisting in its efforts to educate the public about the ERA and provide leadership development for adolescent girls. 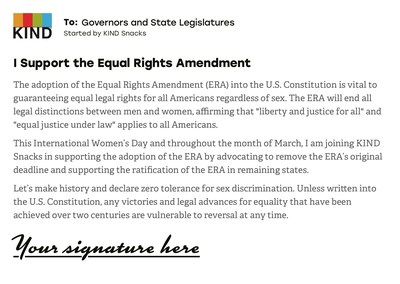 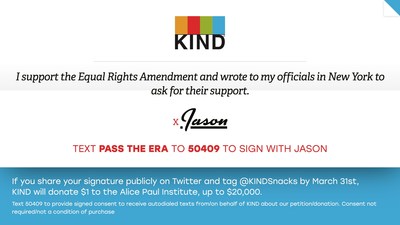 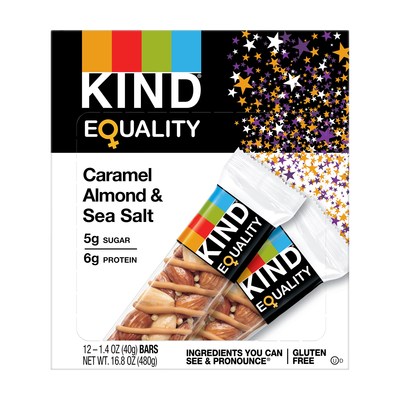 "It has been nearly 100 years since the ERA was first introduced to Congress for gender equality to become a constitutional right," says Elle Lanning, Chief of Staff at KIND. "KIND has always used our voice to elevate kindness and empathy. In this case, our team, which is comprised mostly of women, is proud to support the ratification and adoption of the ERA. Through this program, our hope is to help solidify gender equality as a basic human right in this country, once and for all."

Public polls consistently show that eighty percent of Americans mistakenly believe that men and women are guaranteed equal rights by the U.S. Constitution, yet the U.S. Constitution is one of just 28 worldwide that doesn't guarantee gender equality2. The ERA is critical to preserving and enforcing equality and without the amendment, current laws protecting gender equality and social advancement can be amended or repealed at any time.

"We have learned from Alice Paul, the original ERA author and one of America's greatest champions for civil rights, that in order to push the ERA into the U.S. Constitution, we need to rally as much support as possible," says Lucienne Beard, Executive Director of the Alice Paul Institute. "By partnering with KIND and its EQUALITY Bot service, we are making it as easy as possible for Americans to share their support for the ERA and make history by finally achieving legal gender equality in this country."

The new EQUALITY Bot, created in partnership with Resistbot, is a service that takes the traditionally complicated and time-consuming act of contacting elected state officials and transforms it by providing a convenient text message service for people's voices to be heard. Through the month of March, Americans can simply text "Pass the ERA" to 50409 to sign KIND's collective petition that will be sent directly to participants' state officials to increase the likelihood that this amendment will enter the U.S. Constitution. The EQUALITY Bot will also hit the road and be available via freestanding kiosks at college campuses across the country. If you share your signature publicly on Twitter and tag @KINDSnacks by March 31st, KIND will donate $1 to the Alice Paul Institute, up to $20,000. To learn more about how to sign KIND's petition, please visit @KINDSnacks on Instagram, Twitter and Facebook.

Part of the multi-year KIND Snack & Give Back Project, the KIND® EQUALITY bar incorporates the colors of the women's suffrage movement -- white, purple, and gold to recognize the centennial anniversary of women receiving the right to vote. The snack comes in one flavor, Caramel Almond & Sea Salt, and will be sold exclusively on www.kindsnacks.com beginning March 3rd through the end of the month, while supplies last.

About KIND Healthy SnacksSince 2004, KIND has been on a mission to make the world a little kinder one snack and act at a time. KIND was born out of its founder's desire to create a snack that was healthy and tasty, wholesome and convenient. What began as a line of premium Fruit & Nut bars sparked the creation of a new healthier snacking category. Today, KIND has a family of more than 80 snacks that offer solutions for a variety of occasions. KIND recently acquired Creative Snacks Co., a family owned better-for-you snack manufacturer based in North Carolina. Creative Snacks' award-winning snack offerings feature premium ingredients and include almond and coconut nut clusters, trail mixes, granolas, and pretzels.

KIND's recipes use nutrient-dense, premium ingredients like nuts, seeds, whole grains and fruit, which are recommended for a healthy diet. All snacks do not contain genetically engineered ingredients and are not sweetened with sugar alcohols or artificial sweeteners.

Kindness has always been at the core of its business. KIND was founded with a social mission, the KIND Movement, which celebrates and inspires kindness. Today, the Movement is brought to life through the brand and The KIND Foundation.

KIND is majority founder- and team-owned, and every full-time team member has a stake in the company. To learn more about KIND, KIND® bars and to join our Movement, visit kindsnacks.com.

About the Alice Paul Institute The Alice Paul Institute educates the public about the life and work of suffragist and equal rights activist Alice Stokes Paul (1885-1977). The architect of some of the most outstanding political achievements on behalf of women in the 20th century, Alice Paul was born on January 11, 1885 and dedicated her life to the single cause of securing equal rights for all women. A leading American suffragist, Alice Paul was a force in the passage of the 19th Amendment in 1920, which granted women the right to vote. In 1923 she authored and introduced the Equal Rights Amendment which, when ratified to the U.S. Constitution, will give legal and lasting equal protection to both women and men.

The Alice Paul Institute honors her legacy as a role model of leadership and continues her work in the quest for gender equality. The organization offers public history and girls' leadership development programs at Paulsdale, her childhood home and a National Historic Landmark located in Mount Laurel, New Jersey.

To learn more about Alice Paul, the Alice Paul Institute, or the Equal Rights Amendment please visit alicepaul.org and equalrightsamendent.org.

About Resistbot For ordinary citizens who want to have a voice in their democracy, Resistbot is a chatbot that provides an easy and effective way to be heard, both in officials' inboxes, and at the ballot box. In two minutes, Americans can compose and send a letter that Resistbot will deliver electronically, by fax, or by postal mail, and to their newspaper's editorial page. Users can also check and protect their voter registrations, find their nearest protest or town hall, and more, without downloading an app or using a website.

Resistbot has been proven by two published controlled studies across three elections to boost voter turnout among users, producing thousands of net votes and increasing voter likelihood by 50%. Since launching in March 2017, nearly five million Americans have used Resistbot. On their behalf, Resistbot has delivered 13 million letters, connected 100,000 minutes of calls, checked 500,000 voter registrations, submitted 10,000 letters to the editor, located 250,000 polling places, and supported many other civic actions.

Resistbot is a product of the Resistbot Action Fund, a non-profit with a mission of citizen engagement and government accountability. To discover everything Resistbot can do, visit resist.bot, or text RESIST to 50409 to be heard.