NEWARK, Calif., June 30, 2020 /PRNewswire/ -- Lucid Motors, which seeks to set new standards for sustainable transportation with its advanced luxury EVs, today announced that it has achieved a new benchmark in aerodynamic efficiency for its groundbreaking luxury electric car, the Lucid Air. With tests recently completed at Windshear's advanced rolling-road wind tunnel, Lucid verified a coefficient of drag of 0.21, making the Lucid Air the world's most aero-efficient luxury car. 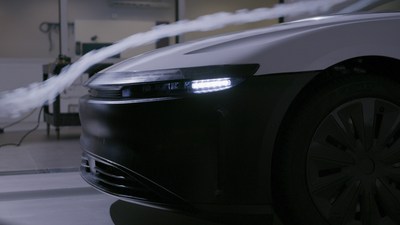 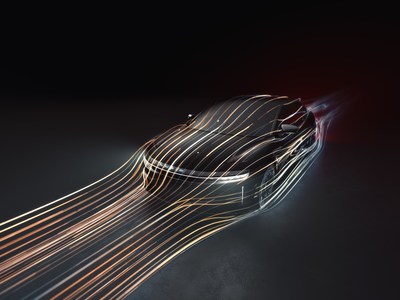 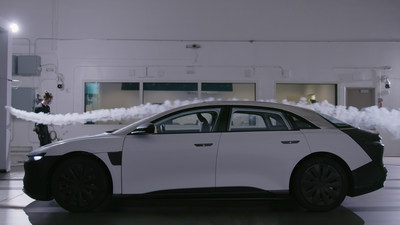 "Aerodynamic efficiency plays a key role in achieving world-beating range and performance, and is particularly valuable to an EV in that it provides "smart range" independent of battery pack size. So naturally we intensively focused upon aerodynamics throughout the Lucid Air's development," said Peter Rawlinson, CEO and CTO, Lucid Motors. "Our aero team worked seamlessly with design and engineering counterparts, establishing aero efficiency as a core tenet of Lucid Air from its very inception, enabling us to achieve this new standard."

Lucid achieved this milestone by devoting as much attention to aerodynamic efficiency as it does to the advanced electric powertrain that is developed entirely in-house, to endow the Lucid Air with more than 400 miles of range per charge in real-world driving. The Lucid aerodynamics team comprises leading technologists and analysts drawn from the worlds of automotive and motorsport, with four Formula One World Championships under their belt.

"Key to our development process was creating Lucid's own meticulous aerodynamic design philosophy for electric vehicles honed from years of success in Formula One," said Jean-Charles Monnet, Lead Aerodynamicist, Lucid Motors. "We applied lessons learned from shaping the world's highest performance racing machines as integral to the Lucid Air's design process. It's not just about achieving the lowest coefficient of drag, it's also key to have a highly balanced performance vehicle with precisely managed airflow in all aspects."

The new industry benchmark was recorded at Windshear's facility in Concord, North Carolina, which is considered one of the most advanced automotive wind tunnels in the world. Designed to service customers from both the production vehicle and race car industries, Windshear's tunnel features a closed-air circuit, temperature-controlled system built around a rolling road. The rolling road accommodates full-size vehicles, with air and rolling road speeds coordinated up to 180 mph. Air is moved through the massive circuit at a maximum rate of 47,500 cu ft per second by a 5,100 hp motor and 29 carbon fiber blades that are 22 feet in diameter.

"Windshear has tested thousands of vehicles across the full spectrum of consumer and racing use cases, with electric vehicle testing having become a core competency in recent years," said Brian Nelson, Manager, Windshear Inc. "We were impressed with Lucid's attention to detail in maximizing efficiencies and securing this aero milestone."

The industry-defining aero efficiency can be seen on the skin of the beautifully designed Lucid Air, with functional surfaces and details that work together to guide air efficiently through and around the car. This includes side air intakes in the front fascia that smooth airflow around the typically turbulent wheel wells, aerodynamically optimized wheel designs, and vents in the hood that channel air smoothly around the flanks of the car. Beneath the skin, the Lucid Air features a proprietary and patented vortex-generating air intake system behind the front bumper. This system maximizes cooling performance by uniformly distributing air on heat exchange surfaces while minimizing the size of the air intake aperture, further increasing aero efficiency. It also has the added benefit of enabling Lucid's sleek frontal design.

Underneath the Lucid Air, the uninterrupted smooth undersurface curves progressively upward towards the rear to form an aerodynamic diffuser. The effectiveness of this diffuser has been enhanced by extending it forward by virtue of the battery pack itself providing part of its curved form. This is another Lucid innovation, in keeping with its philosophy of the battery performing multiple functions within the car, contributing more than simply providing a source of energy. So here, the very shape of the battery pack enhances the car's aerodynamics.

In real-world testing, the Lucid Air's aerodynamic efficiency has contributed to Beta prototypes already achieving comfortably over 400 miles of range on public roads at highway speeds. Furthermore, track testing and top speed runs continue to be included in the development process to ensure high-speed stability and to validate the functionality of aerodynamic systems. Thus far, a Lucid Air Alpha prototype has achieved a GPS-confirmed top speed of 235 mph, and more high-speed testing is planned for this summer with the company's Beta fleet of prototype vehicles.

"Range and performance are usually perceived as mutually exclusive, but a focus upon key efficiency determinants such as aerodynamics can truly benefit both. A further factor is that Lucid Air's frontal area, or 'A,' is also particularly low as a consequence of the Air's innovative "Space Concept" design package layout. The resultant combination of a low coefficient of drag with a low frontal area creates a beneficial multiplier effect upon total drag force on the car, and it's this multiple that influences range," said Rawlinson. "When we debut the production version of the Lucid Air in September, the world will see a beautiful design that sets a new benchmark for electric vehicles, and a landmark for cars in general."

The production version of the Lucid Air will debut in an online reveal on September 9, 2020. In addition to the vehicle's final interior and exterior designs, new details on production specifications, available configurations, and pricing information will also be shared.

Lucid's mission is to inspire the adoption of sustainable transportation by creating the most captivating electric vehicles, centered around the human experience. The company's first car, the Lucid Air, is a state-of-the-art luxury sedan, featuring a California-inspired design underpinned by race-proven technology. Featuring luxurious interior space in a mid-size exterior footprint, the Air will be capable of over 400 miles range and 0-60 mph in under 2.5 seconds. Production of the Lucid Air will begin in late 2020 in Lucid's new factory in Casa Grande, Arizona.

Lucid Announces Extension Of Redemption Date For Its Public...