BEIJING, July 6, 2020 /PRNewswire/ -- Kuaishou introduces the story of Lu Kaigang ('Xiao Xianren'), a 21-year-old villager in China who rose to fame after shooting and posting short-video on Kuaishou.

Lu Kaigang, a 21-year-old villager from rural Guangxi, China, known for his countryside modelling videos on short-video platform Kuaishou, has captured international attention from the world's elite and exclusive fashion houses. He has received invitations to walk at the some of the largest fashion weeks on the global stage. 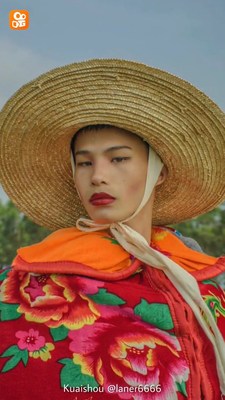 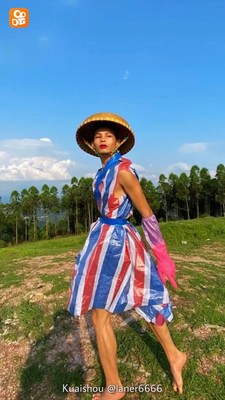 Lu has over 4 million followers on his Kuaishou account, where he posts videos under the name 'Xiao Xianren'. Lu rose to fame chasing his passion for modelling whilst working as a waiter and a factory worker in Nanning, the capital of Guanxi.

"I have had a supermodel dream since I was ten, (while I was) still in primary school. I saw a fashion show on TV when I felt it was so cool to do that on the runway," said Lu. Since then, he practiced the catwalk every day.

Without access to any professional training, he learned to catwalk by imitation from fashion show videos. Without a team assisting him, by his aesthetic talents, Lu designed and made couture using ready materials, from bamboo sticks, plastic bags to even an air conditioner. He turned everywhere into his runway, ranging from a narrow alley to a derelict factory.

"From couture designing and making, to filming, clipping, and posting, these were extremely time-consuming but barely received feedback online at the beginning as a result. But I still enjoyed the process," said Lu.

"The early dozens of videos I posted even didn't receive much 'likes'," Lu recalled. "But I believed what I've done would be recognized by the world someday." Lu persisted in posting his fashion works onto Kuaishou where he hoped to be seen by more people.

Lu's early works were ridiculed as many thought of him as a funny clown dressed in bizarre costumes. However, Lu's perseverance, coupled with Kuaishou's visibility algorithms, enabled Lu to be seen, which eventually helped him to enter mainstream fame.

Lu's fans were also one reason how he rose to fame. On his videos, comments such as "He's undeniably talented… every piece he made is wearable" or "This kid needs to be on an international runway," appear every few seconds. Lu counts other supermodels amongst his fans. Jin Dachuan, one of the most well-known Asian supermodels, has praised Lu, saying that he was amazed to see Lu's supermodel temperament.

Lu's big break came in August 2019, where Lu's fans uploaded his videos from Kuaishou to YouTube. As that video became viral, more people became curious about Lu and his international career took off from there. As his following grew on Kuaishou and other social media platforms, media outlets started taking notice. Goldthread reached out to him for his first editorial photoshoot with Elle magazine. The spring-summer 2020 edition of London Fashion Week invited Lu to walk.

"I like staying in nature. That was my runway. I enjoyed the freedom to perform alone. I will miss the experience of the catwalk in forests forever." Lu said.

When Lu worked in that village restaurant, he never expected that his dream would come into truth. The hills, trees, and fields were his only audience. However, by posting his videos on social media such as Kuaishou, Lu found his voice and a dedicated following.

In this social media era, countless amateur stars on Kuaishou have become famous by their efforts and talents, just like Lu. Lu's story serves to inspire even more content creators as his efforts and persistence to his dream make it possible to perform at the prestigious Milan Fashion Week, where it started from a willingness to post videos on Kuaishou.

Lu recalls suffering for his art. He once wore seven-centimeter-high heels on a mountain for a video that took over 5 hours to film. "At the end of the day, going through this process has helped me grow to appreciate that fashion plays a part in everyone's lives," said Lu.

Kuaishou Technology, headquartered in Beijing, China, runs Kuaishou, one of the world's leading short video social platforms since 2011, boasting more than 300 million daily active users so far. Users can use the platform to create and share videos with friends and their communities through posts, likes and comments. Known for its active and vibrant community of more than 20 billion daily views, the app is available on iOS and Android.