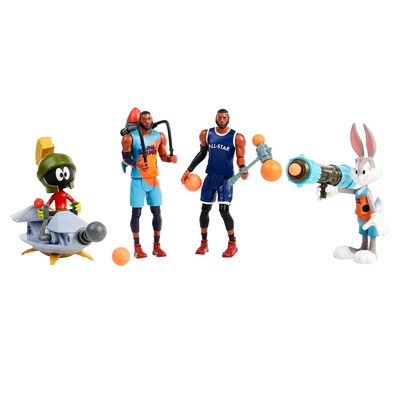 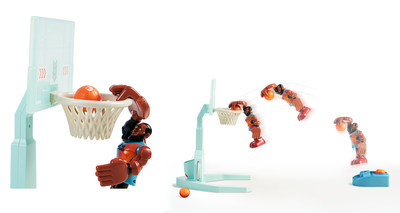 The pre-game begins in April, when the first toys from "Space Jam: A New Legacy" become available. Moose Toys' slam-dunk range will include action figures, playsets, collectibles, plush characters and more, including Goo Heroes, which are inspired by Moose Toys' hot brand, Heroes of Goo Jit Zu.  The line also includes the super innovative Super Shoot and Dunk LeBron James featuring the first ever action figure that really jumps, dunks and hangs-on-the-rim, just like LeBron's character in the film. The toy range features regular refreshes and new introductions throughout the fall and holiday season, sure to delight fans of all ages.

"To put our excitement about this partnership with Warner Bros. Consumer Products into basketball terms, it's like shooting a nothing-but-net-three-point-buzzer-beater to win the game," said Ronnie Frankowski, chief marketing officer, Moose Toys. "Working closely with Warner Bros., every attention to detail was paid to make sure our toys bring that big screen action into the hands of the fans. Our toys deliver awesome replicas of the stars of the movie, along with fresh new ways to play. We cannot wait for fans to bring their favorite characters home."

Space Jam: A New Legacy On Court Rivals Two-Pack Action FiguresCollect characters from "Space Jam: A New Legacy" to recreate some of the all-star moves and scenes with these cool action figures. LeBron James and the Tune Squad are ready to hit the court and take on their on-court rivals, the Goon Squad, with figures exclusive to the Rivals Two-Pack. These detailed collectible 5-inch figures are articulated and posable. Pose them competing against each other with the included accessories. Collect all the figures in the Rivals Two-Packs and hit the court for the ultimate basketball game. MSRP: $14.99

Space Jam: A New Legacy Goo HeroesSpace Jam: A New Legacy Goo Heroes take a page out of the playbook of another Moose Toys favorite: the Heroes of Goo Jit Zu. Pull, stretch and bend gooey Bugs Bunny to shoot and score like never before. And with two LeBron James options, kids can double-team the Goon Squad players, using his squish-and stretch-ability to dominate. MSRP $12.99.

Space Jam: A New Legacy Plush B-Ball BuddiesDiscover the Tune Squad's softer side with Space Jam: A New Legacy Plush B-Ball Buddies. Suited up in their uniforms they are dressed for play, and so super soft and snuggly they can just as easily spend their time in a good cuddle huddle. Collect all six starting team favorites, LeBron James, Bugs Bunny, Tazmanian Devil, Tweety, Daffy Duck and Lola Bunny, for a sleepy time slam dunk. MSRP $7.99.

About Moose ToysMoose Toys exists to make children Superhappy. It's at the heart of everything we do. The team has innovation in its DNA and is famous for the design, development and manufacture of award-winning toys that continue to disrupt the market! Moose Toys leads in categories including collectibles, craft, dolls, games and youth electronics and is consistently recognized as the most creative company in the industry.

About "Space Jam: A New Legacy"Welcome to the Jam!  Basketball champion and global icon LeBron James goes on an epic adventure alongside timeless Tune Bugs Bunny with the animated/live-action event "Space Jam: A New Legacy" from director Malcolm D. Lee and innovative filmmaking team that includes Ryan Coogler and Maverick Carter.  This transformational journey is a manic mashup of two worlds that reveals just how far some parents will go to connect with their kids. When LeBron and his young son Dom are trapped in a digital space by a rogue A.I., LeBron must get them home safe by leading Bugs, Lola Bunny and the whole gang of notoriously undisciplined Looney Tunes to victory over the A.I.'s digitized champions on the court: a powered-up roster of professional basketball stars as you've never seen them before.  It's Tunes versus Goons in the highest-stakes challenge of his life, that will redefine LeBron's bond with his son and shine a light on the power of being yourself. The ready-for-action Tunes destroy convention, supercharge their unique talents and surprise even "King" James by playing the game their own way.

Warner Bros. Pictures Presents a Proximity/The SpringHill Company Production, a Malcolm D. Lee Film, "Space Jam: A New Legacy."  The film will be distributed worldwide by Warner Bros. Pictures.  It will be released in theaters nationwide on July 16, 2021 and will be available in the U.S. on HBO Max for 31 days from theatrical release.

About Warner Bros. Consumer ProductsWarner Bros. Consumer Products, part of Warner Bros. Global Brands and Experiences, extends the Studio's powerful portfolio of entertainment brands and franchises into the lives of fans around the world.  WBCP partners with best-in-class licensees globally on an award-winning range of toys, fashion, home décor, and publishing inspired by franchises and properties such as DC, Wizarding World, Looney Tunes, Hanna-Barbera, HBO, Cartoon Network and Adult Swim. The division's successful global themed entertainment business includes groundbreaking experiences such as The Wizarding World of Harry Potter and Warner Bros. World Abu Dhabi. With innovative global licensing and merchandising programs, retail initiatives, promotional partnerships and themed experiences, WBCP is one of the leading licensing and retail merchandising organizations in the world.

Moose Toys Inspires Girls to Fearlessly Follow Their Dreams With...