DES MOINES, Iowa, Feb. 14, 2020 /PRNewswire/ -- Each year, thousands of farmers are exposed to the life-threatening hazards associated with entering grain bins to remove rotting or clumped grain. In just a few seconds, an adult can sink waist-deep in the quicksand-like suction of flowing grain, rendering them unable to free themselves without help. Although these hazards are well-known in the industry, they are often underestimated until it's too late. 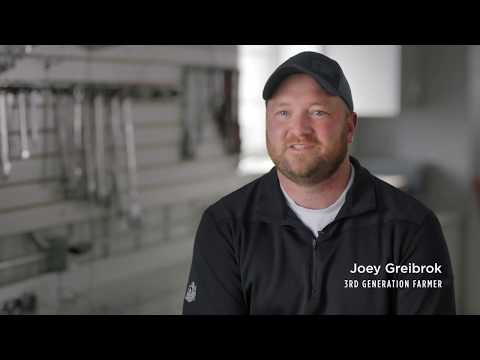 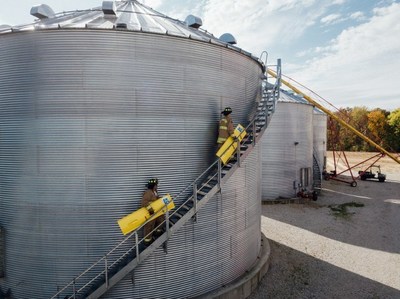 To raise awareness of these dangers and prevent all-too-common accidents, Nationwide has launched its seventh annual Nominate Your Fire Department Contest in recognition of Grain Bin Safety Week. The goal is to help prevent injuries and fatalities by promoting safe bin-entry procedures when entry is absolutely necessary, such as maintaining quality grain, testing bin atmosphere for toxic gases, wearing proper safety equipment and always utilizing a spotter who can help if needed. Nominations for this year's Nominate Your Fire Department Contest are open until April 30.

"We hope grain operators, farmers and community leaders will join us in expanding knowledge of safe practices not just during National Grain Bin Safety Week, but year-round," said Secretary Perdue.

Since 2014, Nationwide has awarded grain rescue tubes and training to 111 fire departments in 26 states.

"When we initiated Grain Bin Safety Week in 2014, the goal was to reduce the occurrence of grain bin accidents by raising awareness of the hazards and by equipping first responders with the tools and training needed to respond quickly when necessary," said Brad Liggett, president of Nationwide Agribusiness, the no. 1 insurer of farms and ranches in the U.S.1 "We applaud the USDA's efforts to bring further national attention to this issue and to our efforts to ensure fire departments have the resources they need."

Four fire departments included in the program have already put their tubes and training to action by rescuing workers trapped in grain bins. In 2017, the Glenville Fire Department in Minnesota received a call to assist a local farmer who had fallen into a grain silo. Utilizing the grain rescue tube and training provided to them nearly two years earlier, first responders were able to save the man's life even though he'd been engulfed up to his face in flowing corn. Nationwide and NECAS traveled to Glenville to get a first-hand account of the rescue in a video available here.

Most recently in June 2019, the Wauzeka Fire Department in Wisconsin utilized its rescue tube to save the life of a farmer trapped for more than an hour before he was discovered by a truck driver.

"In June, we were dispatched to help a neighboring department needing assistance with an individual entrapped in a grain bin," said Nick Zeeh, fire chief for the Wauzeka Fire Department. "Thanks to the training provided by Nationwide and its partners, every emergency responder had a good understanding of the steps they needed to take, and we were able to achieve the ultimate goal – the victim survived and everyone returned home. I can safely say without the grain bin rescue training, we would not have been as prepared or as effective in responding to the situation."

According to researchers at Purdue University, 370 grain entrapment cases have been recorded in the last 10 years. In 2018, 30 cases were documented, representing a 30% increase from 2017, with half (15) resulting in fatalities. Purdue also estimates that an additional 30% of cases go unreported each year. A recent story from United Press International also highlighted a startling uptick in grain bin accidents as farmers rush to clear last year's unused grain, with at least 14 people killed in grain bins between August and December 2019.

To help prevent further deaths and injuries, Nationwide collaborates each year with the National Education Center for Agricultural Safety (NECAS) to provide safety training. The director of NECAS travels to training locations with a state-of-the-art grain entrapment simulator and rescue tube. The comprehensive training sessions include classroom education and a rescue simulation with the entrapment tool, which is loaded onto a 20-foot trailer and able to hold about 100 bushels of grain.

For more information about the program, purpose or nomination process, visit www.grainbinsafetyweek.com or watch this video.

About Nationwide Nationwide, a Fortune 100 company based in Columbus, Ohio, is one of the largest and strongest diversified insurance and financial services organizations in the United States. Nationwide is rated A+ by both A.M. Best and Standard & Poors. An industry leader in driving customer-focused innovation, Nationwide provides a full range of insurance and financial services products including auto, business, homeowners, farm and life insurance; public and private sector retirement plans, annuities and mutual funds; excess & surplus, specialty and surety; pet, motorcycle and boat insurance. For more information, visit www.nationwide.com.

Who is H.E.R.? Nationwide's newest "On Your Side Soundtracks"...