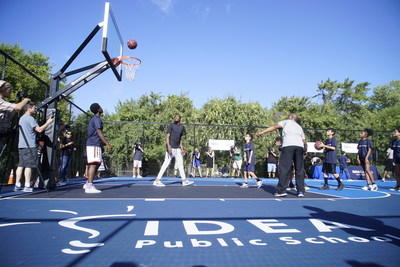 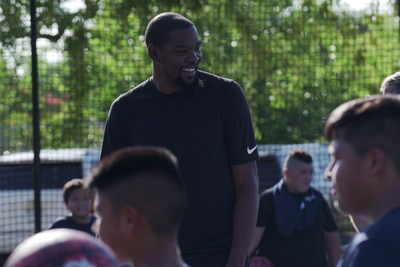 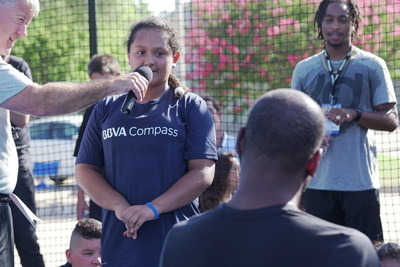 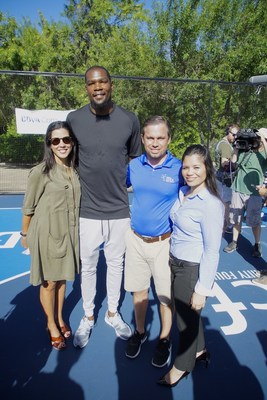 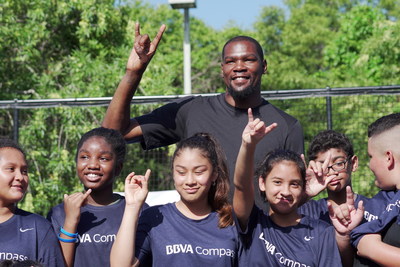 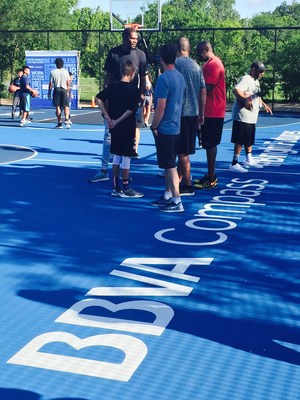 The students were attending a basketball clinic held on the school's outdoor basketball court, which debuted last year and is a joint endeavor between the BBVA Compass Foundation and the Kevin Durant Charity Foundation's Build It and They Will Ball court renovation program. The clinic was led by instructors from the Kevin Durant Youth Basketball Fantasy ProCamp, the two-day event for Austin-area youth that also started Thursday. Both the clinic and camp are being presented by BBVA Compass.

"It's great to come back to IDEA Rundberg today with BBVA Compass and see how this court is being put to such good use," said Durant. "This is a place where the students can live big and bright and build their futures. It's an honor to be able to give back to Austin in a way that makes a real difference in day-to-day lives."

Durant's appearance in Austin Thursday is his first in the city since winning the NBA Finals in June and being named MVP of the series.

BBVA Compass' Summer of Opportunity initiative kicked off in June with employees across the bank's footprint handing out $25 gift cards to the people and organizations of their choice. The bank also summoned its brand ambassadors, including Durant, to help promote the summer-long campaign to spread bright cheer and pay it back to the communities it calls home.

"This event today puts an exclamation point on our commitment to Austin," said Yolanda Davila, BBVA Compass' Community Relations Executive for Texas and also an IDEA board member. "We are out there every day helping families get into affordable homes, helping families build their futures, and it's nice to have such a phenomenal role model as Kevin come together with us during our Summer of Opportunity to help bring attention to those efforts and create such an amazing opportunity for the IDEA students."

The BBVA Compass Foundation, which dedicated $100,000 to the court at IDEA Rundberg, helps carry out the bank's mission to be an engine of opportunity by broadening access to education and affordable housing, among other aims. The court is a vivid illustration of both the bank's dedication to Austin and the power of private industry to step in where other funding sources fall short. As a charter school, IDEA Rundberg receives approximately 75 percent of its funding from state and federal sources, compared to traditional public schools, and relies on private donations to pay for its facilities.

IDEA's Austin Rundberg campus serves more than 700 students in its Academy and College Prep schools, and is part of the growing IDEA Public Schools network of charter schools serving more than 36,000 students across Texas. For the past 11 years, 100 percent of IDEA graduates have been accepted to college, including Ivy League schools and other highly competitive universities.

"Our aim is to give the promising young people who walk through our doors whatever they need to build big futures, and we are marshaling all of the resources we can to help us achieve that," said IDEA Rundberg College Prep Principal Taylor Nichols. "We're proud to be able to stand with such committed partners in BBVA Compass and Kevin Durant in the service of that goal."

About BBVA GroupBBVA is a customer-centric global financial services group founded in 1857. The Group is the largest financial institution in Spain and Mexico and it has leading franchises in South America and the Sunbelt Region of the United States; and it is also the leading shareholder in Garanti, Turkey's biggest bank for market capitalization. Its diversified business is focused on high-growth markets and it relies on technology as a key sustainable competitive advantage. Corporate responsibility is at the core of its business model. BBVA fosters financial education and inclusion, and supports scientific research and culture. It operates with the highest integrity, a long-term vision and applies the best practices. More information about BBVA Group can be found at bbva.com.

About BBVA CompassBBVA Compass is a Sunbelt-based financial institution that operates 657 branches, including 342 in Texas, 89 in Alabama, 63 in Arizona, 61 in California, 45 in Florida, 38 in Colorado and 19 in New Mexico. BBVA Compass ranks among the top 25 largest U.S. commercial banks based on deposit market share and ranks among the largest banks in Alabama (2nd), Texas (4th) and Arizona (5th). BBVA Compass has been recognized as one of the leading small business lenders by the Small Business Administration (SBA) and ranked 5th nationally in the total number of SBA loans originated in fiscal year 2016. Additional information about BBVA Compass can be found at www.bbvacompass.com. For more BBVA Compass news, follow @BBVACompassNews on Twitter or visit newsroom.bbvacompass.com.

About IDEA Public SchoolsIDEA Public Schools believes that each and every child can go to college. Since 2001, IDEA Public Schools has grown from a small school with 150 students to the fastest-growing network of tuition-free, Pre-K-12 public charter schools in the United States. Currently, the network serves nearly 36,000 college-bound students in 61 schools across three Texas regions. Additionally, IDEA boasts national rankings on The Washington Post and U.S. News & World Report's top high schools lists and is on-track to maintain its legacy of sending 100% of its graduates to college.