More than 1 in 5 children face hunger

CHICAGO, June 4, 2012 /PRNewswire-USNewswire/ -- A new study released today by Feeding America® shows that children continue to struggle with hunger in every county in the nation. More than 1,000 counties have more than one in four children who are at risk of hunger.

The study, "Map the Meal Gap: Child Food Insecurity 2012" gives a one-of-a-kind look at the occurrence of child food insecurity in the U.S. at a county level. The report—along with an interactive map released today—charts the prevalence of food insecurity* among children in every county and congressional district in the nation.

By providing the information at a county level, agencies and civic leaders can assess where the need is greatest to help feed the more than 16 million children nationwide who deal with the potential of hunger.

"In order to meet the needs of children who are food insecure, we need to look at the communities in which they live," said Vicki Escarra, president and CEO of Feeding America, the nation's largest hunger-relief organization. "For example, if we find that there are significant numbers of children in a particular county who are entitled to be enrolled in child nutrition programs, but are not, our priority should be to increase enrollment.

"On the other hand, we also need to know if there are a number of families whose household income is too high, or who have too many financial assets, to qualify for these programs. If the only way to get additional food to them is through charities, such as the agencies served by our food banks, then we know we need to make that our priority."

Feeding America will provide more than 3.2 billion pounds of food and groceries this year through its network of 202 food banks that serve about 61,000 food pantries, shelters and soup kitchens.

The ConAgra Foods Foundation funded this research with the goal of advancing the collective understanding of child hunger in America, so that resources at the local and national level could be better leveraged to help children and families in need. The research is based on "Map the Meal Gap 2012: Food Insecurity Estimates at the County Level", supported by the Howard G. Buffett Foundation and Nielsen.

* "Food Insecurity" is a phrase used by the USDA to describe lack of consistent access to adequate amounts of food for an active, healthy life.

Feeding America provides low-income individuals and families with the fuel to survive and even thrive. As the nation's leading domestic hunger-relief charity, our network members supply food to more than 37 million people each year, including 14 million children and 3 million seniors. Serving the entire United States, more than 200 member food banks support 61,000 agencies that address hunger in all of its forms. For more information on how you can fight hunger in your community and across the country, visit http://www.feedingamerica.org. Find us on Facebook at facebook.com/Feeding America or follow our news on Twitter at twitter.com/FeedingAmerica.

Fight Hunger with Feeding America and its Partners this Holiday... 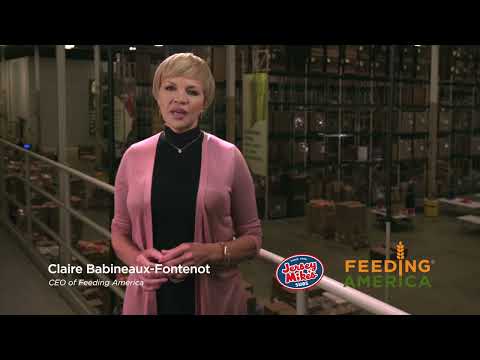