TORONTO, Dec. 10, 2020 /PRNewswire/ - Nickel Creek Platinum Corp. (TSX: NCP) ("Nickel Creek" or the "Company") is pleased to announce the results of its 2020 ground-based Electromagnetic (EM) geophysics and drilling program at its 100%-owned Nickel Shäw Project located in the Yukon, Canada.  Using a large loop transient electromagnetic (TEM) survey, the 2020 program tested the Arch and Burwash exploration target areas, which are along trend approximately 2.0 kilometres to the northwest and 5.0 kilometres southeast (respectively) of the main Wellgreen deposit.  This program resulted in identification of 42 conductive anomalies, with 11 of these determined to be potentially massive nickel sulphide. 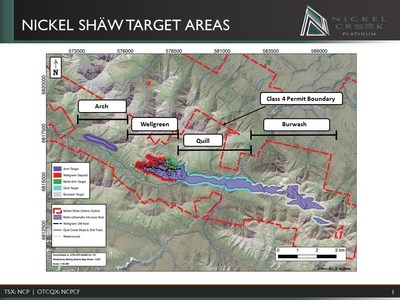 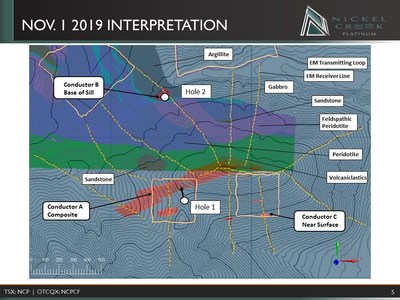 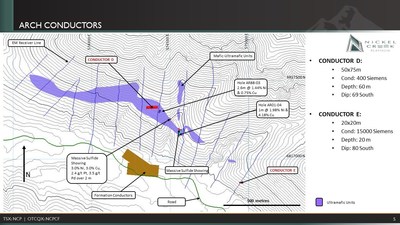 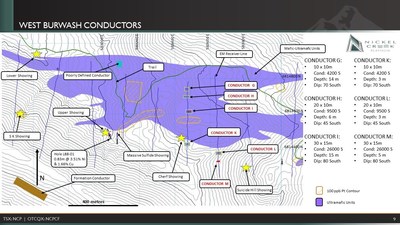 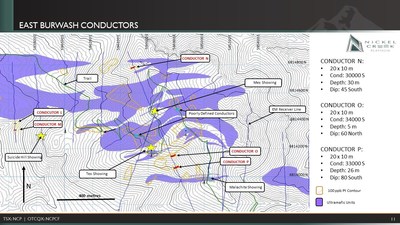 In addition to the TEM survey, a limited, 2-hole diamond drilling program totalling 675 metres was carried out at the Quill area, located 1.7 kilometres southeast of the Wellgreen deposit. This drilling tested 2 conductors, A and B, detected during the 2019 TEM survey of the Quill area. See Figure 1 for a property scale map of the Nickel Shäw Project area.  With no significant nickel-copper (Ni-Cu) sulphide intersected in either Conductor A or B and assay results yielding no well-mineralized intervals, the Company will now focus on the higher priority targets identified in the Arch and Burwash target areas.

Stuart Harshaw, President and CEO of Nickel Creek commented: "The focus of the 2019 and 2020 programs was to perform an EM survey over the entire Nickel Shäw Project area in order to identify potential high grade nickel targets within the prospective ultramafic rock unit. The survey was highly successful in identifying over 40 conductive targets.  The limited 2020 drill program also improved our understanding of the geology in the area, allowing the Company to prioritize 11 highly conductive targets for future exploration."

The primary target for the 2020 drill exploration program was Conductor A, which has a strike length of 800 metres and is a composite of several conductive plates. This conductor has conductance of 5,000 Siemens and a depth to top of 200 metres below surface. The drill hole testing of Conductor A was approximately 561 metres and was collared in Station Creek Formation volcanics and drilled through Hasen Creek Formation sediments before encountering the peridotite sill. Based on observations in the core and the borehole EM survey, the conductivity appears to be centred above the hole and caused by sheared graphitic sediments. Geological mapping and drill core observations suggest the sequence is overturned and that the footwall of the sill was cut by the drill hole.  The second hole drill tested Conductor B for approximately 114 metres, and Conductor B was drilled entirely in serpentinized peridotite. The conductivity at Conductor B appeared to be related to a superparamagnetic response in the peridotite and was later confirmed with borehole geophysics. See Figure 2.

Sixteen loops were used in the 2020 campaign, covering 29 kilometres of data on 42 separate lines.  The data collection was completed by SJ Geophysics from Vancouver British Columbia (see Figure 3 below for a survey overview).  Receivers recorded readings at each 25-metre station utilizing two separate loops transmitting simultaneously at 3.75 and 5.625 Hertz.

The 2020 EM program identified 42 total conductive anomalies, with 11 of these identified as potentially nickel massive sulphide.  The 11 conductors are generally in the size range of 20 metres x 30 metres with the largest up to 50 metres x 75 metres, and are very highly conductive (up to 26,000 Siemens).  Given the reading size of the modelled conductors, the possibility exists that a larger, highly fractured or cluster of similar conductors exists in the vicinity of each target, but only the closest conductor to each survey line can be identified.

Conductor D, located in the Arch area (see Figure 4), represents a highly promising EM conductor for potential follow-up work given its size and direct correlation with high grade surface showings of Ni-Cu sulphide. The conductor is also supported by two shallow historic drill intersections of Ni-Cu sulphide within 250 metres of the conductor. One of the nearby surface showings had historic channel samples grading up to 3.0% Ni, 3.0% Cu, 2.4 g/t Pt and 3.5 g/t Pd over 2.0 metres. A historic 1988 drill hole, AR88-03, intersected 1.4% Ni and 0.8% Cu over 2.6 metres (core length) at 14 metres down-hole. A 2001 historic drill hole, AR01-04, intersected 2.0% Ni and 4.2% Cu over 1 metre (core length) at 55 metres down-hole. Conductor D can be tested by one or more holes drilled from a ridge to the south-southeast. Conductor E occurs approximately 700 metres along the trend of the ultramafic sill to the southeast of Conductor D. This highly conductive body does not have mapped ultramafic or associated Ni-Cu sulphide showings. An example of the learning from the 2020 Drill Program is that a larger conductor that was detected approximately 250 metres south of the ultramafic sill, brown rectangles in Figure 4, has similarities to Conductor A and is believed to be formational (likely graphite bearing) in nature and therefore there are no current plans to test it further.

Two historic showings occur in the East Burwash area. The Tex and Mex showings were discovered during mapping and soil sampling work in the 1980s and are characterized by disseminated sulphide mineralization in gabbro and sheared gabbro. A historic surface chip sample at Mex graded 0.5% Ni, 0.5% Cu, 1.4 g/t Pt and 1.6 g/t Pd over 6.0 metres. Conductors O and P occur approximately 200 metres southeast of the Tex Showings adjacent to historic multi-element soil anomalies outlined by the 100 ppb Pt contour in Figure 6. These conductors lie between mapped ultramafic units, but are not underlain by ultramafic or gabbro.

Stuart Harshaw, President and CEO of Nickel Creek further commented: "The close spatial association of the conductors, combined with historical drilling and surface showings, is highly encouraging.  Any exploration drilling programs considered for 2021 should represent an opportunity to further test the potential of the Nickel Shäw property to host high-grade Ni-Cu massive sulphide that would enhance the large well-defined mineralization of the Wellgreen deposit."

Nickel Creek Platinum Corp. (TSX: NCP;OTCQB: NCPCF) is a Canadian mining exploration and development company and its flagship asset is its 100%-owned Nickel Shäw Project.  The Nickel Shäw Project is a large undeveloped nickel sulphide project in one of the most favourable jurisdictions in the world, with a unique mix of metals including copper, cobalt and platinum group metals. The Nickel Shäw Project has exceptional access to infrastructure, located three hours west of Whitehorse via the paved Alaska Highway, which further offers year-round access to deep-sea shipping ports in southern Alaska.  The Company is also investigating other opportunities for shareholder value creation.

The Company is led by a management team with a proven track record of successful discovery, development, financing and operation of large-scale projects. Our vision is to create value for our shareholders by becoming a leading North American nickel, copper, cobalt and PGM producer.