RICE LAKE, Wis., Nov. 25, 2020 /PRNewswire/ -- American gunmaker Henry Repeating Arms is announcing a large transition in their product catalog with upgrades for their Wisconsin-made lever-action rifles and shotguns and new calibers and configurations for their H015 Single Shot firearms. In total, the announcement is replacing 29 "legacy" models in favor of newly upgraded versions and adding 3 new Single Shots to the Henry lineup. 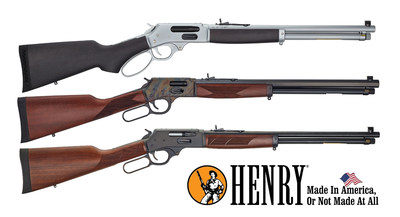 By popular demand, Henry Repeating Arms is replacing all steel-framed centerfire lever-action rifles and shotguns to include a side loading gate while still retaining the removable tube magazine based on the original Henry rifle patented in 1860. This open-ended magazine design, first introduced with the Henry H024 Side Gate Lever Action in 2019, provides owners with the ability to conveniently load the magazine and keep it topped off through a port in the receiver and safely unload the magazine by twisting out the inner magazine tube. The transition applies to all of Henry's .30-30 and .45-70 rifles, .410 bore shotguns, and revolver caliber Big Boy rifles in their blued steel, All-Weather, and Color Case Hardened finishes that do not already include a side loading gate.

"Ever since our fans and customers got a taste of a side loading Henry, the requests started rolling in immediately to include this feature on their favorite finish or caliber. These new models are going to make a lot of people very happy, and we are always going to have options for fans of our legacy configuration as well," states Anthony Imperato, president and owner of Henry Repeating Arms. Imperato continues, "The removable tube magazine is a core part of our product DNA, so that's not going anywhere, and fans of the classic brass and octagon barrel configurations will always be able to get that from us."

In addition to the new Side Gate models, Henry is announcing 2 new calibers for the H015 Single Shot Rifle with .350 Legend and .450 Bushmaster. For large game hunters in shotgun-only areas, Henry is also releasing the Henry Single Shot Slug Barrel Shotgun in 12 gauge, which features a fully rifled barrel for use with shotgun slugs and fiber optic sights.

To learn about Henry's newest releases, visit the New Models category at HenryUSA.com.

Henry firearms can only be purchased through a licensed firearms dealer. For more information about Henry Repeating Arms and its products visit henryusa.com or call 866-200-2354.

About Henry Repeating Arms:Henry Repeating Arms is one of the leading rifle and shotgun manufacturers in the United States and a world leader in the lever action category. The company motto is "Made in America, or not made at all" and its firearms come with a lifetime guarantee backed by award-winning customer service. The company is also known for its charitable endeavors under its Guns For Great Causes program, which focuses on sick children, both individual cases and children's hospitals, veteran and wounded veteran organizations, Second Amendment and wildlife conservation organizations. The company currently employs 535 people and has 250,000 square-feet of manufacturing space in its Rice Lake, Wisconsin and Bayonne, New Jersey facilities. The company is named in honor of Benjamin Tyler Henry who invented and patented the Henry rifle in 1860 – the first repeating rifle, the lever action rifle, which is America's unique contribution to international firearms design and is one of the most legendary, respected and sought after rifles in the history of firearms. Visit Henry Repeating Arms online at www.HenryUSA.com, on Facebook at www.Facebook.com/HenryRepeating, and on Instagram @Henry_Rifles.