PLANO, Texas, Nov. 5, 2019 /PRNewswire/ -- This summer, five women of varying ages and backgrounds converged in the suburbs of Dallas to begin a whirlwind journey with seemingly one thing in common: they were finalists in the inaugural Stacy's Rise Project, a funding and mentorship program exclusively for female entrepreneurs in the food and beverage industry, given that female founders in the United States received only 2.3 percenti of venture capitalist funding in the last year. 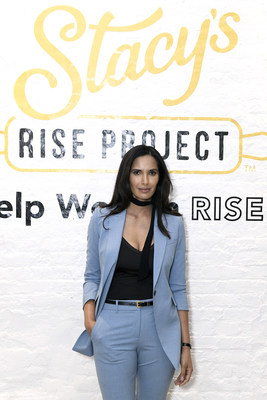 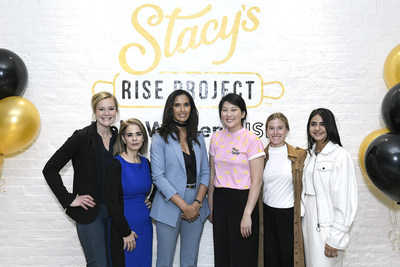 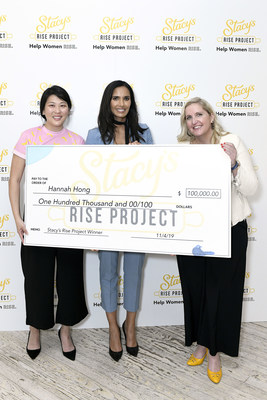 Yesterday, the strangers-turned-friends met again in New York City, all having earned $20,000 in business funding – but even richer after spending the last three months learning from top marketing, sales, innovation, R&D, and digital executives at PepsiCo and Frito-Lay. Fellow entrepreneur Padma Lakshmi, who helped select the five finalists from a pool of 400 applicants, brought the journey full circle when she announced Hakuna Brands Founder Hannah Hong of Los Angeles, Calif., as the $100,000 grand prize Stacy's Rise Project winner.

A first-generation American and daughter of two entrepreneurs, Hong left corporate America to chase her own American dream when she and her best friend first created Hakuna Brands as a banana-based, non-dairy frozen dessert to answer their lactose intolerance.

"Frito-Lay's established innovation and brand strategy framework empowered me to more clearly articulate what's unique and amazing about Hakuna Brands in a tangible, meaningful way for our customers," said Hong. "While I personally have reaped many rewards with the Stacy's Rise Project, its reach is so much greater, as the people I've met and everything I've learned will have a lasting impact on anyone who interacts with our brand and products for years to come."

In the spirit of furthering female entrepreneurs, Hong's win is also perfectly timed to Women's Entrepreneurship Day on November 19, an annual celebration dedicated to the recognition and empowerment of women in the workplace. This year, Stacy's is further celebrating by bringing a specialized line of Stacy's Rise Project-inspired packaging to store shelves.

Hong and her fellow finalists – Hannah Dehradunwala of Transfernation (New York, N.Y.), Pilar Gonzalez of Dip It by Pilar (Mission City, TX), Kate Holby of Ajiri Tea (Upper Black Eddy, Pa.), and Michelle Liddle of The Perfect Granola (Victor, N.Y.) – concluded their mentorship program and put the finishing touches on their updated business plans in late October, inspired by the success of Stacy Madison who founded Stacy's Pita Chips and for which the Stacy's Rise Project is named.

"The energy among these five women is palpable and now, fueled by this newfound camaraderie and the experience they've gained through Frito-Lay and PepsiCo, I'm sure it won't be the last we hear from any of them," said Lakshmi. "They are an inspiration to not only other women who share a similar drive and passion to build something of their own, but to investors as proof that female entrepreneurs warrant consideration and funding."

"All five of our Stacy's Rise finalists have distinct products and skill sets – and their personal experiences in the marketplace offered our own team members a unique start-up perspective that made the mentorship program a win-win as we learned from each other," said Ciara Dilley, vice president, marketing, Frito-Lay North America. "It was a tight race from day one, with Hannah's final business plan coming out on top thanks to her consumer-centric yet strategic growth strategy that zeroed in on what made her brand unique while leveraging established distribution channels."

With the culmination of the 2019 Stacy's Rise Project, the program has awarded more than $300,000 to women in the food and beverage industry to advance their business plans and, since May, has built an online community of more than 1,500 businesswomen via Alice, a leading online platform for women and other minority entrepreneurs. To join the conversation, visit stacysrise.helloalice.com or follow #RiseProject2019 across social media.

About Stacy's® Snacks Stacy's Snacks is one of the many brands that make up Frito-Lay North America, the $15 billion convenient foods division of PepsiCo, Inc. (NYSE: PEP), which is headquartered in Purchase, NY. Learn more about Frito-Lay at the corporate website, http://www.fritolay.com/, the Snack Chat blog, http://www.snacks.com/ and on Twitter http://www.twitter.com/fritolay.

About PepsiCo PepsiCo products are enjoyed by consumers more than one billion times a day in more than 200 countries and territories around the world. PepsiCo generated more than $64 billion in net revenue in 2018, driven by a complementary food and beverage portfolio that includes Frito-Lay, Gatorade, Pepsi-Cola, Quaker and Tropicana. PepsiCo's product portfolio includes a wide range of enjoyable foods and beverages, including 22 brands that generate more than $1 billion each in estimated annual retail sales.

About Hakuna Brands Hakuna Brands is a Los Angeles-based "nice cream" company founded by UC Berkeley graduates and second-generation Korean Americans, Hannah Hong and Mollie Cha. Hakuna Brands began as a passion project between two best friends that prioritized healthy lifestyles but weren't willing to compromise on the flavor of their favorite dessert. Today, the company has more than 9 flavors of vegan, non-GMO, plant-based ice cream in a variety of formats, including pints, novelty bars and soft serve. They also have a soft serve shop located in Hawaii.

About Alice Founded by Carolyn Rodz and Elizabeth Gore, Alice is a free platform that helps business owners find the right path to start and grow their companies by matching them with resources and opportunities. As a social enterprise, Alice supports equal access and opportunity for all business owners, no matter where they come from or who they know. www.helloalice.com

About Padma Lakshmi Emmy-nominated Padma Lakshmi is internationally known as a food expert, model, actress and best-selling author, as well as the recipient of Variety's Karma Award and the NECO Ellis Island Medal of Honor. Lakshmi serves as host and executive producer of Bravo's Emmy-winning series Top Chef, which garnered a 2019 Emmy nomination for Outstanding Reality-Competition Program, the show's 13th consecutive Emmy nod. In 2020 Lakshmi will host and executive produce a new show for Hulu, marking the network's expansion into original food programming. The new half-hour series will serve as a "living cookbook" focused on people and cultures which have contributed to American cuisine.

Lakshmi established herself as a food expert early in her career, having hosted two successful cooking shows and writing the best-selling Easy Exotic, which won the "Best First Book" award at the 1999 Gourmand World Cookbook Awards. Lakshmi followed this success with the publication of her second cookbook, Tangy, Tart, Hot & Sweet. In 2016, she released her food memoir, The New York Times best-selling Love, Loss and What We Ate, which won "Best Lifestyle, Body & Soul" at the 2017 Gourmand World Cookbook Awards, followed by The Encyclopedia of Spices & Herbs.

Along with a breadth of business ventures, from a home décor line that was sold nationally at Bloomingdale's to a global capsule collection in collaboration with MAC Cosmetics, Lakshmi is co-founder of the Endometriosis Foundation of America and serves as an artist ambassador for the ACLU with a focus on women's reproductive health and immigration issues.  Recently, she was appointed as a goodwill ambassador for the UN Development Program, seeking to boost support for its Global Goals including addressing inequality worldwide. She was also recently named a Visiting Scholar at Massachusetts Institute of Technology (MIT).

i According to data from Pitchbook's VC Female Founders Dashboard (updated October 2, 2019): https://pitchbook.com/news/articles/the-vc-female-founders-dashboard

Root, Root, Root for the Cubbies! Pepsi and the Chicago Cubs...