HONG KONG, May 10, 2021 /PRNewswire/ -- For most people around the world, important festivals and special days that usually bring family and friends together, have looked very different this past year. Many parts of the world are still reeling from the impact of Covid-19, some in their second or third wave, and restrictions continue to remain in place to prevent the spread of the virus. 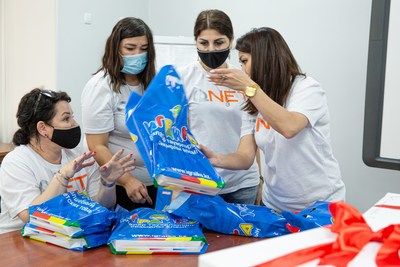 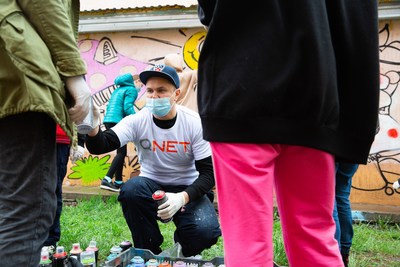 This month marks the holy period of Ramadan, an important time for millions of muslims around the world who mark this period with prayer, reflection, charity, and community. E-commerce powered direct selling company QNET, which has customers and distributors in many countries that celebrate this important occasion, is marking the month of Ramadan by joining hands with employees, its network of distributors, and local charitable organisations in 30 countries, to help the poor and underserved communities that bear the brunt of lockdowns.

"Poverty puts people at greater risk of getting infected, and also makes them carry the brunt of its economic fallout. Social distancing is a privilege for many who live in crowded settlements in close proximity to each other. Many have lost their source of income and are living in uncertainty. We wanted to do what little we could to bring some joy and cheer to those who need it the most during this holy month," says Malou Caluza, Chief Executive Officer of QNET.

QNET is arranging to provide food kits, cleaning supplies, groceries, and other household essentials to underserved families and organisations in countries in the Middle East, North and Sub Saharan Africa, and the Asia Pacific region throughout this month. These include countries such as Kazakhstan, Turkey, Ghana, Senegal, Tanzania, Pakistan, Malaysia, Indonesia, and more.

Some highlights from this year's global Ramadhan initiative by QNET include working with the largest humanitarian group in Algeria, Ness El Khir, to distribute food boxes and various household supplies to those in need. This follows QNET's partnership with Ness El Khir in the previous year, where QNET contributed to the Coffate El Khir initiative to uplift the spirits of poor families in Algier and neighbouring provinces. Seeing the impact of Coffate El Khir and how it helped many disadvantaged families, especially during the Ramadhan season, motivated QNET employees and distributors to join forces with Ness El Khir again to bring a smile to their faces once more.

In Bamako, Mali, QNET made a repeat donation of supplies and food packs to a refugee camp housing around 2,500 refugees who fled from a devastating fire this past year. This donation offered welcome relief for the refugees as they consisted of families living in extreme poverty due to losing their homes and property in the disaster.

In various Central Asian countries such as Kazakhstan, Russia, Tajikistan, and Azerbaijan, QNET employees and distributors packed and handed out hundreds of food packs to underprivileged families, orphanages, and social centres across major cities to ensure they have a warm, hearty meal when breaking fast. QNET also reached out to an orphanage in Tatartan, Russia, and aided in reparation efforts in addition to donating food packs to the children and staff. QNET distributors took the extra step to buy new clothes and shoes for the children for them to celebrate Ramadhan. QNET also donated cleaning supplies, an air purifier, and held a community session where QNET distributors and local artists helped paint the walls of a children's boarding school in Nur-Sultan, Kazakhstan. The colourful murals brightened the school compound and it resulted in a fun exercise for both adults and children.

In Morocco, QNET worked in tandem with the Moroccan Association For Solidarity And Development (AMSED) to deliver food baskets to Moroccan families in need.  The baskets contained an assortment of essential food supplies such as dry goods that have long shelf life. AMSED is a non-profit established in 1993 that is also an advisory member of the United Nations Economic and Social Council.

"We started this yearly Ramadhan initiative as a pledge to lead the change that we want to see in the world. We have plans to expand our reach, double our efforts, and give back to more communities in the next year. We hope that by staying true to the spirit of RYTHM and continuously giving back to those in need, we can make a lasting, positive impact in the hearts of many," Caluza adds.

QNET's philosophy of RYTHM, an acronym for 'Raise Yourself To Help Mankind' is the driving force of the company focused on empowering people and communities so that they have the ability to uplift themselves and make a difference.

QNET has worked with multiple community programs and organisations throughout the past decade to extend aid to the vulnerable, such as during the global lockdown occurred last year; QNET reached out to numerous affected communities to lend support and carry out relief projects to ease their burden. For example, QNET provided multiple units of their flagship HomePure air purifier and water purification products to hospitals and medical stations in Dubai and Morocco to keep them safe and healthy.

More information on QNET's global community initiatives and programmes can be found on the official QNET blog, and on the company's social impact initiative arm, RYTHM Foundation's website.

QNET is one of Asia's leading e-commerce based direct selling companies offering a wide range of health, wellness and lifestyle products that enable people to lead better lives. QNET's grass-roots business model fuelled by the power of e-commerce has helped empower millions of entrepreneurs in more than 100 countries worldwide.

QNET is headquartered in Hong Kong and has a presence in more than 25 countries around the world through subsidiaries, branch offices, agency partnerships, and franchisees.

QNET is a member of the Direct Selling Association in several countries, as well as the Hong Kong Health Food Association and the Health Supplements Industry Association of Singapore, among others.

QNET is also active in sports sponsorships around the world. Some of the more prominent partnerships include being the Direct Selling Partner of Manchester City Football Club and the African Club League Championships of CAF.

QNET Strengthens its Commitment to Sustainability with Global...

QNET's CSR Arm Supports Electrification Project to light up the...