ORLANDO, Fla., May 2, 2017 /PRNewswire/ -- Red Lobster's iconic Cheddar Bay Biscuits, the warm, savory, fresh out-of-the-oven biscuits that guests know and love, are turning 25! Introduced in 1992, Cheddar Bay Biscuits quickly emerged as a guest-favorite item. Over the years, the biscuits have continued to grow in popularity, earning a fan following and solidifying their place as an edible icon. 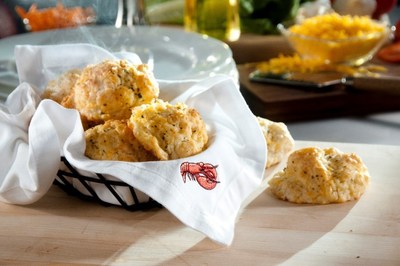 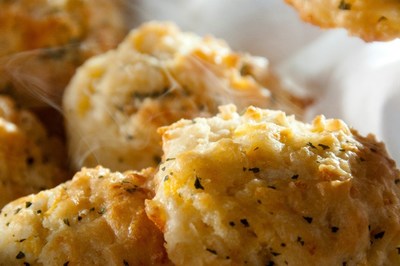 Mixed in-restaurant by hand using a top-secret recipe, Cheddar Bay Biscuits are made with quality-aged Cheddar cheese and finished with a savory garlic topping. Initially introduced as "freshly baked, hot cheese garlic bread," the iconic biscuits were coined "Cheddar Bay Biscuits" five years later to reflect the seaside atmosphere of Red Lobster restaurants. Red Lobster first served the biscuits on trays to guests in the lobby as they waited for their table, but because the demand for biscuits in the lobby was becoming so high, Red Lobster decided that they would be served at the table for guests to enjoy.

Today, thousands of team members across North America help Red Lobster bake nearly one million biscuits every day, putting a fresh batch in the oven approximately every 15-20 minutes. In fact, if all of the Cheddar Bay Biscuits served in one day were stacked up, it would tower 137 times the height of the Empire State Building.

Some other fun facts about Red Lobster's Cheddar Bay Biscuits include:

Throughout the month of May and beyond, guests are invited to celebrate this milestone by sharing their favorite Cheddar Bay Biscuit moments and memories on Red Lobster's Facebook, Twitter, and Instagram pages.

*Sweepstakes open to legal residents of United States of America only. Terms and conditions apply.

About Red Lobster Seafood Co.Red Lobster is the world's largest seafood restaurant company, headquartered in Orlando, Fla., with an impressive heritage and an even brighter future. As a private company owned by Golden Gate Capital, Red Lobster is focused on delivering freshly prepared seafood at reasonable prices - served in a lively, contemporary seaside atmosphere. With more than 55,000 employees in over 700 restaurants in the U.S. and Canada, and a growing international footprint, Red Lobster is more committed than ever to be not just the biggest seafood restaurant, but the best. To learn more, visit http://www.redlobster.com or find us on Facebook at http://www.facebook.com/redlobster or Twitter at http://www.twitter.com/redlobster.