KNOXVILLE, Tenn., Nov. 14, 2018 /PRNewswire/ -- Regal, a leading motion picture exhibitor operating one of the largest theatre circuits in the United States, will host Aquaman star Patrick Wilson at the movie's exclusive advance screening on Thursday, December 13, benefitting Variety – The Children's Charity of Eastern Tennessee. In partnership with Warner Bros. Pictures, Regal is bringing Wilson to the Pinnacle theatre in Knoxville to meet fans and promote the deserving charity. 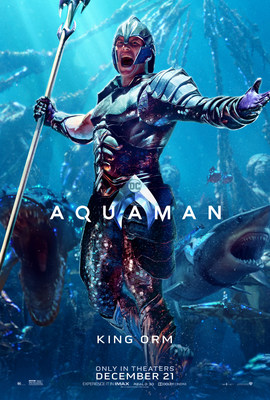 "We are excited to welcome Patrick Wilson to Knoxville for a benefit screening of this highly anticipated film," said Ken Thewes, CMO at Regal. "As a Golden Globe, Emmy and Tony Award nominee, Wilson is an incredibly talented performer, and we cannot wait for his return to the big screen with Aquaman. We are grateful to our friends at Warner Bros. for making this screening possible and helping raise funds for Variety's special needs children."

Variety – the Children's Charity is a multi-million-dollar philanthropic organization that empowers children with special needs to grow, socialize, and express themselves independently. With 43 chapters in 13 countries, Variety makes an impact on both local and national levels through medical equipment donations, specialized therapeutic programs and well-placed donations. Regal established the local chapter of Variety in 2001 and has since raised over $10 million to aid children in East Tennessee.

Beginning Friday, November 16, a limited number of tickets will be available for sale to the public at the Regal Pinnacle theatre in Knoxville. Advance tickets are $50 through Thursday, December 6 and will increase to $75 on Friday, December 7 with all proceeds benefiting Variety – the Children's Charity. All event guests will enjoy a catered reception in the Pinnacle lobby before Wilson walks the red carpet. After the red carpet reception, attendees will have the opportunity to be some of the first moviegoers to view the movie.

About Aquaman: From Warner Bros. Pictures and director James Wan comes an action-packed adventure that spans the vast, visually breathtaking underwater world of the seven seas, Aquaman, starring Jason Momoa in the title role and Jason Patrick as Orm/Ocean Master. The film reveals the origin story of half-human, half-Atlantean Arthur Curry and takes him on the journey of his lifetime—one that will not only force him to face who he really is, but to discover if he is worthy of who he was born to be... a king.

Wan directs from a screenplay by David Leslie Johnson-McGoldrick and Will Beall, story by Geoff Johns & James Wan and Will Beall, based on characters created by Paul Norris and Mort Weisinger for DC.  The film is produced by Peter Safran and Rob Cowan, with Deborah Snyder, Zack Snyder, Jon Berg, Geoff Johns and Walter Hamada serving as executive producers.

About Regal:Regal, a subsidiary of the Cineworld Group, operating one of the largest and most geographically diverse theatre circuits in the world, with over 9,000 screens across 11 territories including over 7,300 screens in the United States, located in 557 theatres in 43 states along with Guam, Saipan, American Samoa and the District of Columbia as of September 30, 2018. We believe that the size, reach and quality of the company's theatre circuit provides its patrons with a convenient and enjoyable moviegoing experience. We are committed to being 'The Best Place to Watch a Movie!'

Additional information is available on the company's website at www.REGmovies.com.

Spider-Man: No Way Home swings into Regal with second biggest...