NEW YORK, Nov. 20, 2019 /PRNewswire/ -- Despite growing calls for gender diversity, the number of women CEOs in the S&P 500 dropped by nearly 20 percent in 2018. At the same time, corporate America took decisive action against harassment: In the S&P 500, companies ousted five CEOs in 2018 due to #MeToo-related misconduct, representing more than 40 percent of all CEO dismissals. 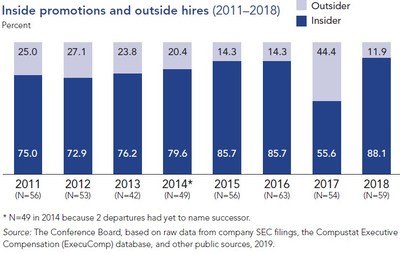 The findings come from a new report published by The Conference Board, supported by Heidrick & Struggles. The study examines CEO succession events announced in the S&P 500 in 2018, comparing historical data that The Conference Board has been collecting since 2001.

Key findings from the new report include:

"With the rise in CEO departures and as the CEO role continues to evolve, we've continued to see the need for boards to proactively plan for a range of scenarios and to make succession planning a high priority," said Jeff Sanders, Vice Chairman and Co-Managing Partner of the CEO & Board Practice, Heidrick & Struggles.

"While the number of women CEOs has increased significantly since the report began –  reaching their highest levels in 2017 – the trend has suddenly reversed with the number of women CEOs dropping to pre-2016 levels," said Bonnie Gwin, Vice Chairman and Co-Managing Partner of the CEO & Board Practice, Heidrick & Struggles. "As companies increasingly look inward for their next CEO, companies must do more earlier to develop and train high-potential women leaders and add them to their CEO-ready lists."

"The rate of succession among older chief executives continues to climb, and there are still more CEOs aged 75 and over than there are CEOs under the age of 45," said Matteo Tonello, Managing Director of ESG Research at The Conference Board's ESG Center and the principal author of the report. "In the coming months and years, a softening economic environment may very well unfold. Boards should be prepared, given a slowdown would likely spur an acceleration of CEO retirements and tightening of the market for top talent."

"A buoyant market environment and quality leadership development programs are likely key contributing factors to the lengthening of CEO tenure and the overwhelming elevation of insiders to the CEO position," said Jason Schloetzer, Associate Professor of Business Administration at Georgetown University's McDonough School of Business and a co-author of the report.

Media can contact The Conference Board for a copy of the full report.

The Conference Board Leading Economic Index® (LEI) for the U.S....