WASHINGTON, Dec. 10, 2019 /PRNewswire/ -- Horatio Alger Association of Distinguished Americans, Inc., a nonprofit educational organization honoring the achievements of outstanding individuals and encouraging youth to pursue their dreams through higher education, today announced that Robert A. McDonald, 8th Secretary of the Department of Veterans Affairs and Retired Chairman, President and CEO of The Procter & Gamble Company, has been selected for membership in this prestigious organization. Mr. McDonald joins 13 other exceptional business, civic and cultural leaders from across North America in receiving 2020 honors. For more than 70 years, the Horatio Alger Award has been annually bestowed upon esteemed individuals who have succeeded despite facing adversities, and who have remained committed to higher education and charitable efforts in their communities.

Born in the steel country of Gary, Indiana, Mr. McDonald learned grit from a young age. He witnessed how hard his parents worked to provide for their family. Their small family home was located across from the Calumet River and the U. S. Steel Mill. His father and mother were active teaching values in his life, playing leadership roles in church and Sunday school, Scouting, and Little League.  His father served in the Army Air Corps in the occupation forces in Japan.  He attended college on the GI Bill. Inspired by his father's service, Mr. McDonald always knew he wanted to serve in the military. He was accepted into the U.S. Military Academy and graduated in the top 2% of his class in 1975 with a degree in engineering. He went on to serve as an Airborne Ranger Infantry Officer, leading paratroopers in the 82nd Airborne Division's 504th Airborne Infantry. He was awarded the Meritorious Service Medal upon his honorable discharge.

After five years in the military, Mr. McDonald was recruited by powerhouse consumer goods corporation Procter & Gamble. There, he dedicated 33 years of his life serving in various roles and many locations (U. S., Canada, Philippines, Japan, and Belgium), eventually climbing the corporate ladder to CEO and chairman of the board. In 2014, President Obama nominated Mr. McDonald to the Cabinet position of U.S. Secretary of Veterans Affairs. His appointment was unanimously confirmed, and he served in the role until January 2017. Currently, Mr. McDonald serves on several boards that align with his deep commitment to values-based leadership and improving and advancing the lives of active-duty military, veterans and military families.

"Through his selfless service to our country and the way in which he expertly led Procter & Gamble through decades of immense growth and change, Robert McDonald embodies the values that define our organization," said Terrence J. Giroux, executive director, Horatio Alger Association. "In addition to this, he and his wife have a decorated history of philanthropy and I know he will become an active and involved Member upon his induction in April."

Mr. McDonald is intimately involved in many organizations that support military and veteran affairs. He and his wife, Diane, are members of the U.S. Military Academy Association of Graduates' Dwight D. Eisenhower Lifetime Giving Society, to which he has donated more than $5 million. As a proud alumnus of West Point, Mr. McDonald is a Five-Star Level Cullum Society Member, which acknowledges and celebrates his commitment to donating a percentage of his net worth upon his death. Additionally, he serves as a Director of the Board of the Association of Graduates of West Point. He and his wife founded West Point's McDonald Conference for Leaders of Character (MCLC) with a $3 million gift and served on the Academy's "For Us All" campaign cabinet, which raised more than $460 million. Last April, Mr. McDonald and his wife donated a statue of President and West Point graduate, Ulysses S. Grant. Mr. McDonald also pledged to donate his brain to the Veterans Affairs Brain Bank to advance VA research about post-traumatic stress disorder.

"I am humbled to receive such a prestigious Award from an organization that I respect so deeply," said Mr. McDonald. "To be joining the ranks of Horatio Alger's impressive list of Members is a true honor, but I am most looking forward to meeting the outstanding students the Association supports. I know hard work, but I also know hardship – and they do, too. I hope my story can inspire them to push through life's challenges to chase their dreams."

Thanks to the generosity of its Members, the Association awards need-based scholarships to outstanding high school students who are committed to pursuing higher education and giving back to their communities. The Association also educates young people about the limitless opportunities afforded to them by the free-enterprise system through hard work, honesty and determination. Like Association Members, Horatio Alger Scholars have faced significant adversities, but have also displayed unmatched resilience in overcoming their challenges. Since the scholarship program was established in 1984, the Horatio Alger Association has provided more than $180 million to 27,000 students in need, all of which has been funded solely through the generosity of Association Members and friends.

Mr. McDonald and the Member Class of 2020 will be formally inducted into the Association on April 2-4, 2020, during the Association's 73rd Horatio Alger Award Induction Ceremonies in Washington, D.C. The annual three-day event honors the achievements of both Members and National Scholars, affording both groups the opportunity to meet and interact as well as exchange stories of hardships and triumphs.

About Horatio Alger Association of Distinguished Americans: Founded in 1947, the Horatio Alger Association of Distinguished Americans, Inc. is dedicated to the simple but powerful belief that hard work, honesty and determination can conquer all obstacles. The Association honors the achievements of outstanding leaders who have accomplished remarkable successes in spite of adversity by bestowing upon them the Horatio Alger Award and inducting them as lifetime Members. Horatio Alger Members support promising young people with the resources and confidence needed to overcome adversity in pursuit of their dreams through higher education. Through the generosity of its Members and friends, in 2019, the Association awarded more than $21 million in undergraduate and graduate need-based scholarships to 2,500 students across the United States and Canada, and provided college support and mentoring services to its Scholars. Since 1984, the Association has awarded more than $180 million in college scholarships to more than 27,000 deserving students. For more information, please visit www.horatioalger.org. 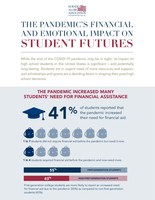 Half of Students Not Attending College This Fall Would Have...