MACAO, Nov. 20, 2017 /PRNewswire/ -- Sands China Ltd. celebrated the 10th anniversary of The Venetian® Macao Monday, highlighted by a ceremony at the outdoor lagoon of the iconic integrated resort.

Opened on Aug. 28, 2007, with great expectations for its success, the company's anchor property on the Cotai Strip quickly became a must-see landmark destination that redefined the Cotai skyline, where it still draws in millions of visitors from around the world 10 years later. 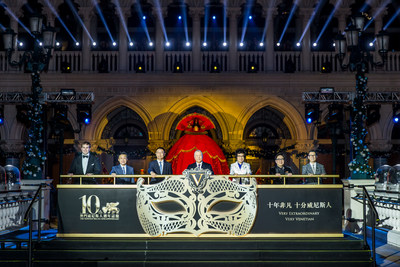 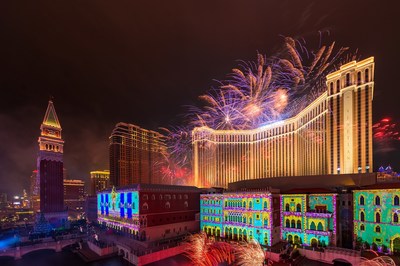 With a vision to establish a world-class business, leisure and family destination on the Cotai Strip, Chairman and CEO of Las Vegas Sands Corp. and Sands China Ltd. Sheldon G. Adelson brought his successful integrated resort model to Macao with the launch of The Venetian Macao – a move that was seen as a risky venture by many, but one that has stood the test of time. Ten years on, The Venetian Macao has been joined by three interconnected sister resorts – The Plaza™ Macao, Sands® Cotai Central, and The Parisian Macao – forming an integrated resort city on Cotai attracting nearly half a billion visitors over the last 10 years.

With The Venetian Macao leading the way, Sands China continues its long-held strategy of offering a diversified mix of attractions and services to its visitors – nearly 13,000 hotel rooms and suites, 140 dining options, the region's premier meetings and conventions destination, more than 850 duty-free shops, and the biggest names in entertainment – in line with the Macao government's push to develop Macao into a world centre of tourism and leisure while diversifying the city's tourism economy.

"This property has a very special place in my heart," said Mr. Adelson. "It was my wife, Miriam, who first had the inspiration to recreate Venice in Las Vegas, and opening The Venetian Macao in 2007 marked the beginning of my vision for the Cotai Strip. Nothing is more fulfilling to an entrepreneur than to see a vision turned into reality. For me, The Venetian Macao represents exactly that – first a vision and then a reality. I'm extremely grateful to every person who helped bring this reality to life and I'm humbled by the dedication and support we're still receiving 10 years later."

Dr. Wilfred Wong, president of Sands China Ltd., said: "Sands China is so grateful to the Macao government, to the local community, and to our team members as we commemorate this important milestone for The Venetian Macao, for our company, and for Macao. It is our honour and pleasure to serve and operate in this vibrant community, and it is our hope to continue to grow with Macao and work in tandem with the Macao government to further support Macao's transformation into a world centre of tourism and leisure."

Dr. Wong attended the main ceremony at the lagoon Monday evening, along with government dignitaries and celebrities, where they enjoyed a masquerade grand parade featuring music and dancing, a light and sound 3-D mapping spectacular projected on the façade of The Venetian Macao, and a pyrotechnic show. A gala dinner followed, featuring entertainment headlined by Cantopop superstar Joey Yung.

Monday's celebration had originally been scheduled to take place on The Venetian's Aug. 28 anniversary date. Sands China decided to postpone the event in light of the needs of the Macao community in the aftermath of Typhoon Hato. In the wake of the natural disaster, Sands China was heartened to see that, following the lead of the Macao government, the company came together as one team – from rank-and-file team members to management – to lend its support and its resources to the people of Macao. After Macao had made significant progress in its recovery, the company then rescheduled the 10th anniversary event to its new date.

Sands China Ltd. (HKEx: 1928, Sands China or the Company) is a Cayman Islands registered company and is listed on The Stock Exchange of Hong Kong Limited. Sands China is the largest operator of integrated resorts in Macao. The Company's Cotai Strip portfolio is comprised of The Venetian® Macao, The Plaza™ Macao, Sands® Cotai Central and The Parisian Macao. The Company also owns and operates Sands® Macao on the Macao peninsula. The Company's integrated resorts contain a diversified mix of leisure and business attractions and transportation operations, including large meeting and convention facilities; a wide range of restaurants; shopping malls; world-class entertainment at the Cotai Arena, The Venetian Theatre, The Parisian Theatre and the Sands Cotai Theatre; and a high-speed Cotai Water Jet ferry service between Hong Kong and Macao. The Company's Cotai Strip portfolio has the goal of contributing to Macao's transformation into a world centre of tourism and leisure. Sands China is a subsidiary of global resort developer Las Vegas Sands Corp. ( NYSE: LVS).