NEW YORK, April 7, 2021 /PRNewswire/ -- SERHANT., a multidimensional real estate brokerage that sits at the intersection of media, entertainment, education and technology, today reported it is consistently averaging $100 million in sales volume per month for its first six months of business. Founded in September 2020 by Ryan Serhant, seasoned real estate broker and star of Bravo's two-time Emmy-nominated Million Dollar Listing New York, the eponymous firm has since doubled in size, signed eight new development projects, and represented clients in record-breaking transactions, including the sale of a $132 million estate in Palm Beach, FL, a $33 million penthouse in Miami, FL, and a $22.5 million penthouse in New York City's SoHo neighborhood.

"Our sales activity is better than I ever could have anticipated and I'm so incredibly proud of our amazing team and all we have accomplished together in our first six months as a company," said Ryan Serhant, founder and CEO of SERHANT.  "Starting a business in the middle of a pandemic might seem counter-intuitive, but we were confident in what we built and that we were filling a need in creating the brokerage of the future; the marketplace is validating our vision."

Exponential Growth and Industry LeadershipSERHANT. has doubled in size since it opened its doors; currently, the firm has more than 30 real estate agents, over 30 employees, and its executive team is predominantly female. The company added over a dozen new agents in the month of March alone, including Nile Lundgren of Bravo's Camp Getaway, Talia McKinney, host of LISTED by SERHANT.'s 3 in a Million YouTube series, and Ashlei De Souza, host of LISTED's Staged YouTube series. To accommodate its significant headcount growth, and its vision of creating a collaborative space for its agents and clients, the company has signed a 15,000-square-foot, four-story flagship in SoHo as its new NYC headquarters, to be known as "SERHANT. House New York."

SERHANT. has averaged $100 million in sales volume every month in its first six months, making the firm's 30 agents among the most productive in the city. With one in every four deals in contract being in the luxury real estate market, the firm is on track to become one of the city's top real estate brokerages in its first year of business.

SERHANT. has represented clients in a number of notable transactions including: 535 N. County Road in Palm Beach, FL, sold for a record-breaking $132 million, the most expensive sale ever in the state of Florida and the second-most expensive home sale ever in the United States; the Arte Surfside in Miami, FL, sold for a record-breaking $33 million, the third most expensive penthouse sale in Miami in the last seven years as well as the highest price-per-square-foot ever recorded in the Surfside neighborhood; PHB at 565 Broome, sold to the same buyer as PHA, for $22.5 million; and unit 62B at One57, where Chase Landow negotiated a 17% discount for his buyer client, closing at $19.9 million.

As a thought-leader in the residential real estate industry, SERHANT. releases reports on the state of the real estate market compiled by Garrett Derderian, the firm's director of market intelligence. These include quarterly reports detailing sales activity in Manhattan, Brooklyn and Queens, and semi-annual reports covering the state of the Townhouse market as well as from the SERHANT. Signature division, detailing sales activity $10 million and above in the Manhattan and Brooklyn real estate market.

SERHANT. SignatureSERHANT. Signature is the firm's specialty division designed to serve high net worth clients and focusing on sales over $10 million; it has been among the most active divisions since the company's founding. SERHANT. Signature is currently representing 123 East 61st Street, a rare, ground-up new construction townhouse on the Upper East Side for $18.8 million; 5 East 63rd Street, a historic multi-family home on the Upper East Side for $15 million; and 230 Central Park South PH-16, a penthouse apartment with Central Park views for $13.75 million, among others.

New DevelopmentsLed by Director of New Developments Jennifer Alese, the SERHANT. New Development division has also been active, signing eight projects since September, three of which are towers that are yet-to-be-announced.  Shortly after its founding, the company was tapped for the sales and marketing of Brooklyn Point, a 68-story mixed-use condominium tower by Extell Development Company located in Downtown Brooklyn; SERHANT. went on to sign eight deals at the property in a three-week timeframe and has since maintained sales momentum having closed out the month of March with 21 new deals signed at the building. SERHANT. New Development is also managing sales and marketing for 61 Rivington, a boutique library conversion on the Lower East Side by Horizon Group, and leasing for 11 Greene, a 31-unit loft building in the heart of SoHo by Arch Companies.

The division has grown its educational offerings with the addition of Ryan Mojo, a former Tom Ferry coaching leader, as Senior Program Manager of Coaching and Mentorship overseeing the Sell It Like Serhant (SLS) Pro mentorship program. The SLS program currently comprises nearly 7,000 agents across 109 countries and is continuing to grow at a significant rate. In February, Serhant introduced his confidence blueprint into the Sell It Like Serhant educational system with the publication of his second book, and international best-seller, Big Money Energy; the team has since launched an iHeartRadio Original Podcast based on the book called "Big Money Energy with Ryan Serhant."

SERHANT. StudiosSERHANT. Studios is the firm's in-house studio and production team, managing social media and video content. It runs LISTED by SERHANT., the company's original YouTube network dedicated to entertaining lifestyle and real estate shows that are hosted by the firm's agents, offering them a platform to heighten their individual profile. The LISTED network currently has 18 episodes across its four web series — 3 in a Million, Staged, Meals in Mansions, and Borough Brokers — and has three additional shows in production.

SERHANT. is one of the most-followed real estate brands in the world, garnering over 3.6 million followers across all its social channels. Its original video content and programming has received a combined total of nearly 91 million views and generated countless referral opportunities.

The SERHANT. brokerage was built for the marketplace of tomorrow and designed to amplify the success of others — agents, employees, developers, and clients.

About SERHANT.:SERHANT. is the first real estate brokerage designed and reimagined for the marketplace of tomorrow. The company grew from the #1 ranked sales team in New York City into a full-service firm that is revolutionizing the traditional real estate model. SERHANT. is a multidimensional brokerage, made up of SERHANT. Brokerage and New Development, including SERHANT. Signature, SERHANT. Studios and SERHANT. Ventures and powered by proprietary, internally developed technologies and marketing capabilities, ADX and ID Lab. SERHANT. sits at the intersection of technology, media, entertainment and education with a commitment to amplify success for its business, brokers, employees, developers, clients, sellers, global course members and the industry as a whole. Learn more at https://www.serhant.com. 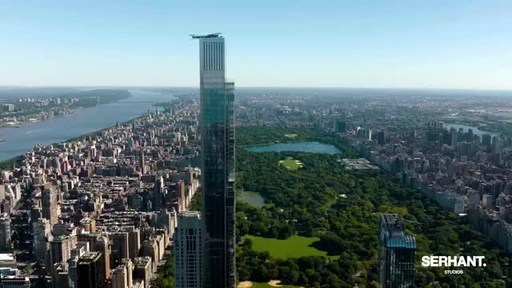