LOS ANGELES and SAN JUAN, Puerto Rico, Feb. 15, 2018 /PRNewswire/ --  sonnen, the global market leader in intelligent residential energy storage, today announced the commissioning of a solar + battery storage microgrid at S.U. Matrullas, a K through 9 school that educates over 150 students in the remote town of Orocovis, Puerto Rico. The microgrid, established in collaboration with sonnen's local energy partner Pura Energía, serves as a model for the resiliency created by solar + storage technologies, as it represents a fully off-grid site deep in the mountains of Puerto Rico. 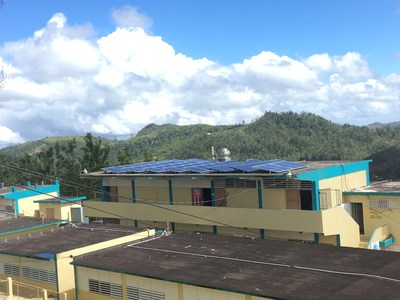 The school has been completely off-grid since Hurricane Maria and is not expected to have power for many months to come. sonnen has donated two smart energy storage systems, an eco 8 (4kW / 8kWh) and eco 14 (8kW / 14kWh), to be paired with a 15kW rooftop solar system provided by Pura Energía. The microgrid will provide enough energy to keep the school open, enabling the facility to use clean and renewable energy to keep classes going instead of relying on a noisy, gas fueled generator. During sonnen's most recent visit to the site in February, students were using the sonnen system to charge their laptops for an upcoming technology lesson.

Orocovis is known for its breathtaking beauty and is one of the highest peaks in Puerto Rico, with the ocean visible on both the north and south shores of the island. However, the remote area is difficult to reach due to road and bridge wash-outs along the single-lane road that winds throughout the mountains. With the installation of the microgrid, S.U. Matrullas currently does not plan to reconnect with the Puerto Rico Electric Power Authority (PREPA), even once power is restored to the area. Further, the school will soon be off-water, as Por Los Nuestros – an organization with ties to local TV star Jay Fonseca as well as Manuel Cidre and others in the private sector – has helped facilitate recovery efforts and plans to donate a water collection and filtration system to bring the school to 100% sustainability.

S.U. Matrullas is the site of the ninth and tenth microgrid systems that sonnen and Pura Energía have installed on the island since Hurricane Maria struck in September 2017. Other microgrids have included community and relief centers, washing machines and laundromats, food distribution centers and a school for behaviorally challenged children in Aguadilla. All efforts and technology were donated by sonnen and Pura Energía via the del Sol Foundation for Energy Security, thus far exceeding $350,000.

"We have witnessed first-hand not only a collaborative humanitarian effort that has aided critical recovery efforts in Puerto Rico, but one that has fostered forward-thinking strategies leveraging an integrated renewable energy capable of providing power to a large group of people," said Adam Gentner, sonnen's Director of Business Development, Latin American Expansion. "These microgrids effectively form the blueprint for more than just recovery, but for preparation for islands and regions around the world that are susceptible to natural disasters and power outages. As sonnen continues its global expansion, we will maintain our focus on bringing clean and affordable energy to all."

About sonnenAt sonnen, we believe clean, affordable, and reliable energy for all is one of the greatest challenges of our time. sonnen is a proven global leader in intelligent energy management solutions that provide greater energy control for residential customers through increased solar self-consumption, reduced peak energy usage and reliable backup power during outages – contributing to a cleaner and more reliable energy future. sonnen has won several awards for its energy innovations, including the 2017 Zayed Future Energy Prize, MIT's Technology Review's 50 Smartest Companies in 2016, Global Cleantech 100 for 2015-2017, Greentech Media's 2016 Grid Edge Award for innovation, and Cleantech's 2015 Company of the Year Award in both Israel and Europe.