The projects receiving funding were proposed during the SU2C Scientific Summit in late January in Santa Monica, California, and were selected "on the spot" by a board of experts, based on 250-word preliminary proposals. These tentative selections were subjected to a more thorough review and have now been fully approved by SU2C.

"The Sharp Awards process, from selection through approval and funding, takes only a few weeks, which is the speed of light in the world of scientific research," said William G. Nelson, MD, PhD, director, Sidney Kimmel Comprehensive Cancer Center at Johns Hopkins in Baltimore, who serves as vice chair of the SU2C Scientific Advisory and oversees selection of the Sharp Awards. "The grants will bring our researchers even closer together and capitalize on synergies among their work."

The SU2C Phillip A. Sharp Innovation in Collaboration Awards are named after Sharp, the institute professor at the Massachusetts Institute of Technology (MIT) and its Koch Institute for Integrated Cancer Research, and chair of the SU2C Scientific Advisory Committee, to honor the emphasis he has placed on collaboration among researchers.

In selecting the winning projects, the committee placed particular emphasis on projects that involved SU2C researchers who have not worked together in the past, including collaborations between members of Dream Teams, Research Teams, and Convergence Teams, and between team members and recipients of SU2C's Innovative Research Grants, who are early-career investigators.

"One of SU2C's great accomplishments has been to kick down the silos that we cancer researchers tend to work in," said Sharp, who received the Nobel Prize for Medicine or Physiology in 1993 for the discovery that genes can be discontinuous. "We emphasize collaboration among researchers at different institutions, with different skill sets. These awards take the level of collaboration to a higher plane."

The awards include researchers who are members of four Dream Teams, two Research Teams, and five Convergence Teams; two IRG recipients; and one recipient of an SU2C Catalyst® grant. They work in three countries: the United States, Canada, and the Netherlands.  Each team will receive $250,000.

The total amount awarded includes a grant of $250,000 from the C4C Fund, a family foundation, specifically designated for metastatic colorectal cancer research. An additional grant of $250,000, provided by the Emily Whitehead Foundation, is contributing $125,000 to support one 2018 Sharp Award, and $125,000 to support one Sharp Award in 2019, both focused on pediatric cancer.

"We are honored to collaborate with SU2C and fund these amazing researchers so they can further study pediatric cancer immunotherapy treatments," said Tom Whitehead, co-founder of the Emily Whitehead Foundation. "Our hope is to pay it forward and support the development of successful, less toxic treatments that will give more kids the chance to not only survive their cancer but also lead healthy and happy lives."

The 2018 Sharp Awards recipients are:

About Stand Up To Cancer Stand Up To Cancer (SU2C) raises funds to accelerate the pace of research to get new therapies to patients quickly and save lives now. SU2C, a division of the Entertainment Industry Foundation (EIF), a 501(c)(3) charitable organization, was established in 2008 by film and media leaders who utilize the industry's resources to engage the public in supporting a new, collaborative model of cancer research, and to increase awareness about cancer prevention as well as progress being made in the fight against the disease. As SU2C's scientific partner, the American Association for Cancer Research (AACR) and a Scientific Advisory Committee led by Nobel Laureate Phillip A. Sharp, PhD, conduct rigorous, competitive review processes to identify the best research proposals to recommend for funding, oversee grants administration, and provide expert review of research progress.

For more information on Stand Up To Cancer, visit www.StandUpToCancer.org.

About the American Association for Cancer ResearchFounded in 1907, the American Association for Cancer Research (AACR) is the world's first and largest professional organization dedicated to advancing cancer research and its mission to prevent and cure cancer. AACR membership includes 40,000 laboratory, translational, and clinical researchers; population scientists; other health care professionals; and patient advocates residing in 120 countries. The AACR marshals the full spectrum of expertise of the cancer community to accelerate progress in the prevention, biology, diagnosis, and treatment of cancer by annually convening more than 30 conferences and educational workshops, the largest of which is the AACR Annual Meeting with more than 21,900 attendees. In addition, the AACR publishes eight prestigious, peer-reviewed scientific journals and a magazine for cancer survivors, patients, and their caregivers. The AACR funds meritorious research directly as well as in cooperation with numerous cancer organizations. As the Scientific Partner of Stand Up To Cancer, the AACR provides expert peer review, grants administration, and scientific oversight of team science and individual investigator grants in cancer research that have the potential for near-term patient benefit. The AACR actively communicates with legislators and other policymakers about the value of cancer research and related biomedical science in saving lives from cancer. For more information about the AACR, visit www.AACR.org.

STAND UP TO CANCER LAUNCHES NEW RADIO PSA WITH JAZZ... 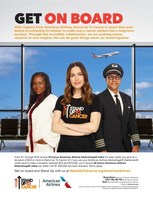