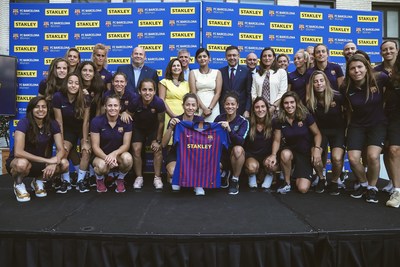 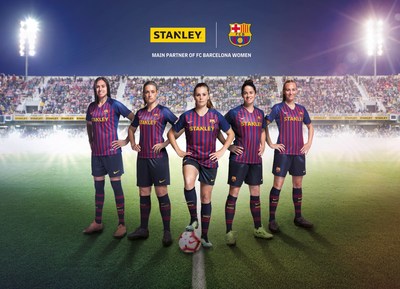 This first-of-its-kind jersey sponsorship for the Barca's Women's team has set a new standard in the commercialization of women's sports, one which will further fuel the growth of women's sports around the world.

FC Barcelona Femeni is home to some of the most successful players in women's soccer, including Lieke Martens who won The Best FIFA Women's Player in 2017, Andressa Alves who helped Brazil win the 2018 Copa America Femenina, and Toni Duggan who has won several 'Female Player of the Year' awards, to highlight a few examples. In the 2017-18 season, Barca Women claimed the Copa de la Reina title, winning their fifth title in the last eight seasons, a feat only two other clubs have been able to accomplish.

This partnership also recognizes the growth and value of women's soccer and female sports fans. Women are increasingly engaging around sports on social media. A recent study from Adweek shows women account for 30% of all sports-focused social engagement in the U.S., and soccer is in the top three sports they engage with on these platforms.

The announcement and new match jersey were unveiled at an event held at the Beverly Wilshire Hotel in Los Angeles the day before the Women's team plays its first preseason match vs. SoCal at Drake Stadium on July 28, which will then be followed by the Men's first team taking on Tottenham Hotspur at the Rose Bowl. The U.S. represents a key strategic focus area for both FC Barcelona and the STANLEY brand, which is why the announcement took place during FC Barcelona's  2018 U.S. Tour. In addition to FC Barcelona President, Josep Maria Bartomeu and Stanley Black & Decker executive Pradheepa Raman, the event was attended by FC Barcelona CEO, Oscar Grau, Vice Chairman, Jordi Mestre and Vice Secretary, Maria Teixidor; as well as other key Stanley Black & Decker executives, including Chief Communications Officer, Shannon LaPierre, and Global Director of Marketing, Strategy and Analysis, Earle Smola; and esteemed guests and media.

Stanley Black & Decker has been a Global Partner of the FC Barcelona's Men's team since the 2014/15 season, activating that partnership across 60+ countries with digital, marketing and merchandising rights, and access to once-in-a-lifetime Barca experiences.

In the 2017-18 season, Barca announced STANLEY as an official partner of the club's Women's team. The deal provided STANLEY with exclusive access to the Women's team, and the brand collaborated with Barca to create a compelling digital content series allowing fans of the Women's team to get closer to the sport and players.

"STANLEY is a company that shares our commitment to supporting women and women's sports around the world. The expansion of its pledge to our Women's team is historic because it's the first time that it has had its own exclusive sponsor, and I am sure this will benefit women's sports worldwide. Together, we are making positive changes that will help to break down the barriers surrounding women's sports. There is still a long way to go and STANLEY is the right partner to join us on that journey."

"We are thrilled to be the first-ever shirt sponsor for the FC Barcelona Women's team and expand our relationship with one of the most well-respected and followed sports organizations in the world. This is an historic and unique opportunity that aligns with our efforts to build a more inclusive and diverse organization and empower women worldwide."

FC Barcelona was founded 118 years ago in 1899, and is unique in many ways. The club is owned by its more than 145,000 members and can boast of being the most successful club in Europe over the last years. Since season 2004/05 they have won four of the Club's five Champions League titles and nine of their 25 domestic league titles. Due to its very special personality, 'Barça' is recognized as being 'more than a club'. The team's distinctive style of play is projected around the world by the best players and coaches of their time in combination with club's famous reliance on homegrown talent.

All of this goes hand in hand with its ongoing ambition to become the most admired, beloved and global sports institution on the planet. This mission is supported by such core principles as humility, effort, ambition, respect and team-work, while the club is also famed for its commitment to society, which is channeled through the FC Barcelona Foundation and its work to educate children through the positive values of sport. Such unstoppable growth in recent years has led to a global reach of more than 315 million fans and made FC Barcelona a world leader on social media.