CAMDEN, N.J., Oct. 16, 2020 /PRNewswire/ -- Subaru of America, Inc. and the Philadelphia Union today announced they will be donating 25,400 servings of organic fruits and vegetables to Chester, PA-area food banks over the next year. The fresh produce was grown in the automaker's and soccer team's Subaru Loves the Earth Garden for Good, the first organic garden at a Philadelphia professional sports stadium. 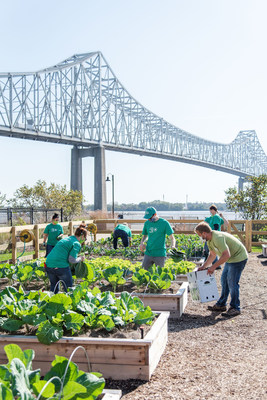 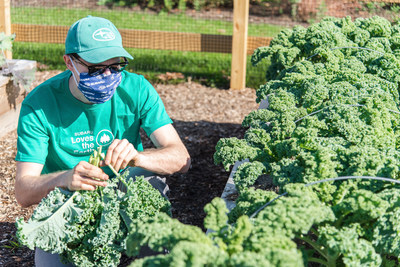 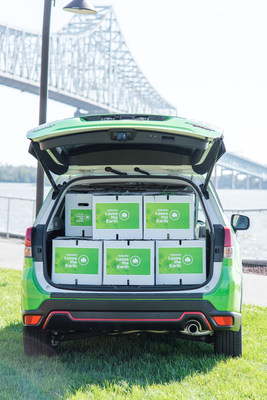 "Having access to fresh and delicious-tasting produce is vital for maintaining good health, but for many communities, fruits and vegetables are not easily accessible to residents," said Alan Bethke, Senior Vice President of Marketing, Subaru of America, Inc. "Through our Garden for Good, we're excited to help the Chester-area achieve more balanced nutrition with organic fruits and vegetables grown right in our very own garden at Subaru Park."

"From the time the partnership was announced, our vision was for Subaru Park to not only be a name, but a symbol of commitment to our community," said Tim McDermott, President, Philadelphia Union. "The Garden for Good is a large step in that vision coming to fruition by providing thousands of pounds of fresh, organic produce to the food insecure residents in our area. We are all stronger when we work together to help our neighbors."

The Philadelphia region currently ranks in the top ten U.S. cities with the highest number of food-insecure residents. Nearly 12% of households lack access to three meals a day, a number that is expected to double as a result of the COVID-19 pandemic. Many food pantries have experienced as much as a 50% increase in demand since the start of the pandemic, heightening the need for broad collective action.

The Garden for Good at Subaru Park, which is maintained by the Pennsylvania Horticultural Society and Subaru employee volunteers, is Chester's first sustainable and organic garden. This project is part of PHS's Harvest 2020, an initiative to combat local food insecurity during the pandemic. Harvest 2020, which was created in May 2020, brings together thousands of local gardeners and a collection of public gardens to grow and share food for families in need alongside of providing supplies and resources for people in underserved communities to grow food for themselves and their neighbors. During harvesting seasons, Subaru volunteers and PHS harvest produce every two weeks with a goal of producing 4,200 pounds of produce each year. The garden is intended to provide fresh fruits and vegetables for donation to food banks in Chester.

"The goal of PHS's partnership with Subaru and The Philadelphia Union is to maintain, grow and harvest vegetables that can help combat food insecurity in the region," said Andrew Bunting, PHS Vice President of Public Horticulture. "PHS understands that growing produce is one way to achieve our vision of increasing access to fresh, heathy food to our neighbors. We are thrilled to be able to support our local community food banks during this unprecedented time."

"We are seeing a dramatic increase—up to 60% more—of people accessing the charitable food network and unable to feed their families," explained Philabundance CEO, Loree D. Jones. "Collaborative initiatives like Garden for Good truly make an impact on our neighbors in need by providing fresh, locally grown produce they may not have been able to afford otherwise."

Subaru and the Union teamed up in February to embark on a multi-year stadium naming rights partnership that gave the name Subaru Park to the 18,500-seat sports and events destination and home of the Union. The two organizations are committed to supporting the greater Philadelphia community with charitable programs, including the Subaru Loves the Earth Garden for Good announced today, as an extension of the Subaru Love Promise vision. The pairing's other endeavors include the Dogs of Ben, an initiative aimed at helping shelter dogs find homes in the Philadelphia area.

About Subaru of America, Inc.  Subaru of America, Inc. (SOA) is a wholly owned subsidiary of Subaru Corporation of Japan. Headquartered at a zero-landfill office in Camden, N.J., the company markets and distributes Subaru vehicles, parts and accessories through a network of more than 630 retailers across the United States. All Subaru products are manufactured in zero-landfill production plants and Subaru of Indiana Automotive, Inc. is the only U.S. automobile production plant to be designated a backyard wildlife habitat by the National Wildlife Federation. SOA is guided by the Subaru Love Promise, which is the company's vision to show love and respect to everyone, and to support its communities and customers nationwide. Over the past 20 years, SOA has donated more than $190 million to causes the Subaru family cares about, and its employees have logged more than 40,000 volunteer hours. As a company, Subaru believes it is important to do its part in making a positive impact in the world because it is the right thing to do.

About Philadelphia UnionThe Philadelphia Union is an innovative, forward-thinking professional soccer club competing in Major League Soccer (MLS) and one of Philadelphia's five major league sports teams. Driven by unprecedented fan support, MLS awarded the Philadelphia expansion franchise rights to Jay Sugarman in 2008 and the Union kicked off its inaugural season in 2010. The club has reached the finals of the Lamar Hunt U.S. Open Cup in 2014, 2015 and 2018, and has appeared in the MLS Cup Playoffs in 2011, 2016, 2018 and 2019.

The Union play at Subaru Park in Chester, PA on the banks of the Delaware River. The custom-built stadium is part of the Union's unique waterfront campus, featuring a historic power plant rebuilt into a 400,000 sq. ft. creative office building, a state-of-the-art Training Complex, over seven acres of professional-grade practice pitches and multiple onsite parking fields. For more information about the Philadelphia Union, visit www.philadelphiaunion.com and follow @PhilaUnion on Twitter or Instagram.

About Pennsylvania Horticultural SocietyThe Pennsylvania Horticultural Society, an internationally recognized nonprofit organization founded in 1827, plays an essential role in the vitality of the Philadelphia region by creating healthier living environments, increasing access to fresh food, growing economic opportunity, and building deeper social connections between people. PHS delivers this impact through comprehensive greening and engagement initiatives in more than 250 neighborhoods; an expansive network of public gardens and landscapes; year-round learning experiences; and the nation's signature gardening event, the Philadelphia Flower Show. PHS provides everyone with opportunities to garden for the greater good as a participant, member, donor, or volunteer. For information and to support this work, please visit phsonline.org.

Subaru Share the Love® Event Takes On 2020 For Its Thirteenth...