WASHINGTON, May 1, 2019 /PRNewswire/ -- Most Americans harbor positive views about mental health disorders and treatment, according to the results of a survey released today, in recognition of mental health month.  The survey was conducted by The Harris Poll on behalf of the American Psychological Association. 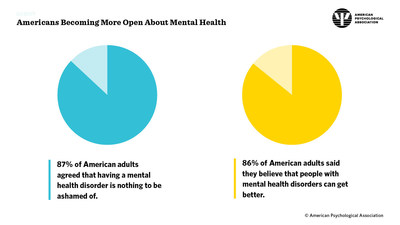 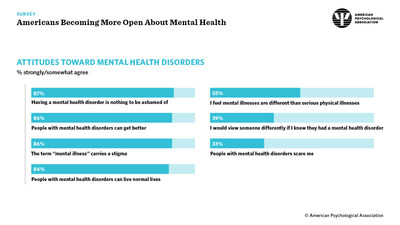 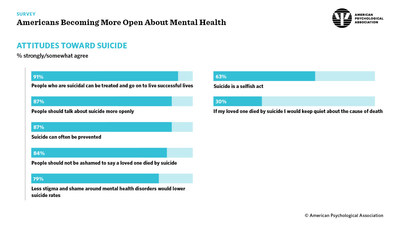 "The results of this survey are encouraging, and a signal that APA's and others' work over the years to promote mental health care is paying off," said APA CEO Arthur C. Evans Jr., PhD. "They indicate a willingness to be more open about mental illness, as well as a strong belief among older respondents that having a mental disorder is nothing to be ashamed of."

Notably, significant minorities of Americans do not consider the most common mental health disorders to be disorders. A third (33%) said they did not consider anxiety to be a mental illness, and 22% said the same about depression.

The survey also delved into attitudes about suicide. Large majorities of Americans agree that people who are suicidal can be treated and go on to live successful lives (91%) and that suicide can often be prevented (87%). Most also supported openness around suicide, with 87% agreeing that people should talk about suicide more openly, and 84% agreeing that people should not be ashamed to say a loved one died by suicide. Nearly 4 out of 5 (79%) agreed that less stigma and shame around mental health disorders would lower suicide rates.

However, 30% of people said that they would keep quiet about the cause of death if their own loved one died by suicide, and 63% agreed with the notion that suicide is a selfish act.

"More young adults reported feeling shame and stigma surrounding mental health issues than their older peers," Evans said. "This points to the need for psychology to continue to educate the public so that more people understand that there is no shame associated with being mentally ill."

The survey of 1,006 U.S. adults was conducted by The Harris Poll between Nov. 20-29, 2018. Respondents took a 15-minute online survey about their attitudes toward mental health disorders and mental health treatment. The results were weighted by education, age, gender, race, ethnicity, geography, household income, household size and marital status to represent the U.S. population.

The American Psychological Association, in Washington, D.C., is the largest scientific and professional organization representing psychology in the United States. APA's membership includes nearly 118,400 researchers, educators, clinicians, consultants and students. Through its divisions in 54 subfields of psychology and affiliations with 60 state, territorial and Canadian provincial associations, APA works to promote the advancement, communication and application of psychological science and knowledge to benefit society and improve lives.