NEW YORK, May 16, 2019 /PRNewswire/ -- Recently, several new federal legislative proposals regarding surprise billing have been filed and scheduled for congressional hearings, and more are expected. In that context, FAIR Health decided it would be useful to reissue its brief on the implications of various legislative choices related to surprise billing on the state and federal level. Entitled Teasing Apart the Threads to the Surprise Billing Debate: Understanding Policy Choices through the Lens of Independent Data, the brief is based on FAIR Health's experience serving all stakeholders and policy makers as a neutral expert on the issue. FAIR Health is a national, independent, nonprofit organization dedicated to bringing transparency and integrity to healthcare costs and health insurance information.

Since many policy makers are looking to New York State's surprise billing law as a successful model, FAIR Health's brief is especially important in clarifying the independent dispute resolution (IDR) provision in that law. New York's IDR system for determining the amount a payor is to pay a provider for a surprise out-of-network service often is referred to as "baseball arbitration." However, descriptions of the New York law often fail to explain how the dispute resolution entity is expressly mandated to consider specific relevant factors before making its decision in favor of one party or the other. For example, this reissued brief explains (on page 17) how the arbitrator is required to take into account, among other key factors, the "Usual and Customary Cost" for the service, determined by law and regulation to be a designated percentile for the specific service in the geographic area where the service was rendered, as reported by an independent database "unaffiliated with any insurer."

In addition to discussing IDR, with or without articulated guidelines for reimbursement, the brief discusses the option of mandating a value for reimbursement based on a clear benchmark, and details the four types of benchmark generally proposed:

The brief also considers the value of making reference to an independent, objective database in designing legislative solutions. Data visualizations in the brief illustrate the differing cost implications of the varying approaches under consideration by federal and state policy makers. The visualizations compare different types of value, such as median charges and median allowed as well as Medicare fees, for different medical procedure codes in different states and local areas.

FAIR Health President Robin Gelburd stated: "Already a pressing issue in many states, surprise billing is becoming increasingly prominent in legislation at the federal level. FAIR Health takes no position on the specifics of proposed solutions, but aims to clarify the implications of those solutions."

FAIR Health is a national, independent, nonprofit organization dedicated to bringing transparency to healthcare costs and health insurance information through data products, consumer resources and health systems research support. FAIR Health possesses the nation's largest collection of private healthcare claims data, which includes over 28 billion claim records contributed by payors and administrators who insure or process claims for private insurance plans covering more than 150 million individuals. FAIR Health licenses its privately billed data and data products—including benchmark modules, data visualizations, custom analytics, episodes of care analytics and market indices—to commercial insurers and self-insurers, employers, providers, hospitals and healthcare systems, government agencies, researchers and others. Certified by the Centers for Medicare & Medicaid Services (CMS) as a national Qualified Entity, FAIR Health also receives data representing the experience of all individuals enrolled in traditional Medicare Parts A, B and D; FAIR Health houses data on Medicare Advantage enrollees in its private claims data repository. FAIR Health can produce insightful analytic reports and data products based on combined Medicare and commercial claims data for government, providers, payors and other authorized users. FAIR Health's systems for processing and storing protected health information have earned HITRUST CSF certification and achieved AICPA SOC 2 compliance by meeting the rigorous data security requirements of these standards. As a testament to the reliability and objectivity of FAIR Health data, the data have been incorporated in statutes and regulations around the country and designated as the official, neutral data source for a variety of state health programs, including workers' compensation and personal injury protection (PIP) programs. FAIR Health data serve as an official reference point in support of certain state balance billing laws that protect consumers against bills for surprise out-of-network and emergency services. FAIR Health also uses its database to power a free consumer website available in English and Spanish and an English/Spanish mobile app, which enable consumers to estimate and plan for their healthcare expenditures and offer a rich educational platform on health insurance. The website has been honored by the White House Summit on Smart Disclosure, the Agency for Healthcare Research and Quality (AHRQ), URAC, the eHealthcare Leadership Awards, appPicker, Employee Benefit News and Kiplinger's Personal Finance. FAIR Health also is named a top resource for patients in Elisabeth Rosenthal's book, An American Sickness: How Healthcare Became Big Business and How You Can Take It Back. For more information on FAIR Health, visit fairhealth.org. 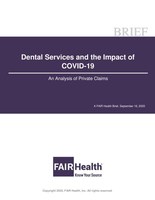