LOS ANGELES, Sept. 20, 2020 /PRNewswire/ -- The following is a statement from Julie Opperman, Chairman of The Dwight D. Opperman Foundation. 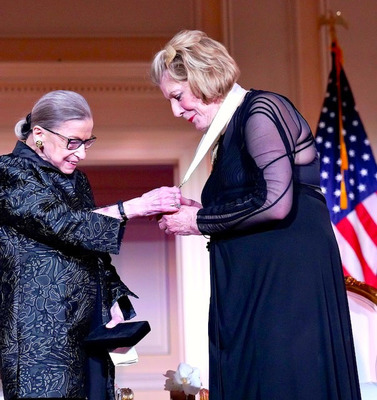 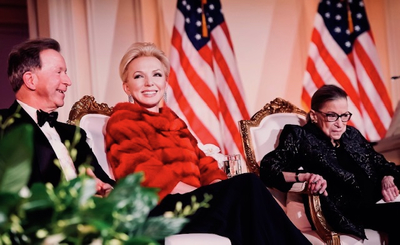 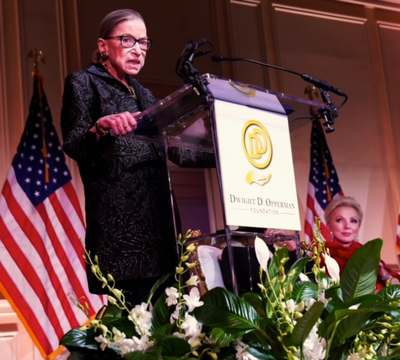 On March 15, 2019, I walked up the majestic steps of the Supreme Court of the United States to visit with Justice Ruth Bader Ginsburg in her chambers on her 86th birthday.  The Justice wanted to talk about something very important—her legacy.  Robert Newlen accompanied me.  We were greeted by her welcoming staff in an office suite filled with flowers, pictures and mementos collected from a courageously lived life. Having just gone through surgery and grueling chemo, I was surprised at how well she looked and how unusually erect she stood as she came around her desk to greet us.  "I'm going to hug you," I said, and she willingly leaned in with a sly smile on her face.  Then she looked up with the eyes of a battle-weary warrior and uttered, "It was hard.  It was really really hard..." her frail voice trailing off as she added, nodding her head, "But you know...you know," referring to the cancer battle that took the life of my husband and her decades long friend, Dwight Opperman.

We took our seats and Justice Ginsburg got down to business.  She was very keen to establish the Justice Ruth Bader Ginsburg Woman of Leadership Award, her legacy award that would honor brave, strong and resilient women who have dedicated their lives to create positive change in society.  She entrusted me, through my late husband's foundation, to do it.  I wasn't sure I heard her right, so I asked her to please repeat herself, which caused the biggest laugh I heard out of her in the 14 years I've known her.  I looked over at Robert, but his poker face was of no help.

I had an understanding that something of this nature was going to be discussed and thus had developed several scenarios for this potential undertaking, but she had ideas of her own.  Justice Ginsburg proceeded to tell us that we needed a chairman and nominating committee and a selection process...she discussed the type of trailblazing women that would be honored.  I accepted my commission. The Dwight D. Opperman Foundation Executive Director Robert Newlen and my lawyers Matthew Umhofer and Brendan V. Sullivan, Jr. went to work to make it all official.

Justice Ginsburg selected Valentine's Day, February 14, 2020 as the launch date of the inaugural Justice Ruth Bader Ginsburg Woman of Leadership Award.  The ceremony and gala took place in the majestic Great Hall of the Library of Congress with 200 invited guests in attendance.  The great philanthropist and champion of justice reform, Agnes Gund, was the first RBG Award recipient.

Justice Ginsburg arrived wearing black lace gloves, a gold lamé shawl and gold sparkly shoes that garnered some 1.6 billion views.  She called me into the green room.  I brought along the RBG Award Chairman John Studzinski, and we chatted for some half an hour, causing a delay in the start of the ceremony.  She was so pleased at what was about to happen and grateful to know that her legacy would be honored in this manner.  The Justice talked about how fortunate she was to have known Dwight and to have chaired the Devitt Award twice—it being the highest honor bestowed upon an Article III federal judge in the country—created by Dwight D. Opperman 38 years ago—and to have participated in its bestowment almost every year during her nearly three decades on the bench.

Earlier, we had recorded her speech, but Justice Ginsburg insisted that she would walk and stand and deliver her speech live before the audience.  In fact, she persevered through the hour-long ceremony, the reception, and stayed for the entire dinner.  She talked with as many guests as she could—RBG Award 2021 Chairman David Rubenstein, UNICEF champion Ghada Irani, philanthropist Adrienne Arsht, Leonard and Ronald Lauder, Douglas Elliman Chairman Howard Lorber, PepsiCo's Indra Nooyi, Ford Foundation's Darren Walker, Martha Stewart, PBS chief Patricia Harrison, RBG Award coordinator JoAnn Mason, film producer Sue Kroll, and she even discussed her condition with internist Dr. Ed Share, among many others.  She was particularly entertained and delighted by the very clever closing speech delivered by Brendan V. Sullivan, Jr. Then, she went downstairs and thanked every staffer, right down to the people handing out the gift bags.  She was pleased indeed.

Almost immediately thereafter, the pandemic hit but we managed phone communications.  She was fiercely excited about the next RBG Award ceremony and said she would like to see the nomination process open up to women from all over the world and not just the United States.  We talked about the committee members and she was simply over the moon that great men and women from all walks of life were eager to be on board.  She was particularly excited about having Sylvester Stallone walk her onto the stage to the theme of Rocky—in an iconic American "champ to champ" moment.

Today, it is with a heavy heart and the weight of the responsibility of doing justice to her legacy, that all of us at the Dwight D. Opperman Foundation and the RBG Award Voting Council and Nominating Committee mourn the passing of Justice Ruth Bader Ginsburg.

The American people lost an iconic figure known around the world.  Many gain fame but few achieve RBG's legendary stature for doing good.  Her life's work could be characterized by two words—EQUAL RIGHTS.

The RBG Award 2021 Chairman David Rubenstein said, "While diminutive in size, Ruth Bader Ginsburg was a giant as a jurist and giant as a person. This country—and all countries which value equality and human rights—will miss her intellect, judgement, compassion and resolve."

Few in history have had a greater impact on so many.  Her long career as a lawyer, a judge and a Supreme Court Justice was known for its laser-like focus on achieving equal justice. Her diminutive appearance and her soft-spoken intensity underscored her achievements and elevated her to heroine stature, especially among young women around the world who found themselves fighting to be recognized in repressive regimes.

In her inaugural RBG Award speech, the Justice said, "By honoring brave, strong and resilient women, we will prompt women and men in ever-increasing numbers to help repair tears in their local communities, the nation and the world, so that the long arc of the moral universe will continue to bend toward justice."

It was my privilege to work with Justice Ginsburg during her lifetime to create an award that captures her indomitable spirit. The Justice Ruth Bader Ginsburg Woman of Leadership Award will ensure that RBG's life will remain an inspiration to women and girls throughout the nation and the world.