WASHINGTON, May 14, 2021 /PRNewswire/ -- Asian Americans, Native Hawaiians, and Pacific Islanders have shaped the history of the United States and the world at large for thousands of years, with rich heritage and cultural traditions. National parks across the country highlight the contributions of Asian Americans, Native Hawaiians, and Pacific Islanders, and visitors today continue to bring their own experiences and stories to our national parks.

The National Park Foundation (NPF) and our work in preserving history and culture in parks aims to share more comprehensive and inclusive stories that amplify the full range of experiences and voices that are woven into the fabric of the United States, including those of Asian Americans, Native Hawaiians, and Pacific Islanders. Join us in learning about some of the stories told and preserved in national parks.

In 1793, Captain James Vancouver presented King Kamehameha I with six cows and a bull, the first cattle to reach the island. Kamehameha put a kapu, or prohibition, on the animals so they would not be hunted or killed, but eventually the cattle population grew so much it became dangerous. So around 1812, Kamehameha permitted the capture of the wild cattle and slowly the beef industry began to grow, especially under the reign of Kamehameha's son, Liholiho.

Liholiho's son, Kauikeaouli, heard about vaqueros, or Mexican cowboys, and invited some to Hawaii to teach Hawaiians their methods for cattle ranching. The paniolo, the Hawaiian cowboys, quickly created a distinct culture, crafting their own culture, including styles of saddles, gear, and music. When Ikua Purdy, Archie Kaʻauʻa, and Jack Low competed in a 1908 rodeo in Wyoming, they wore hats adorned with lei pāpale, flower lei, and they defeated some of the best American cowboys on the world stage. Kahuku, now part of Hawai'i Volcanoes National Park, was one of the oldest ranches on the island, despite its remote location, rough terrain, lack of water, and volcanic eruptions. Many people in the Kaʻū district where Kahuku sits trace their ancestry to the paniolo who worked in the area.

Jun Fujita was a respected photojournalist, silent film actor, and a talented poet. Born in Nishimura, a village near Hiroshima, Japan, in 1888, he moved from Japan to Canada when he was a teenager and eventually to Chicago, Illinois. Among his many achievements, Fujita worked at the Chicago Evening Post, photographed many noteworthy individuals and significant events such as the 1929 St. Valentine's Day massacre, was a photographer for Johnson Motors, and published many poems, including poetry written in a minimalist Japanese form called tanka, in prestigious literary journals.

Fujita drew a lot of inspiration from nature. Wildflowers, forests, and different landscapes were often illuminated in his art. In 1928, Fujita and his partner Florence Carr traveled to a remote island near Ranier, Minnesota, which is now part of Voyageurs National Park, and purchased land where Fujita built a rustic one-room cabin, a place to get away from the hustle and bustle of the city. Due to racial and legal inequalities at that time, Carr, a white woman, purchased the cabin on Fujita's behalf as Minnesota state laws restricted land ownership by Asian immigrants. In addition, while Fujita and Carr were long-time partners, they could not get legally married due to anti-miscegenation laws until 1940.

The cabin that Fujita built on Rainy Lake was reminiscent of Japan's architecture. It was made of natural materials with a minimalist design and had a side entrance. Complete with floor to ceiling windows, the cabin provided Fujita with magnificent views of the lake and surrounding forest.

In 1996, Fujita's cabin was added to the National Register of Historic Places, and thanks to NPF's support, service corps members are restoring the cabin, helping to ensure that more people have the opportunity to learn about Fujita's life and his important contributions.

In 1942, the United States government forced 120,000 people of Japanese ancestry across the west coast into internment camps. Togasaki was sent to Tanforan Assembly Center to set up medical facilities to care for her community. Togasaki was moved to several different centers, including Tule Lake and Manzanar relocation centers, providing care and leadership wherever she was. Upon return to San Francisco in 1943, Togasaki reopened her practice and served her community for the next 40 years.

NPF's Women in Parks initiative supports programs and projects that share the stories of visionary women like Togasaki: trailblazers who dared to imagine a different future. Highlighting the contributions women have made to our country and the role they continue to play in our ever-evolving narrative, Women in Parks projects help the National Park Service share a more comprehensive and inclusive American story.

An immigrant to the U.S. from China, Chien-Shiung Wu contributed to the Manhattan Project and experimental physics. Born in 1912, Wu graduated top of her class with a degree in physics from the National Central University in Nanking, China. After working in a physics lab in China, Wu enrolled at the University of California Berkeley, working under Nobel Prize winning physicist Ernest Lawrence.

In 1944, Wu took a job at Columbia University and joined the Manhattan Project, where her research improved Geiger counters for radiation detection and the enrichment of uranium in large quantities. The work of the Manhattan Project was conducted in numerous places across the country and today, Manhattan Project National Historical Park preserves three of these locations in Tennessee, New Mexico, and Washington.

After World War II, Wu continued to be a leader in physics. She was the first to confirm Enrico Fermi's theory of beta decay, and the Wu Experiment, which tested the conservation of parity during beta decay, was her design. However, as with many of the contributions women made to science at the time, her work with the experiment was not acknowledged. The project for which the Wu Experiment was designed won physicists Tsung-Dao Lee and Chen Ning Yang a Nobel Prize in 1957, but Wu's contributions were not honored. Wu later went on to be elected to the National Academy of Sciences and was the first woman to be president of the American Physical Society and the first person to receive the Wolf Prize in Physics. After her death in 1997, her ashes were buried in the courtyard of her father's school she attended as a young girl.

Portland-born Leah Hing was the first U.S.-born Chinese American woman to earn a pilot's license. Born in 1907 in Oregon, Hing took her first airplane ride at a school for Chinese American aviators while on tour with her band, Portland Chinese Girls' Orchestra. In 1932, John Gilbert "Tex" Rankin, a national figure in the world of aviation and head of a flying school, met Hing at her father's restaurant and invited her to "take up flying." She received her pilot's license in 1934 from Rankin's small school based at Pearson Field, one the country's oldest continuously operating airfields, now a part of Fort Vancouver National Historic Site.

Hing flew passengers (one at a time in her two-seater biplane!) in the Portland-Vancouver area and became an accomplished and capable flier and in 1939 joined The Ninety-Nines, an organization for women aviators founded by Amelia Earhart. During World War II, Hing worked with the West Coast Civil Air Patrol helping with repairs of navigational equipment and ground training.

After 1941, Hing ended her flying career but remained active in her community. Unable to join Portland's social club for private pilots and aviation enthusiasts, the Aero Club, because she was Chinese, Hing worked there as a switchboard operator, photographer, and receptionist. She also raised money for the elderly, coached girls' basketball, and helped immigrants in her community to become U.S. citizens.

These stories provide a glimpse into the countless lives and histories of Asian Americans, Native Hawaiians, and Pacific Islanders that are connected to our national parks. There are many more stories to discover.

We invite you to explore these and other stories preserved in parks as we continue to reflect upon our past, engage with the present, and imagine the future.

Endnote: In this feature, NPF uses the language Asian Americans, Native Hawaiians, and Pacific Islanders. While the intent is to honor inclusivity and be representative of various ways that people identify, we recognize that this language does not account for all identities. We recognize the importance and need of specificity in reference to distinct communities. We also recognize that the stories highlighted in this feature do not account for all identities and we will continue to elevate more stories and help expand the history preserved and shared in national parks.

ABOUT THE NATIONAL PARK FOUNDATION The National Park Foundation works to protect wildlife and park lands, preserve history and culture, educate and engage youth, and connect people everywhere to the wonder of parks. We do it in collaboration with the National Park Service, the park partner community, and with the generous support of donors, without whom our work would not be possible. Learn more at nationalparks.org. 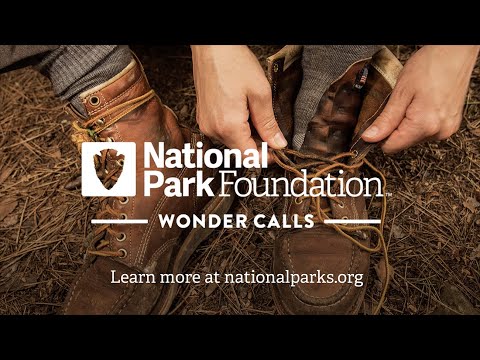