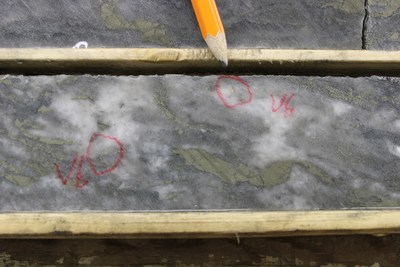 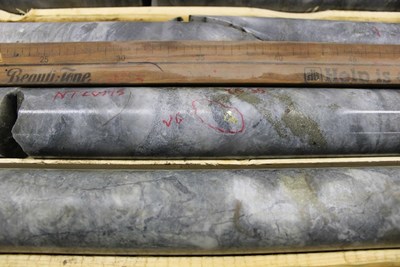 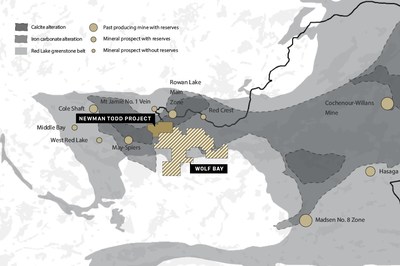 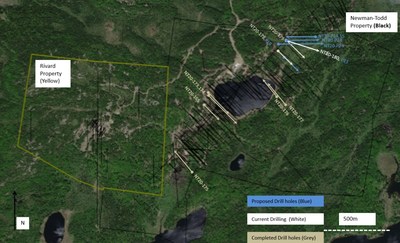 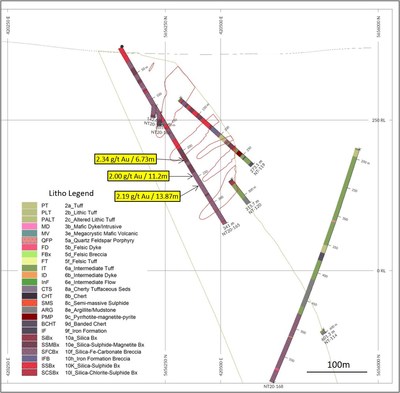 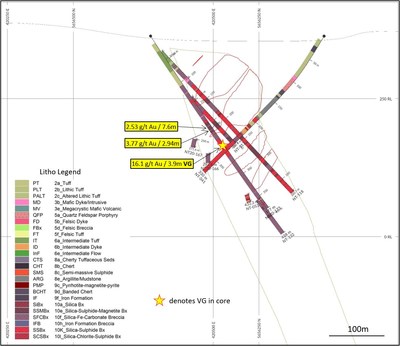 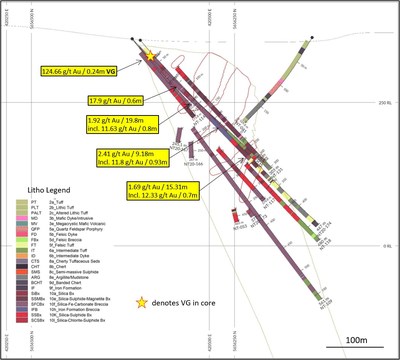 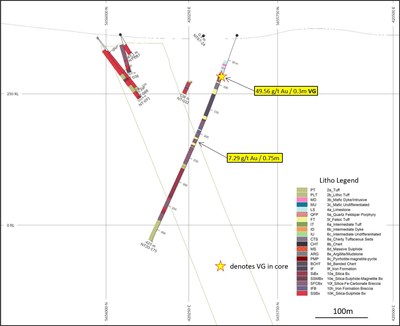 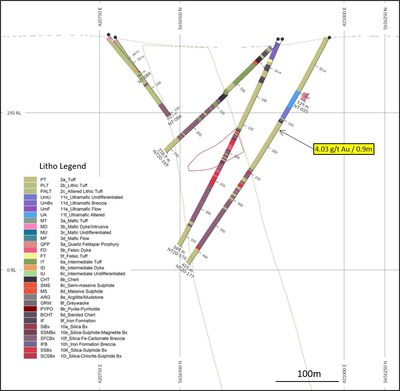 Newman Todd continues to deliver high grade gold and VG. Our initial drill program has been very successful, with well mineralized zones, of significant width and grade, intersected in every hole drilled to date, including several intercepts containing VG. A total of 9 drillholes (3,823m) were completed by the Christmas break. This brings the total current drilling at Newman Todd in 2020 to 6,027m in 16 drillholes, the first drilling since 2013 on the property.

"This follow-on phase of drilling has continued to uphold our re-interpretation of the controls of the high-grade gold mineralization at Newman Todd" states William Paterson, Trillium Gold's Vice President of Exploration, "and with updated modeling I expect this to continue allowing us to enhance the overall project. The VG intercept in hole NT20-175 shows us that there is still more gold to be found outside of the NT zone, in the hangingwall."

Russell Starr, CEO of Trillium Gold comments "Our geologists have done an incredible job in a very short period of time re-interpreting historical drill results and targeting high grade and VG at Newman Todd. Being able to follow Rivards high grade veins into the Newman Todd structure and encounter VG is an exceptional feat. Having an geological team with more than 100 years combined Red Lake exploration and production experience running our drill program should give shareholders further confidence for our upcoming 25,000 - 35,000 meter program."

Hole NT20-175 was drilled on the west flank of the property, targeting a silicified zone hosted within a limestone/stromatolite unit from 52.88m to 88.5m depth.  A large clot of visible gold was noted at 86.35m in this zone that assayed 49.56 g/t gold (Au) over 0.3m (Figure 2). Elevated assay results were also documented from historical drill holes intersecting this structure east of NT20-175.

Holes NT20-176 and NT20-177 were drilled to follow up on results from NT20-169. Hole NT20-176 intersected a mineralized chert unit, followed by sections of silica-sulphide breccia with significant pyrite, magnetite and pyrrhotite mineralization, and a narrow zone of quartz veining with galena and pyrite in a felsic unit at the bottom of the drill hole. Final assay results for this hole are pending.

New significant assay composite results are compiled in Table 1. For a listing of the significant results obtained from the first Phase of the drilling program please refer to the press release dated October 28, 2020.  Sections for drill holes presented are appended at the end of this release.

The Newman Todd Zone is currently a 2.2km long and up to 200 metre-wide structural target which is situated in the Red Lake Gold Camp. Drilling from 2013 and earlier had mostly focused on testing the zone by targeting the footwall with drilling toward the southeast, now known to be sub-parallel to gold mineralized veining and structures, as seen on the Rivard property immediately to the west, and potentially missing high-grade intersections or undercutting much of the targeted zone. Newman Todd is a highly prospective target with 41% of the 165 historic drill holes having intervals of greater than 20 g/t gold over various lengths. In addition, nearly all drilling has been to depths less than 400m. The Red Lake Camp is famously known for high grade gold mineralization at depth with Evolution Mining's Red Lake Gold Mine currently reaching depths of several thousands of feet. Trillium will continue to test various drill orientations in order to develop a comprehensive understanding of the mineralization and structural controls and test the depth potential of the Newman Todd Zone. Figure 3 below shows the location of the Newman Todd Project as well as its relative location to the producing and past producing mines within the Red Lake Camp.

All drilling was supervised by Paul Barc, PGeo. The drilling was conducted by Rodren Drilling Ltd., of West St. Paul, Manitoba. Drill core was logged and sampled in a secure core facility on site. Core samples from the program were cut in half, using a diamond cutting saw, and half cores were sent for analysis to the SGS Laboratory in Red Lake, ON, an accredited mineral analysis laboratory. All samples were analysed for gold using standard Fire Assay-AA techniques. Samples returning over 10.0 g/t gold were analysed utilizing standard Fire Assay-Gravimetric methods. Duplicate assays of approximately 5% of the samples were also obtained from the coarse reject of the original sample. Selected samples with results greater than one ounce per ton gold were also analyzed with a standard 1 kg metallic screen fire assay. Certified gold reference standards and blanks are routinely inserted into the sample stream, as part of Trillium Gold's quality control/quality assurance program (QAQC) to monitor accuracy and precision. No QAQC issues were noted with the results reported herein. All drill intercepts reported are down-hole core lengths, which does not necessarily represent true widths.

The technical information presented in this news release has been reviewed and approved by William Paterson QP, PGeo, VP of Exploration of Trillium Gold Mines., as defined by NI 43-101.

On behalf of the Board of Directors,

This news release contains forward-looking information, which involves known and unknown risks, uncertainties and other factors that may cause actual events to differ materially from current expectation. Readers are cautioned not to place undue reliance on these forward-looking statements, which speak only as of the date of this press release. The Company disclaims any intention or obligation, except to the extent required by law, to update or revise any forward-looking statements, whether as a result of new information, future events or otherwise.

Trillium Gold Announces Potential to Expand Quantity and Grade of ...