KYIV, Ukraine, Sept. 29, 2020 /PRNewswire/ -- On the 79th anniversary of the Babyn Yar massacre, Ukraine's government signed a memorandum of understanding and cooperation with Babyn Yar Holocaust Memorial Center (BYHMC), to promote the construction of a fitting memorial to the tragedy. Meanwhile, at an online memorial ceremony, new research was presented, revealing previously unknown details of the Babyn Yar massacre.

The Babyn Yar tragedy was one of the largest instances of mass-murder during the Holocaust.  33,771 Jewish victims were shot at the Babyn Yar ravine by the Nazis in just two days, 29 and 30 September 1941, while tens of thousands of Ukrainians, Roma, mentally ill and others were shot thereafter throughout the occupation of Kyiv.

The memorandum was signed by Minister of Culture and Information Policy of Ukraine Tkachenko Olexandr and BYHMC Supervisory Board member Ronald S. Lauder. The signing took place at Babyn Yar after the official memorial ceremony to commemorate the anniversary.

Ukraine's President Volodymyr Zelensky, who attended the official memorial ceremony commented, "We must not forget the tragedy of Babyn Yar. We understand that this is the history not only of Ukraine and of the Jewish people, but a tragic history of the whole world. People, especially youth, should be able to come and see the place where thousands of Jews were shot, to really remember one of the greatest tragedies of the twentieth century. We must all understand that this cannot happen in the modern world, or in the future. Never again."

BYHMC Supervisory Board member and President of World Jewish Congress Ronald S. Lauder said, "This was one of the greatest mass murders in history, and then a second crime – covering it all up. Almost 80 years after this happened, these tortured souls will finally be remembered with an International Memorial Museum – a museum that will also tell the history of the holocaust. Ukraine takes a giant step forward today – towards remembrance and towards justice. We have never forgotten, and now the entire world, thanks to all of you, will not forget either."

Later in the day, global leaders participated in an online memorial ceremony hosted by BYHMC. Although the museum is due to open its doors in 2026, BYHMC already operates twelve education and commemoration programs. A selection of current research initiatives were presented at the ceremony, which have yielded new discoveries about the Babyn Yar massacre. The Names Project has uncovered the identities of more than 900 previously unknown Babyn Yar victims. A separate program has utilized state of the art topographic, forensic tools, and historic photos to identify the exact location of the massacre for the first time, recreating the area in a 3D model.

Chair of the supervisory board at BYHMC, human rights icon Natan Sharansky recalled growing up in Soviet-ruled Ukraine, where the memory of Babyn Yar was intentionally suppressed. He said, "Babyn Yar is a symbol of the Soviet Union's efforts to physically erase memory. They took the most tragic part of our history and tried to make it disappear. Thanks to an independent Ukraine, the policy was fully changed towards the memory of the Holocaust."

Chair of Yad Vashem Avner Shalev said, "The Soviet Union didn't want to tell the story of the killing of Jews… We knew a bit, but the main part of the story was brushed away. This is the importance of Babyn Yar." Addressing a recently signed archive sharing agreement between Yad Vashem and BYHMC, he commented "New information and new collaboration will give us a new dimension to fight together for the truth. It is a very important collaboration."

Former US Senator Joe Lieberman commented, "Even today, as we solemnly acknowledge the 79th anniversary of the Nazis' barbaric acts at Babyn Yar, we are faced with a world where intolerance, bigotry, hatred and even genocide still rear their horrific heads.  It is up to each one of us to fight against such evil."

The Babyn Yar Holocaust Memorial Centre is a non-governmental charity whose purpose is to preserve and cultivate the memory of the Holocaust and the Babyn Yar tragedy in Ukraine by turning the Babyn Yar area into a place of remembrance. The Foundation's mission is to worthily honour the memory of the victims of the tragedy and to contribute to the humanization of society through preserving and studying the history of the Holocaust. The creation of the memorial centre was initiated by a group of international organisations and independent philanthropists who sit on the Foundation's supervisory board. The Babyn Yar Holocaust Memorial Centre is a non-governmental organisation which aims to build a centre for education, documentation and remembrance, dedicated to the tragic events of September 1941. 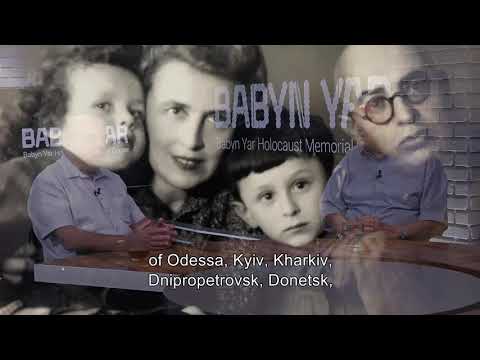