NEW YORK, Sept. 8, 2020 /PRNewswire/ -- The Vilcek Prize for Excellence in Public Service is awarded to entrepreneur, author, and non-profit leader Andrew Yang. Born in the United States to immigrants from Taiwan, Andrew is the founder of the non-profit organizations Venture for America and Humanity Forward and author of the New York Times bestselling books Smart People Should Build Things and The War on Normal People. Andrew receives the Vilcek Prize for Excellence in recognition of his leadership in advancing ideas addressing issues ranging from wealth inequality, to understanding how corporations use individuals' personal data, to autism awareness in the United States. 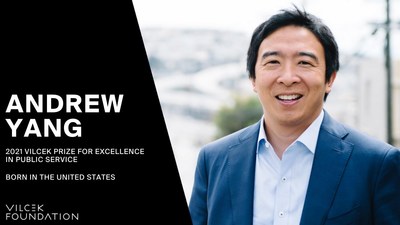 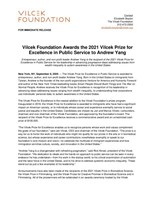 "The Vilcek Prize for Excellence enables us to recognize persons whose work and values complement the goals of our foundation," said Jan Vilcek, CEO and chairman of the Vilcek Foundation. "The prize is a way for us to honor the work of individuals who might not qualify for our prizes in the arts or in biomedical science, but whose experience and career contributions nonetheless exemplify or speak to our foundation's core mission and vision—to celebrate the multitude of immigrant experiences and how immigration enriches culture, society, and innovation in the United States."

"Andrew Yang is a changemaker with refreshing pragmatism," said Rick Kinsel, president of the Vilcek Foundation. "His dedication to ideals and his hands-on approach to public service can be seen in every endeavor he has undertaken—from his work in the startup world, to his critical examination of automation and the labor force in the United States, and to his drive to address systemic economic inequality. These stand out as just a few examples of his leadership."

The Vilcek FoundationThe Vilcek Foundation raises awareness of immigrant contributions in the United States and fosters appreciation of the arts and sciences. The foundation was established in 2000 by Jan and Marica Vilcek, immigrants from the former Czechoslovakia. The mission of the foundation, to honor immigrant contributions to the United States, and more broadly, to foster appreciation of the arts and sciences, was inspired by the couple's respective careers in biomedical science and art history. Since 2000, the foundation has awarded over $5.6 million in prizes to foreign-born individuals and supported organizations with over $5 million in grants.