AMARILLO, Texas and EVANSTON, Ill., April 11, 2019 /PRNewswire/ -- Merrick Pet Care, Inc., announced today that it is launching a new campaign – "Dogs are in Charge" – to recognize and celebrate the special and amusing ways pet parents express their love for their four-legged family members. The campaign taps into the universal truth that dogs are the ones in charge, and reminds pet parents why the rulers of their household deserve the best food ever. 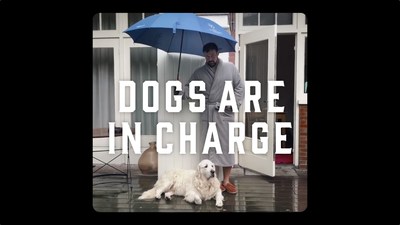 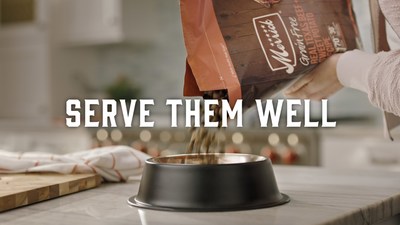 A recent survey of more than 1,000 pet parents (defined as dog owners), which was commissioned by Merrick Pet Care and conducted online by The Harris Poll, confirmed that dogs are truly in charge. Nearly 7 out of 10 dog parents (69%) agreed that their dog is their favorite member of the household – and female dog owners are more likely than their male counterparts to feel this way (75% vs. 63%). The vast majority of pet parents (92%) agree that their dog is a part of the family, and their four-legged family members are enjoying the benefits of this special position in the household – most pet parents allow their dog on their furniture (73%) and let their dog sleep in their bed (66%).

"We love our dogs so much that we let them take control of our bed, the couch and our lives," said Barbara Liss, Vice President of Marketing for Merrick Pet Care. "Our new campaign aims to raise awareness for the Merrick brand and connect with pet parents around the relatable truth that dogs reign supreme."

Dogs have run the show at Merrick since the beginning. In 1988, Garth Merrick began home-cooking food for his beloved dog, Gracie, to make sure she was eating the most wholesome and nutritious food possible. Since then, Merrick has continued to serve pets well with the best recipes made with real whole foods and leading levels of protein.

"We put a lot of time and energy into crafting the best food ever for dogs and cats. We hand-stuff baby carrots, chicken wings and other high-quality ingredients in select recipes because we believe real, whole foods are better for the pet that rules our house," added Liss.

Merrick Launches 'Dogs are in Charge' CampaignThe campaign, which was developed by The Escape Pod, features relatable, real-life examples to illustrate how dogs are truly in charge.

"In the past, dogs worked for people. They herded our sheep and guarded our yards. But today, we bring them food, we bathe them, and give them the best seat on couch," said Derek Sherman, Executive Creative Director for The Escape Pod. "Clearly, the paradigm has reversed, and dogs are firmly in charge. We set out to prove this with our new campaign for the Merrick brand."

The launch video (https://www.facebook.com/watch/?v=280195159575198) features user-generated videos and content where dogs are unapologetically laying claim to their domain. It opens with a lovable pup floating on a pool raft, cuts to an adorable French Bulldog getting comfortable in his parents' bed and ends with a Great Dane taking a comfortable seat on her mom as she practices yoga. A series of scenes showing pups demanding attention by slamming – or pawing – their parent's laptop shut is further emphasized with a voiceover that states that dogs are in charge. The video closes with a look at the higher-quality ingredients, real whole foods and deboned meat that Merrick uses in their recipes and a plea to pet parents to serve them well; when people see dogs this way, this is the food they serve them.

The Dogs are in Charge campaign will be supported with radio, online video, digital banner ads and social channels. To learn more, visit www.DogsAreInCharge.com.

New Survey Finds that Dogs are in ChargeThe Merrick / Harris Poll survey asked pet parents about the loving, thoughtful and hilarious things they do for their dogs. And, the results further confirm that dogs are the ones who are running their world:

The survey was conducted online within the United States by The Harris Poll on behalf of Merrick Pet Care, Inc., from March 28 – April 1, 2019 among 2,020 U.S. adults ages 18 and older, of which 1,079 were dog owners. This online survey is not based on a probability sample and therefore no estimate of theoretical sampling error can be calculated. Complete survey methodology, including weighting variables and subgroup sample sizes, is available upon request.

About Merrick Pet Care, Inc.Founded in Hereford, Texas, in 1988, Merrick Pet Care, Inc. is a leader in natural and organic pet food. With a mission to make the most wholesome and nutritious food that pets deserve, Merrick goes to great lengths to craft recipes with real, whole foods and the freshest ingredients without additives, sweeteners, colors or preservatives. Dedicated to the pet specialty channel, the company offers a wide variety of high-quality dry and wet foods, as well as treats, for dogs and cats across its premium product portfolio, which includes the Castor & Pollux, Zuke's and Whole Earth Farms brands alongside its signature Merrick brand. For more information about Merrick, visit www.MerrickPetCare.com.