ATLANTA, Oct. 7, 2020 /PRNewswire/ -- Wholesale used-vehicle prices (on a mix-, mileage-, and seasonally adjusted basis) decreased 1.58% month over month in September, the first month-over-month drop in wholesale values since May. The Manheim Used Vehicle Value Index for September was 161.2, a 15.2% increase from a year ago.

Manheim Market Report (MMR) prices declined at an accelerating pace over the four full weeks of September, resulting in a 2.9% cumulative decline on the Three-Year-Old Index. In the last full week of September, the Three-Year-Old Index declined 0.9%, which was the biggest weekly decline in 22 weeks. MMR Retention, which is the average difference in price relative to current MMR, averaged 99.5% for the four full weeks of September. The sales conversion rate averaged 58.8% over the same period, which was a decline from August and much more typical for this time of the year.

U.S. Vehicle SalesAccording to Cox Automotive estimates, total used-vehicle sales volume was down 5% year over year in September. The seasonally adjusted annual rate (SAAR) of used vehicle sales in September is estimated to be 38.0 million, down from 39.8 million last September and flat compared to August. The September used retail SAAR estimate—a measure of used vehicles sold at dealerships—is 20.2 million, down from 20.7 million last year and slightly down month over month from August's 20.3 million rate.

Using a rolling seven-day estimate of supply based on vAuto data, used retail supply peaked at 115 days on April 8. Normal used retail supply is about 44 days' supply. It ended September at 42 days, a bit lower than normal. Wholesale supply peaked at 149 days on April 9, when normal supply is 23. It was up to 26 days by the end of September, as the wholesale sales pace has slowed since August.

September total new vehicle sales were up 6.1% year over year, with two more selling days compared to September 2019. The September SAAR came in at 16.3 million, a decrease from last year's 17.1 million but up from August's 15.2 million rate.

Retail deliveries, on the other hand, were up 13% year over year in September, leading to an estimated retail SAAR of 14.5 million, up from 14.2 million last September and up from August's 13.8 million rate. Year to date retail deliveries are down 14% through September; fleet sales are down 41%. The overall new vehicle market is down 19% year-to-date in 2020.

About Manheim Manheim, the nation's leading provider of end-to-end wholesale vehicle solutions, is celebrating 75 years as an industry innovator, driving success for clients, the company, its employees and the industry. The dream of five men who auctioned off a handful of cars in 1945 from a single-lane location in Manheim, Pennsylvania launched a company that today offers 7 million used vehicles annually and facilitates transactions representing nearly $67 billion in value with the grit and determination of our team members. Through its physical, mobile and digital sales network, Manheim offers services for decisioning, buying and selling, floor planning, logistics, assurance and reconditioning. Operating the largest vehicle wholesale marketplace, Manheim provides clients with more efficient ways to connect and transact business how and when they want. Headquartered in Atlanta, Manheim is a Cox Automotive™ brand. For more information, visit http://press.manheim.com

About Cox AutomotiveCox Automotive Inc. makes buying, selling, owning and using cars easier for everyone. The global company's 34,000-plus team members and family of brands, including Autotrader®, Clutch Technologies, Dealer.com®, Dealertrack®, Kelley Blue Book®, Manheim®, NextGear Capital®, VinSolutions®, vAuto® and Xtime®, are passionate about helping millions of car shoppers, 40,000 auto dealer clients across five continents and many others throughout the automotive industry thrive for generations to come. Cox Automotive is a subsidiary of Cox Enterprises Inc., a privately-owned, Atlanta-based company with annual revenues of $21 billion. www.coxautoinc.com 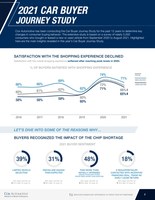 Ten Predictions for 2022: Cox Automotive Looks Forward Into the...