SECAUCUS, N.J., Aug. 25, 2020 /PRNewswire/ -- The rate of workforce drug positivity hit a sixteen-year high in 2019, according to a new analysis released today by Quest Diagnostics (NYSE: DGX), the world's leading provider of diagnostic information services. Positivity rates in the combined U.S. workforce increased in urine drug tests, climbing to the highest level since 2003 (4.5%) and more than 28% percent higher than the thirty-year low of 3.5 percent recorded between 2010 and 2012. 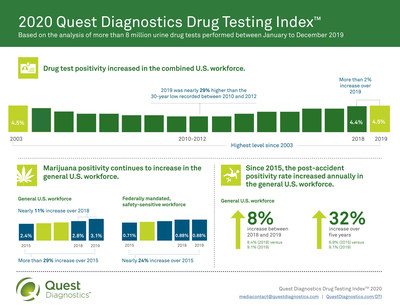 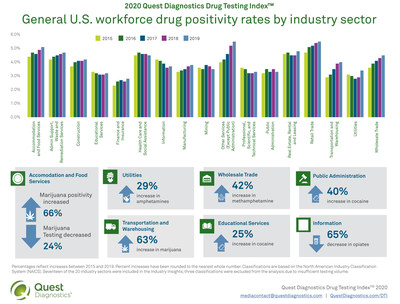 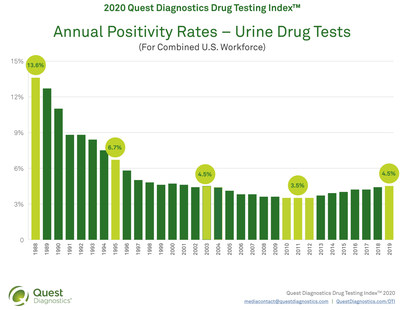 In addition to overall increases in workforce drug positives, specific regions of the United States, particularly the Midwest, experienced dramatic increases in positivity for cocaine and methamphetamine as well as marijuana.

The new findings of the Quest Diagnostics Drug Testing Index™, which include an analysis of industry-specific data, were unveiled in advance of the Substance Abuse Program Administrators Association (SAPAA) virtual conference taking place on August 25, 2020.

For an interactive map with positivity rates and trend lines by three-digit zip code in the United States, visit DTIDrugMap.com.

The Quest Diagnostics findings generally align with other research. Drug deaths in the United States rose 5 percent in 2019, driven largely by methamphetamine, cocaine and fentanyl, following a decline in 2018. During the first few months of 2020, drug deaths increased about 13 percent compared with last year, attributable partly to social isolation and other disruptions caused by COVID-19.i

"There is no question that before COVID-19, rates of workplace drug positivity were trending in the wrong direction, based on our Quest Diagnostics data, The enormous strain caused by COVID-19 may prove to be an accelerant on this disturbing trend," said Dr. Barry Sample, senior director of science and technology, Quest Diagnostics. "Organizations will need to consider the impact of COVID-19 not only on workplace safety but also as a health concern for their employees for some time to come."

"Testing with multiple specimen types can reveal a fuller understanding of patterns of misuse than one alone," said Dr. Sample. "Our data suggests that testing for methamphetamine with hair and oral fluid may be appropriate for employers with concerns about misuse of this particular drug to complement the standard urine drug screen."

Marijuana continues to top the list of the most commonly detected illicit substances across all workforce categories (general U.S. workforce; federally mandated, safety-sensitive workforce; and combined U.S. workforce, which includes the prior two populations) and specimen types (urine, oral fluid, and hair).

"Marijuana continues to be an enduring presence in the U.S. workforce. Changing attitudes toward its use could pose heightened risks especially in safety-sensitive positions and those states exploring legalization," said Dr. Sample.

Positivity rates for heroin continue to decline in general U.S. and federally mandated, safety-sensitive workforce testingUrine drug test results for the general U.S. workforce for heroin use, indicated by the presence of the 6-acetylmorphine (6-AM) metabolite, declined 33 percent (0.03% in 2018 versus 0.02% in 2019) and 50 percent decline since its peak in 2015 and 2016 (0.04%).

Workforce positivity increases significantly in multiple industriesThe Quest Diagnostics Drug Testing Index Industry Insights of general U.S. workforce positivity rates, based on more than 18 million urine drug test results (between 2015 and 2019), shows year-over-year increases in overall workplace drug positivity in 15 of the 17 sectors reported. The Retail Trade industry had the highest overall positivity rate (4.7% in 2015, 5.1% in 2016, 5.3% in 2017, 5.4% in 2018 and 5.5% in 2019) across all five years of the analysis.  The Other Services (not including Public Administration) category, which includes services not listed in the other categories such as grantmaking, advocacy, and providing personal services, also had a 5.5% positivity rate in 2019.  The Accommodations and Food Service category had the highest workforce positivity for marijuana, at 4.8%, a relative increase of 65 percent over five years (2.9% in 2015 versus 4.8% in 2019).

Workforce Drug Testing WebinarBarry Sample, PhD, senior director of science and technology, for Quest Diagnostics will discuss the latest data and analysis from the Drug Testing Index via a webinar on Thursday, September 10, 2020 at 2:00 PM EDT. Click here to register and attend.

About the Quest Diagnostics Drug Testing Index™The Quest Diagnostics Drug Testing Index™ (DTI) is a series of reports that provide insights into trends in workforce drug use, based on positivity results for de-identified laboratory testing performed by Quest Diagnostics for a range of illicit, legal and prescription drugs. It examines test results according to three categories of workers: federally mandated, safety-sensitive workers; the general workforce; and the combined U.S. workforce. Federally mandated, safety-sensitive workers include pilots, bus and truck drivers, and workers in nuclear power plants, for whom routine drug testing is mandated by the U.S. Department of Health and Human Services.

The strengths of the DTI analysis include its large, nationally representative sample size, longitudinal monitoring, a testing population that is generally reflective of the U.S. workforce and the quality of the company's drug testing services to confirm positive results. Limitations include analysis only of employers that perform drug testing with the company, and a lack of exact cross-specimen comparisons due to variations in substances for which employers test. Quest Diagnostics has analyzed annual workplace drug testing data since 1988 and publishes the findings as a public service.

In addition to workplace drug testing, Quest is a leader in clinician-ordered drug testing services through its Clinical Drug Monitoring program to aid the detection of potentially dangerous forms of prescription and illicit drug use. For more information on Quest's drug monitoring services for healthcare providers, visit QuestDrugMonitoring.com

About Quest DiagnosticsQuest Diagnostics empowers people to take action to improve health outcomes. Derived from the world's largest database of clinical lab results, our diagnostic insights reveal new avenues to identify and treat disease, inspire healthy behaviors and improve health care management. Quest annually serves one in three adult Americans and half the physicians and hospitals in the United States. Our 47,000 employees understand that, in the right hands and with the right context, our diagnostic insights can inspire actions that transform lives. www.QuestDiagnostics.com.