POTTSVILLE, Pa., March 10, 2020 /PRNewswire/ -- D.G. Yuengling & Son, Inc., America's Oldest Brewery®, announced today its multi-year partnership with the Philadelphia Phillies and new designation as an "Official Lager of the Philadelphia Phillies." As a sponsor of the Phillies since 2017, this extended partnership will continue to bring together two beloved Pennsylvania icons and provide new ways for fans to cheer on the Phillies. 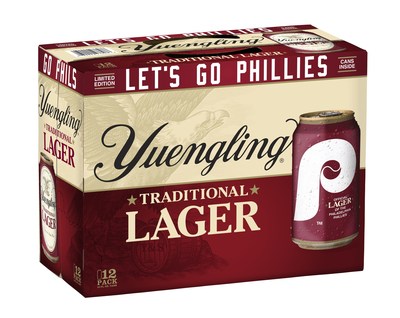 Ahead of the 2020 regular baseball season, Yuengling will roll out new, limited-edition Phillies Yuengling Lager cans emblazoned with the retro Phillies logo. Whether at home or at Citizens Bank Park, fans of Yuengling and the Phillies can enjoy the delicious and iconic taste of Yuengling Traditional Lager, while proudly showing support for their favorite baseball team. These special Phillies Yuengling Lager cans will be available on shelves in 12-pack cans in select markets, or at Citizens Bank Park in 16-ounce cans.

"We're so thrilled to combine America's Oldest Brewery and America's favorite pastime, both rooted in history and tradition, through our long-term partnership with the Philadelphia Phillies," said Wendy Yuengling, Chief Administrative Officer and 6th generation family member, D.G. Yuengling & Son, Inc. "As an 'Official Lager of the Philadelphia Phillies,' we not only get to celebrate our Pennsylvania roots, but we also have the ability to bring unique, customized experiences to Yuengling and Phillies fans, whether in-game or at-home."

Yuengling will also extend its partnership with Philadelphia Phillies' pitcher and brand ambassador Aaron Nola, the first active MLB player to have a partnership with a beer brand. The partnership with Aaron Nola includes a variety of elements including personal appearances on behalf of the brand, fan meet & greets, special promotions to meet the Philly All-Star, a chance to win a Yuengling Phillies home vending machine, social media sweepstakes and giveaways, local Philadelphia advertising and support of Aaron's 2020 local community efforts.

"Over the past year, I've had a lot of fun working with Yuengling and getting to know the family behind America's Oldest Brewery," said Aaron Nola. "I'm excited to continue my partnership with Yuengling in an even bigger way, and I couldn't think of a better way to kick off the season than with these cool Lager cans."

Along with the Aaron Nola partnership and team cans, Yuengling will provide fans with even more immersive experiences and integrate new marketing and logo rights into promotional materials, including:

"Yuengling is a terrific partner and an important part of our ballpark's off-the-field lineup," said David Buck, Phillies Executive Vice President. "As we kickoff our 2020 season, we are excited that our fans will once again be able to enjoy the iconic taste of America's Oldest Brewery, both at the ballpark or in their own home, all while cheering for their favorite baseball team."

About The PhilliesThe Philadelphia Phillies are a Major League Baseball team. They are the oldest continuous, one name, one city franchise in all of professional American sports, dating to 1883. The Phillies are a member of the Eastern Division of Major League Baseball's National League. Since 2004, the team's home has been Citizens Bank Park in the South Philadelphia section of the city. For more information, visit phillies.com.