SONOMA, Calif., April 23, 2018 /PRNewswire/ -- Under blue skies on the sun-drenched track of Sonoma Raceway, Brigham Young University of Provo, Utah earned top honors in their category at the 12th edition of the Shell Eco-marathon Americas competition, recording 1,985.4 miles per gallon with its ultra-energy-efficient "BYU SMV" internal combustion Prototype vehicle. Among the 98 student teams, half were powered by renewable energy sources. 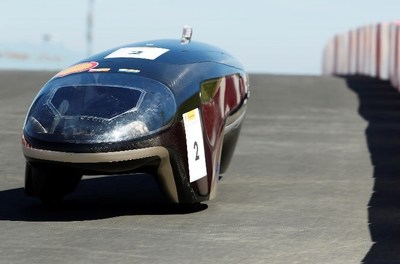 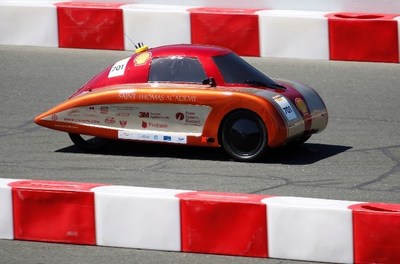 More than 1,200 students from Argentina, Brazil, Canada, Colombia, Ecuador, Guatemala, Mexico, Peru, Puerto Rico and the United States participated in the 2018 event. They were joined by thousands of visitors who packed Sonoma Raceway to enjoy numerous activities focused on the future of energy and mobility. Visitors included nearly 600 students from many nearby California Public Schools Community Districts.

Competitors worked diligently from Thursday through Sunday fine-tuning their custom-built vehicles. Students were required to pass strenuous technical inspections before testing their vehicles on the Sonoma Raceway track to ensure they were ready for the competition. In order to record a successful run, each team's car was required to make 7 laps for a total distance of 6.4 miles within 25 minutes around the iconic Sonoma Raceway.

Returning to the Americas for the third year is the Drivers' World Championship – a competition of the top performing UrbanConcept Americas teams who earned the right to compete on Sunday, April 22, in the Shell Drivers' World Championship Regional Final. The top three finishers of the Americas regional run locked up a chance to compete amongst winning teams from Asia and Europe, July 5-8, 2018, in London.

These teams will now prepare to compete for the Drivers' World Championship Grand Final Title and earn the exclusive opportunity for a once-in-a-lifetime experience at the home of Scuderia Ferrari in Italy.

Shell Eco-marathon General Manager Norman Koch noted, "The Drivers' World Championship demands the best in vehicular innovation and automotive technology to push the boundaries of energy efficiency. Sharp skills and a sound strategy in handling the vehicle and managing fuel efficiency are imperative in helping the winning team cross the finish line first. We saw amazing action and excitement today and my congratulations goes to all the teams."

The Americas winners in each class follow, based on vehicle class and energy category:

Teams also won prizes for their work off-track, in the following categories:

About Make the Future Festivals

Make the Future Festivals is Shell's global platform for conversation, collaboration and innovation around the world's energy challenges. With events hosted in countries around the globe, they aim to provide an opportunity for multiple stakeholders: including students, entrepreneurs, businesses, governments and the public, to experience, test and contribute bright energy ideas.

Shell Eco-marathon is a global program built to offer students hands-on opportunities to develop ideas and technology, knowledge and skills, within an arena of competition.

Currently held in Asia, the Americas and Europe and made up of two key competitions: Shell Eco-marathon Mileage Challenge, and Drivers' World Championship, students from countries across their respective regions use innovative problem-solving skills to design and build their own cars. Looking at every aspect of design and technology, students compete to prove that their bright ideas will produce the most energy-efficient vehicle when tested on the track.

Shell Oil Company is an affiliate of the Royal Dutch Shell plc, a global group of energy and petrochemical companies with operations in more than 70 countries. In the U.S., Shell operates in 50 states and employs more than 20,000 people working to help tackle the challenges of the new energy future. Shell Oil Company is a leading oil and gas producer in the deepwater Gulf of Mexico, a recognized pioneer in oil and gas exploration and production technology and one of America's leading oil and natural gas producers, gasoline and natural gas marketers and petrochemical manufacturers.

The companies in which Royal Dutch Shell plc directly and indirectly owns investments are separate legal entities. In this release "Shell", "Shell group" and "Royal Dutch Shell" are sometimes used for convenience where references are made to Royal Dutch Shell plc and its subsidiaries in general. Likewise, the words "we", "us" and "our" are also used to refer to Royal Dutch Shell plc and subsidiaries in general or to those who work for them. These terms are also used where no useful purpose is served by identifying the particular entity or entities. ''Subsidiaries'', "Shell subsidiaries" and "Shell companies" as used in this release refer to entities over which Royal Dutch Shell plc either directly or indirectly has control. Entities and unincorporated arrangements over which Shell has joint control are generally referred to as "joint ventures" and "joint operations", respectively.  Entities over which Shell has significant influence but neither control nor joint control are referred to as "associates". The term "Shell interest" is used for convenience to indicate the direct and/or indirect ownership interest held by Shell in an entity or unincorporated joint arrangement, after exclusion of all third-party interest.

We may have used certain terms, such as resources, in this release that United States Securities and Exchange Commission (SEC) strictly prohibits us from including in our filings with the SEC.  U.S. Investors are urged to consider closely the disclosure in our Form 20-F, File No 1-32575, available on the SEC website www.sec.gov.